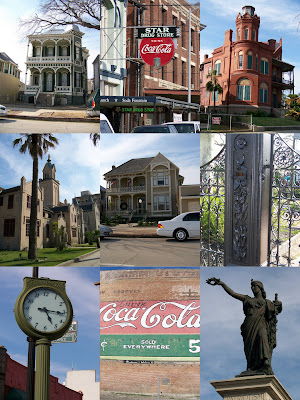 After playing in the pool and taking a long walk on the beach. The boys and I headed into Galveston city center to check out the sights. Papa needed a little break to clear out his e-mail box. Unfortunately, technology can be a blessing and a nightmare. When he goes away for a week he ends up with over 200 emails in his box which can take hours to clean out, so he tries to at least stay on top of them even when we are on vacation. Galveston is more than a beach town. It really has something for everyone. There is much nature preserves on the island that is filled will the most beautiful birds, and then there is the historic district that is filled with the most amazing architecture from the Victorian period. Galveston became an active port city in 1839 and was really glamorous until its destruction with the Great Storm in 1900. The city was rebuilt but has never been what it once was. Just last year Galveston was hit with hurricane Ike and you can see the destruction all along the beach promenade. The city is so cute. I think it will be even better in a couple years when all the businesses return. It is like walking back in time. On the way home, we stopped at Ben and Jerry's for ice cream. I had to reward the boys for indulging me and being so good in the car while I drove up and done the streets. Roman has learned to say let me out. It is so funny given he still only says about 50 words. What is not funny is the way he shouts it out. Not so nice on the ears and he says it over and over. I guess most parents of small children can't skip the when are we going to get there questions and now let me out.
Labels: Texas travel