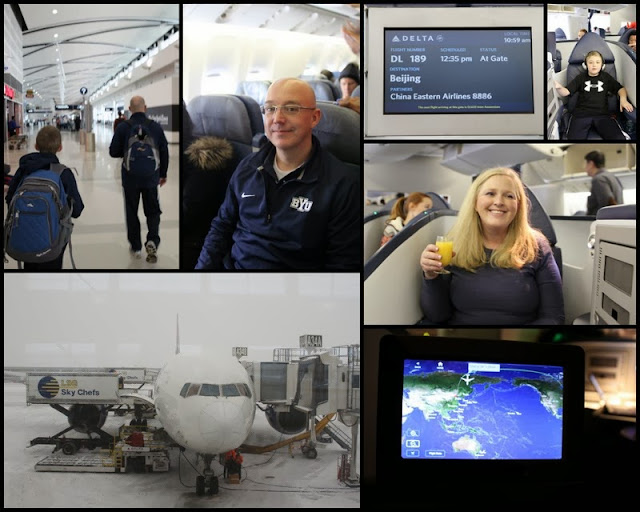 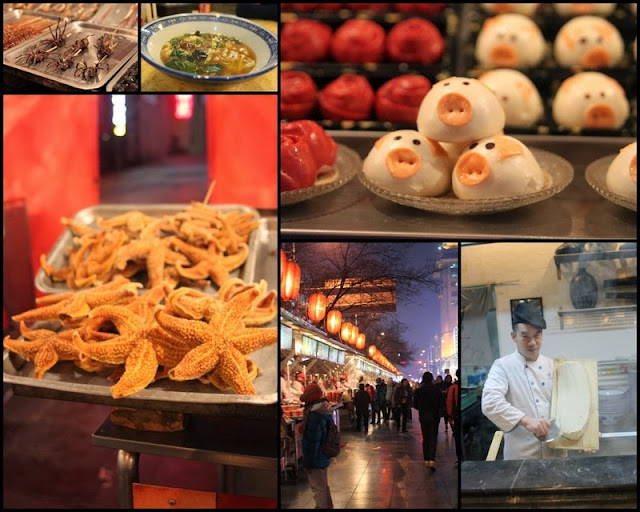 We are here!  Yesterday, we traveled to Beijing via Detroit!  What was so cool was that Delta had given my husband a free Business Class upgrade because he travels so much, and he being such a sweet husband gave me his seat.  Can you say Awesome!  Winston also got a free upgrade and loved the free ice cream sundae.  When we arrived in Beijing we were greeted by our CCAI representative Cecilla.  She was so nice; however, before we could go to our hotel we had to pick up another family The Hutchinson’s.  After checking into our hotel (Sun World Dynasty), we headed out for a bite to eat at restaurant that is adjacent to our hotel.  I ordered a bowl of noodles.  The menu called them Stress Noodles.  The chef has a giant piece of dough laid out on a board that he grates into a giant pot of broth.  Frank ordered the Kung Po chicken and Winston the beef and scallion noodles.  Winston really wanted to see the night market, so after eating we walked down the street.  The smell from the coal hits your nose instantly.  It is cold here in Beijing.  As we rounded the corner of the Catholic church a group of men and woman were dancing in the square.  It was rather pretty to watch them as they had colored lights on their fingers.  The night market sure offers a list of interesting food choices such as, scorpion, tarantula, silk worms, snake, sheep testicles and starfish.  No thanks!  On our way home a flash mob was taking place in the street and a large group of people were dancing.  It is late now and we are off to bed.  More adventures await us in the morning.
Labels: Adoption china

Amanda said…
So glad to see you made it safely! Yay!! So excited for you! Nice upgrade how awesome!!

Everything Beautiful Shay said…
Hope you have a wonderful day in Beijing! Reliving my trip through you!!! Blessings and love!
January 2, 2014 at 8:58 PM

dawn said…
Almost Avery day...woohoo.
Enjoy every second....it flies by so very fast even though some times you feel like you will never leave. Hope that makes sense.
Hugs to you as you get ready to start this fabulous new chapter.
January 2, 2014 at 9:27 PM

Kristi said…
Hooray! So glad you are safe and sound and beginning to soak in the amazing culture! Awesome that you scored business seats...one of these days I'd love to experience that myself. :)
Looking forward to seeing the next part of your adventure!
January 2, 2014 at 9:41 PM