Hello from Sicily! We made it! Cinque Terre was kind of a bust after being delayed in Milan due to some car troubles, and major traffic. What should have been a 3 hour drive ended up taking us 6 hours and by the time we reached Cinque Terre it was too late to see anything. Then next morning it was pouring down rain, but we were determined to see at least one of the 5 villages that make up Cinque Terre. I wasn’t really that impressed. I guess after seeing Positano two years ago, Cinque Terre isn’t that spectacular. If I were to ever go back, I think I would take the train. The drive is a series of switchbacks and while pretty is not as lovely as the drive along the Amalfi Coast. After leaving Cinque Terre, we headed down to Naples where we caught a ferry to Palermo, Sicily. I wanted to go to the pizza place where the Margharita pizza originated from, but my husband was worried about navigating the streets of Naples and that even if we were lucky enough to find the restaurant that it would be jammed packed with tourist. The ferry ride was smooth. It takes 12 hours from Naples to Sicily. Shortly after pulling out of Naples we passed the island of Capri. It is on my list of places to visit, but I think I will visit there without children. Now we are in Catania! Sicily is really lovely. It is dirty; however, no dirtier than Milan. The traffic on the other hand is crazy. The streets are really narrow and it appears that the traffic signs are just a suggestion. As we drove to Catania we saw Mt. Etna. I don’t think we will be visiting it up close while we are here. It has been smoking from the top and today there were some fires along the north slope of the mountain. Well, it has been a long day. Off to eat dinner. I hear Spaghetti with baby clams calling my name. Hope you are having a great week. 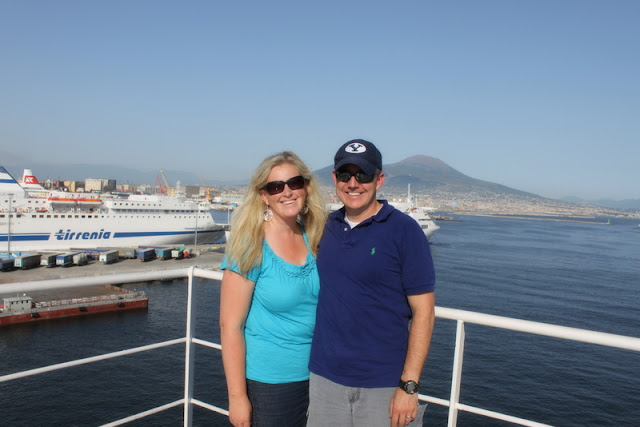 Frank and I on the ferry.
Mt. Vesuvius in the Background
Labels: Italy

Emily said…
Oh my gosh, Sicily! I'm so happy you guys are there! Have fun and make sure you post A LOT about it! ;-)

Angela said…
Lovely blog!!I would love to visit Italy someday. Great portrait! Have fun and thanks for sharing great tips about your trip. I enjoyed reading the previous posts. Anything about Italy I will devour every word! :)
We are planning daughter's wedding which will be in a couple of weeks so I apologize for not being here and to thank you for your visit and comment!
Have fun!!!
July 17, 2012 at 10:18 AM

Angela said…
I meant to say , I apologize for not being here earlier to reciprocate the visit and comment! I am in love with blog already!!
July 17, 2012 at 10:20 AM

Unknown said…
Sicily! How incredible. I love this picture with the mountain in the background. Hope the rest of your traveling is safe!
July 17, 2012 at 10:38 AM

Francesca said…
I told you - 5 terre is very popular with Americans, not sure why! Totally overrated. Unless you do the hike, which is gorgeous. The train Genova to Vernazza takes something like 15 mins, while the drive is a long nightmare (not very dissimilar to what I drive up and down everyday).
July 17, 2012 at 4:52 PM