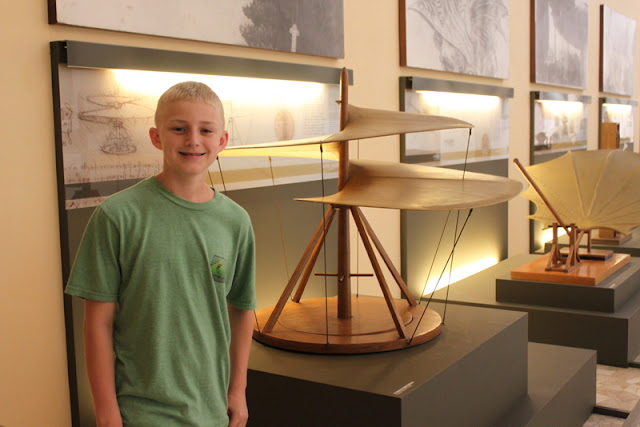 The hardest part of having children of different ages is making sure that everyone is happy.  What might interest Roman  most likely is not going to interest Harris who is 13.  On Thursday, we headed to the Museo Nazionale Della Scienza E Della Techologia Leonardo Da Vinci or as I am calling it the Leonardo Science Museum.  Roman was a little bored because most of it was beyond his comprehension, but Harris was in heaven.  He loved looking at all the replicas of Leonardo's inventions.  If you love science, then you will love this museum.  The museum seems to focus on how art and science collide.  You come to understand really how amazing Leonardo was.  I am pretty sure he must have felt really alone at times because no one understood him or his inventions.  I am sure that most people thought he was crazy.  I can just imagine him waking up in the middle of the night searching for a paper and pen as new ideas came into his head.  He loved music, he painted the Mona Lisa and the Last Supper, he pioneered the way for human anatomy, he studied Botany, and the list goes on.  One of the cool things I learned about him was that after he studied the human heart he came to realized that a man he was studying had hardening of the arteries.  What is also cool is that they have real scientist in the bottom of the museum, who you can talk too, though they must have been out to lunch by the time we got downstairs.  Also if we lived here, I would totally send my boys to one of their science camps.  What is also cool is that the museum is housed in an old monastery.