Today the boys celebrated Martinstag or St. Martin Day at German school though it is officially not until November 11Th. St. Martin was originally a Roman soldier who legend says once gave a part of his coat to a beggar. That night he dreamed a dream that Jesus told him he was a good man and that he should be baptised and be a missionary. In Germany children carry lanterns in a procession going from house to house singing songs, and the most popular song is called I gehe mit meine Laterne in translation the lyrics are My lantern goes with me. Above the stars are twinkling, And twinkling, too, are we. When my light goes out, it's time to go home, rabimmel , rabammel, rabum. The children then knock on doors similar to trick or treating where they then will receive candy or money. Afterwards they meet in the town square around a bonfire. In many homes a traditional meal of Goose is served. Our St. Martin gives the children pretzel bread instead of candy since they receive enough candy during Halloween. 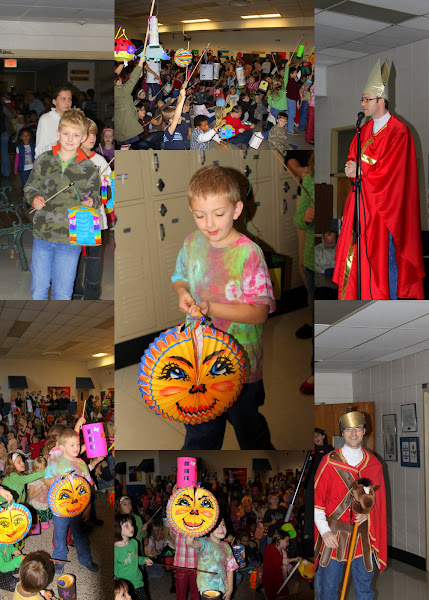