Where were you 20 years ago? I was living in South Africa at the time, but I remember watching CNN and seeing the news that the Berlin Wall was coming down. I cried. Just 2 months before this, I was in Berlin. I remember seeing the guards with their guns sitting on the towers watching the wall. The wall was 27 miles long. I remember seeing crosses of people who tried to cross, but were shot down. We crossed over Check Point Charlie on our way to Russia. I remember being a little scared. 10 years later, I would cross over that point freely with my husband and son Harris. The wall had more significance to me then because my husbands mother came from the part of Germany that was known for those years as East Germany. She fled with her family after the war leaving behind their home and family not knowing when they would be able to see them again. They were smuggled over the border by American GI's. I am grateful she was able to make it over alive. Since the wall came down in 1989, she is now able to visit her family freely. Berlin is a great city with lots to see and to do. Have you been there? I would love to hear your best story of what your were either doing at the time or your best Berlin story. The best story will get sent by me my favorite German candy bar. 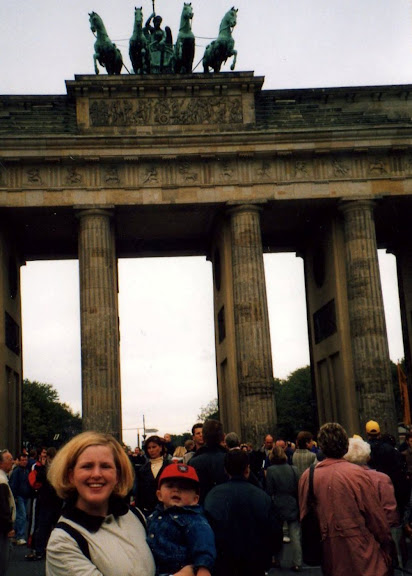 Harris and I at the Brandenburg Gate
Labels: daily life Germany travel

Rocks In The Wash said…
I was in college in Colorado. I remember watching the news in amazement; it was about time!

Em said…
What an amazing story about your mother in law and getting smuggled over. We had a couple in our ward who lived in Berlin when it came down. They said it was an amazing experience. We have been to Berlin and we all but ran down Unter Der Linden, searching for a bathroom for my 4 year old daughter. We also got to cut in line at the Richestag (sp?) because we had children (now thats a good tip). Don't worry I don't expect a German cany bar, I get enought of that.
November 10, 2009 at 9:44 AM

dawn klinge said…
That was interesting to read! I definitely remember that day. I was in school and the secretary made an announcement over the intercom to let us know what was happening. About two years later, I was able to go to Romania.
November 10, 2009 at 10:01 AM

Emily said…
Beautiful story. I still have vivid memories of that day, even though I was only in second grade and I didn't have any particular connection to Germany. Still, I remember my teacher making an announcement in class and we could all tell that this was a big moment...something real and wonderful and profound. I think it was the first time I really understood that the world was wider than my small town in OK--and that the people living out in that big world were just as real and just as valuable as the kids sitting in the classroom with me.

Puna said…
I too remember when the wall came down. I visited East Berlin soon after. What a wonderful memory. Thank you.
November 10, 2009 at 9:32 PM

Unknown said…
That's so cool that you've seen it before and after. We haven't made it up to Berlin yet, but it would be cool to go, so much history. I don't know where I was when the wall came down - in California, a 6 year old kid :). But I did watch the CNN coverage of the 20 year anniversary for hours (well had it on in the house). It was really interesting to hear some of the stories and what it was like...how it all started. I can't believe that wasn't long ago in Europe's history. Germany has come a long way.
November 16, 2009 at 2:32 AM

Di said…
I am way behind - just enjoying reading some of your old posts. The day the wall came down was my 20th birthday and I day I'll not forget....I remember the build up to it all, the hoping that something that a few years earlier had seemed impossible was now becoming a reality - watching people dancing on top of the wall and attacking it with sledge hammers.

I have been to Berlin a couple of times - once for work and once for the Christmas markets....beautiful place to be - but what struck me, even in 2008 was the left over remnants of no-mans land.....but I am glad to see that they are embracing their controversial history.....
August 15, 2010 at 5:47 PM