Hi!  How are you?  Hope your week is going well!  We have a busy week this week.  My husband got home on Saturday and everyone was so thrilled to see him. This week we have 3 school open houses and I am going away with my church group  on Friday to Freibourg.  I am so excited.  Haven't really been away from the children more than a couple of hours since we arrived.  Don't get me wrong, I adore my gang, but I am looking forward to getting to know some of the woman at my church, to see a new city, and to have some time away where I don't have anyone demanding anything from me.  I was going through my photos on my phone and I realized that I had a bunch of miscellaneous photos that I haven't posted.   I will start with our day in Frankfurt.  Only 40 km from where we are living, Frankfurt is the largest city in the state of Hesse and is the home to Goethe, A very busy airport, and is the largest financial district on the continent.  Somethings I have learned about the city since living here is that 1 in 3 of it's inhabitants don't hold a German passport, making the city very diverse. Sadly, much of Frankfurt was destroyed during the war, but if you look you can still find some old world charm.  Often overlooked as a travel destination the city has much to offer as we are discovering.  On our day in Frankfurt, we took a Hop on Hop of Tour with Greyline also known as a double decker bus tour because I wanted to really get a good overview of the city.  We did not choose to get off on any of the stops as I knew we would have many more opportunities to come in and explore the city, so the tour took us a little over an hour.  Afterwards, we did some shopping and headed home.  I can't wait to go back one morning while the children are in school and go to the art museum. 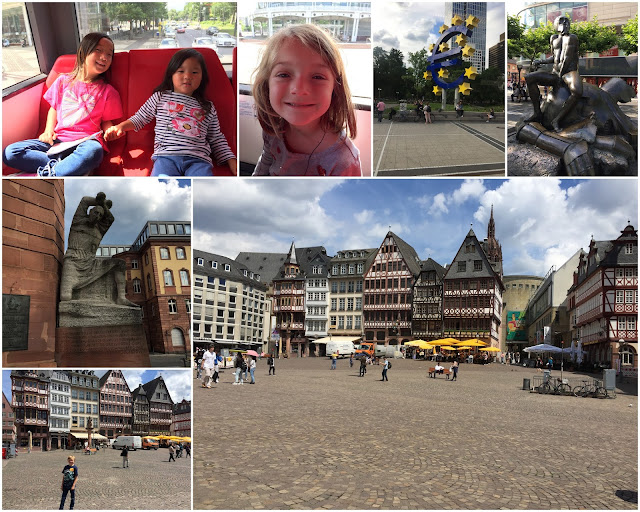 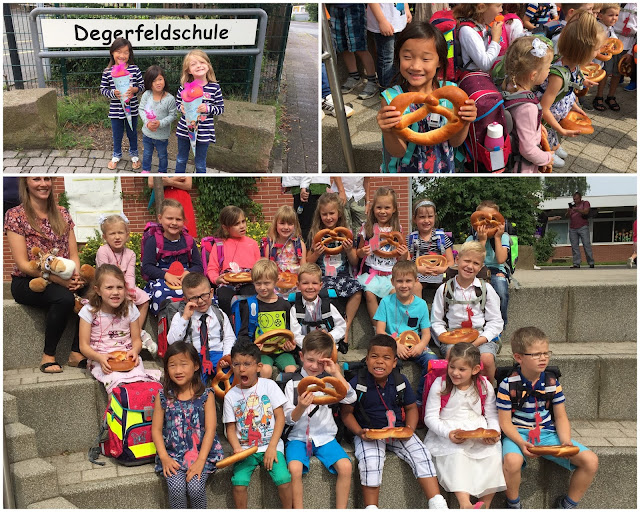 The children started school the middle of last month and it has taken us about that long to figure out the  school schedule and figure out a good system for getting our homework done.  We choose not to put the children in an international school because we really wanted them to learn the language and would have also required a long commute each day.  The Children start school here between 7:40 and 8:10 depends on the day and end around 12:10 though Roman stays after 3 days a week for Clubs. He gets the opportunity to do his homework at school, eat lunch and then he participates in theater, breakdancing, and floorball. Avery had the hardest transition as she was entering real school for the first time "Kindergarten." and while she had some vocabulary her German was limited.  She is loving it now and comes home each day with new words for phrases.  She loves to say."Das tut mir leid."  It means I am sorry, but she thinks it is funny.  Ivy also took a week to transition into school, but is happy to say good bye to us at the door now which I am so grateful. 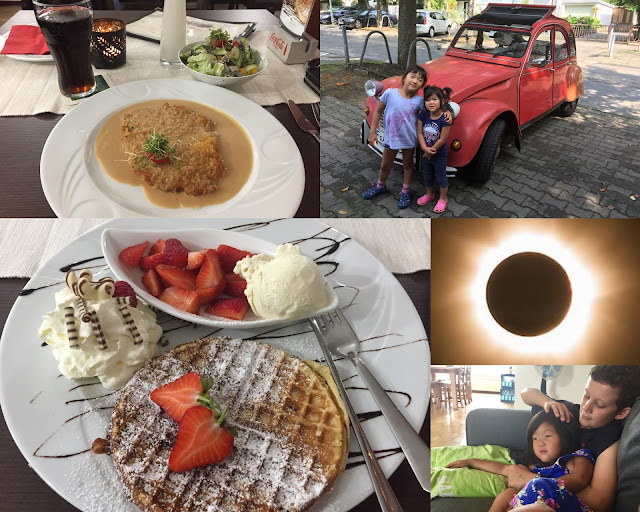 Did you see the eclipse in person or on TV? While it wasn't really a big event here in Germany. We were able to watch it live through the BBC. My two older boys went with their Nana to South Carolina and thought it was pretty spectacular. They are all ready planning for the next one which I think is in 2024. One afternoon a couple of weeks ago, I was suppose to go to a BBQ at the church, but due to heavy rains it was canceled; however, since I had already hired a babysitter for the evening I ran some errands and went to dinner hence the Schnitzel in a cream sauce and waffles with strawberries for dessert. The car photo has really no significance but I thought it was cute. Does anyone know the name of this type of car? Also, the children's cousin came to visit for a week. They had so much fun playing with him.  Ivy just adores him. Well, I better go! I have Goulash on the stove and my children should be home from school in a few moments.
Labels: Germany

Andrew said…
I believe the car is a Deux Chevaux, aka a Citroën 2CV. They are an interesting car, certainly. Greyline must have the world covered now with its Hop on Hop off Buses. They are a great way to get an understanding of a city. We've used them in London, New York, Lisbon, Porto and Barcelona.
September 5, 2017 at 7:18 AM

Seraphinas Phantasie said…
Wonderful impressions of your visit in Frankfurt and the children seem to be happy.
Best, Synnöve
September 6, 2017 at 8:27 AM

eileeninmd said…
Hello, love the views and scenes from Frankfurt. The school children photo is great, cute smiling faces. Have a great day!
September 6, 2017 at 9:02 AM

Phil Slade said…
Frankfurt looks a lovely city. Your collages are very colourful. Such a good idea to send your children to local rather than international ones.
September 6, 2017 at 4:15 PM

NatureFootstep said…
nice shots of Frankfurt. Loved the images from the school :)
September 7, 2017 at 2:27 AM