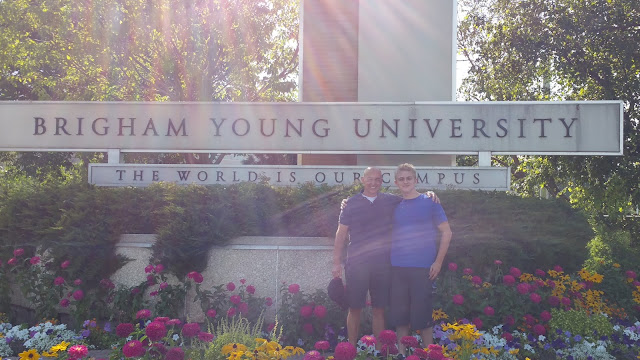 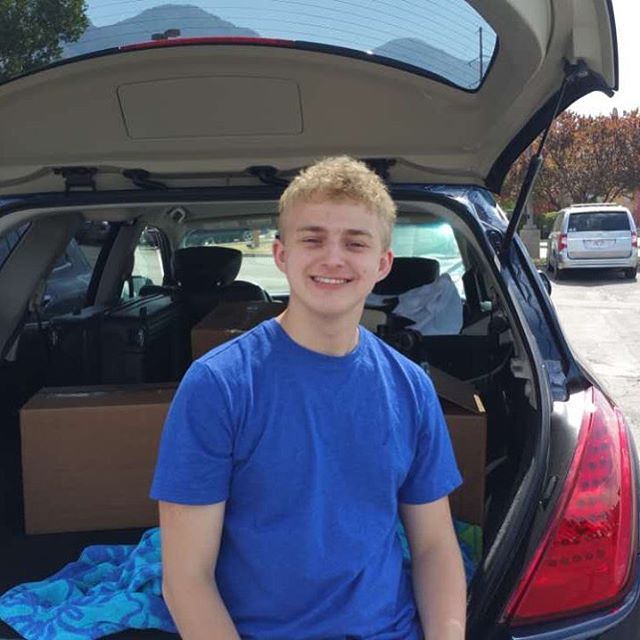 And  Just like that they leave home and head off to college.  Doesn't every mother say,"I can't believe their all grown?"  We remember the minute they were born as like it was yesterday. I remember how just before 7 a.m  my husband tucking me into our Nissan Sentra and driving off to the University Hospital as my friend Jennifer waved goodbye. She took a picture of us. She was so excited for us, and my stomach was in knots as I was so nervous. There was a slight chill in the air. I was wearing a coat, but I didn't really need it. I don't think I have ever asked my husband if he was just as nervous as I was, but by looking at him you wouldn't have known.  He seemed as cool as a cucumber.  We arrived at the hospital and the nurses checked me into our room.  I had a lovely view of the Football Stadium and the University Campus. The trees were just starting to bud with pink and white blossoms.  Cars were coming and going all awhile on the monitor in a continuous beep of our sons heart beat flashed. Periodically, the doctor or nurse would come in and check on my progress.  It went slow.  He was going to stay in there as long as possible.  He was in no hurry!  Around the middle of the night the pain increased and I was going to need an epidural, but the anesthesiologist was with another mother.  I thought I was going to throw up the pain was so intense. I wished for dealth. Ones head is not rational when your in that much pain.  I didn't know how I was going to survive. After waiting the longest 90 minutes of my life, the doctor came and he was my new best friend.  A wave washed over me and I felt my body relax the pain was gone.  My legs felt like bricks and not feeling oneself breath is the strangest feeling. I had to keep looking at the monitor to make sure I was breathing.  The nurse gave me some oxygen as my levels had dipped I was starting to get a fever. Earlier that morning they had broke my waters.  I tried to sleep, but I couldn't. Morning came and the doctor expressed her concern again that we might have to do a c-section. Eventually, I reached a 10 and I felt the urge to push but his head was turned the wrong way. They tried to turn him, but he wouldn't turn. 2 hours into pushing they begin talking again about c-section as they were afraid maybe his head was too big; however, first she wanted to try using the forceps  They tried wrapping the spoons around his head, but had no success and so they switched to the vacuum to see if that would work.  It did, but not without leaving poor Harris all banged up.  I remember looking out the window when he came out.  It had been cloudy and grey all morning mixed with the typical Seattle drizzle, but when he came out the sun came out. Birth is such an amazing miracle!  The nurses took him away to clean him up and Frank went over to the bassinet to watch while the doctor stitched me up. Frank brought him over dressed in his new pajamas from the gap with it's matching hat. " Hello little one," I said as I studied his face.  He looked like his father with dimples in his cheeks and chin though the one in his chin is now gone.  Then I sang I am a child of God.  I was a mother.  It all seemed unreal and after all the doctors and nurses left we just marveled at what we had made.  One would think that all one would want to do after being up all day and all night is to sleep, but I wasn't tired.  It took a while before the high wore off and we settled into the bed. We ended up staying three days in the hospital as he had a hard time regulating his body temperature. Then like that they let us take him home.  No instruction manual and we were scared to death.  I had watched children for years, as I had worked as a Nannie, but I was never solely responsible for one. The first weeks and months were a blur as he was colicky he would only sleep if he was laying on top of my chess. Poor guy!  Somehow we all survived and look at him.  He is at college!  He started two weeks ago! He is having a blast! He is making new friends and loving his classes.  The other day we got a letter from his saying his chemistry class it is his favorite.  A friend of his is teaching him how to play a game called go and this weekend he will go on his first trip alone to San Francisco to attend a conference.  I am secretly terrified while at the same time excited for him to see the Bay Area.  Spread your wings darling boy! My baby you will always be! We are so proud of you!
Labels: Harris

Buckeroomama said…
Congratulations! Wow. I still have a few more years before we face this.
September 12, 2017 at 10:57 PM

Seraphinas Phantasie said…
Congratulations ! You can be proud of your son and of all your children.
Best regards, Synnöve
September 13, 2017 at 5:27 AM

Anonymous said…
In a blink of an eye our children grow up. All to fast. That said, it is wonderful to see them succeed. Really nothing better. As their success seems like our success. You must be very, very proud. All the best, Susan
September 13, 2017 at 9:20 PM

Reema said…
Congratulations! It is great post and different also. Great success, Thanks.
overnight taj mahal tour
September 14, 2017 at 7:07 AM

Alicia said…
They do grow up too fast don't they. It doesn't seem so at the time, when they are toddlers and getting into everything and then they start school and you're exhausted from helping them with schoolwork and driving them back and forth to school activities. Then they get into the teenage years where you still want to baby them, but they think they are all grown up and you just want to tell them "oh my love, you are still so naive" and then they go off to college and even though you gave them wings, you hate that those wings take them so far away. Oh darn, now I'm going to start crying too! Congratulations to you and good luck to your baby boy :)
September 14, 2017 at 1:28 PM

Sallie (FullTime-Life) said…
Congratulations to your son! People talk about 'empty nest syndrome' when all the kids have grown up and moved out, but I remember that it was harder when the oldest left home ... it changes the whole ' family as we thought of it' ... by the time we were child-free, I had adjusted and was ready for the next chapter in life!
September 14, 2017 at 5:06 PM