Another One or Two Bite the Dust 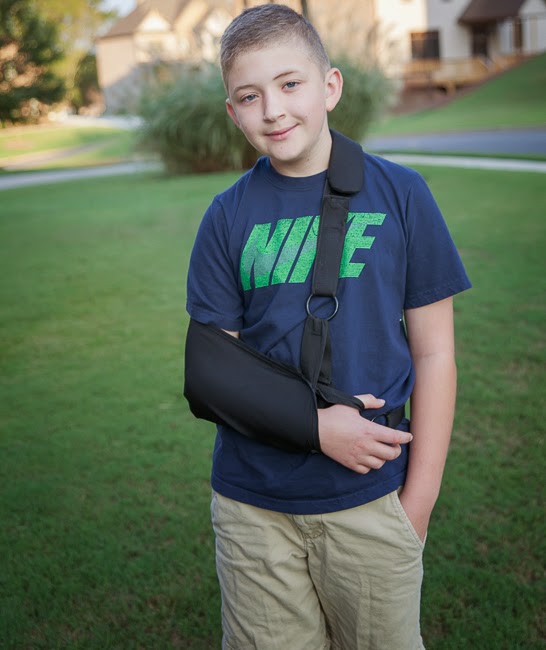 Yep, you are seeing right.  Winston broke his arm.  He was playing soccer and fell on the wet grass as it had been raining prior to our going.  It looks like he will be sporting that sling for 3 weeks until his clavicle has healed.  While I was in there I ask the doctor what he thought I should do in-regards to my wrist.  Let's back up a week, I was standing in the drive-way and Addy rode right between my legs causing them to buckle and my wrist to hit the ground.
Another one or two bite the dust.  Yep, it is another broken bone!  This time Winston has broken his clavicle.  He was playing soccer and 30 minute on the field he fell; however,  it wasn't until the next morning when it told us he thought he should go to the doctor.  He said he was in a lot of pain.  While the pediatrician wan't positive what was going on, he sent us to the orthopedic doctor to get it checked out!  They did an x-ray and sure enough it was broken.  Now let's back up a week prior.  I was standing in the yard talking to one of my son's friends mom and Addy rode right in between my legs causing them to buckle.  It was all I could do to catch myself.  My wrist did all the dirty work.  It has been throbing ever since, but I didn't have time to go to the ER.  I asked Winston's doctor what he thought I should do and he was kind enough to x-ray it too.  Not broken, but very badly sprained.  I am notk is g footing my own wrist brace.  3 weeks and he can resume his life as a soccer player and two week for me!  The weekend is coming up?  What do you t
Labels: Winston

tinajo said…
Oh goodness - kids I tell ya! :-) I hope he recover fast, it´s so limiting to have your arm like that. Thanks for saying hello at Instagram by the way - I had troubles answering you there due to phone problems. I´ve actually made a post today, the first one in like forever! :-D