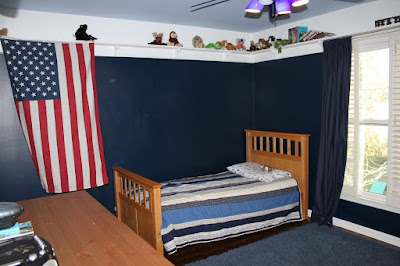 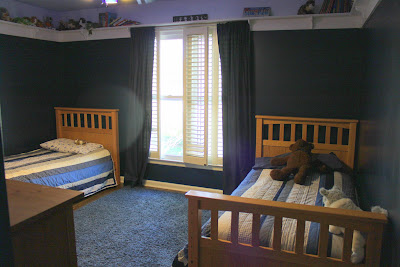 Hi! Did you have a good weekend? We did! Germany won it's first game 4-0 against Australia in the World Cup. Yeah! Spent some time thinking about going to the beach until we saw reports of the oil washing up on the gulf. Ugh! It is such a shame because these beaches are the most beautiful in the world. The sand is white powder and is super soft. We like to go to Orange Beach in Alabama because it is not as touristy as Destin, Florida. Anyway, I had remembered that I had taken these pictures of the big boys bedroom. Dreamland, where the big boys lay their heads each night, and dream of what they want to be when they grow up. Since their dad works a lot this is where he spends the most time with them. Each night he brushes their teeth and puts them to bed. He wrestles with them or for some reason they call it roach. ? I don't know why they call it that, but they have all kinds of varieties such as rodeo roach which is where the boys get on their dad's back and he tries to buck them off like a bull. Officially, dad is out of commission until Roman starts asking for them because the other two are to big now. They also play this game they made up with cars called tournament where they have to shoot a car into an empty shoe. Sometimes he reads to them, but mostly that is my job. Winston loves to listten to church music as he falls asleep and Harris likes to listen to Marvi Hammer which is National Geographic for children in German. Now if I could just train them to sleep longer than 6:30 a.m. each morning.
Labels: daily life

Jenna said…
I love the huge flag in the boy's room. Your new header picture is beautiful.

Crazy Campbells said…
I love the sweet moments Dads spend with their kids. I know that those are momories I will cherish forever so I always have hopes my kids will do the same. The boys rooms look good! I am still trying to pull rooms together and can't wait to own a house so I can paint someday.
June 15, 2010 at 11:20 AM