When it rains it pours 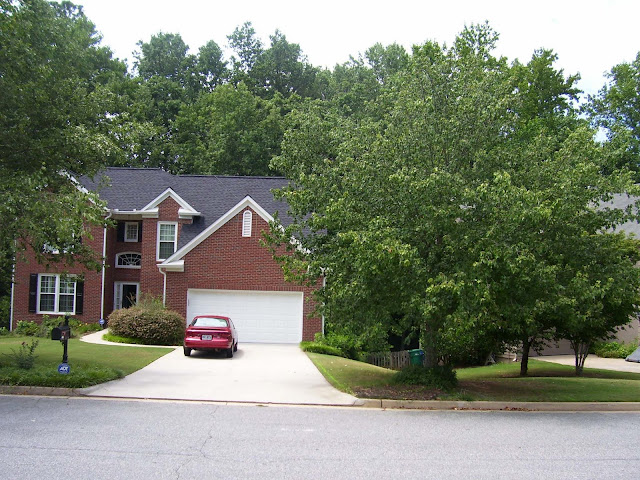 The tree on the right was the culprit. 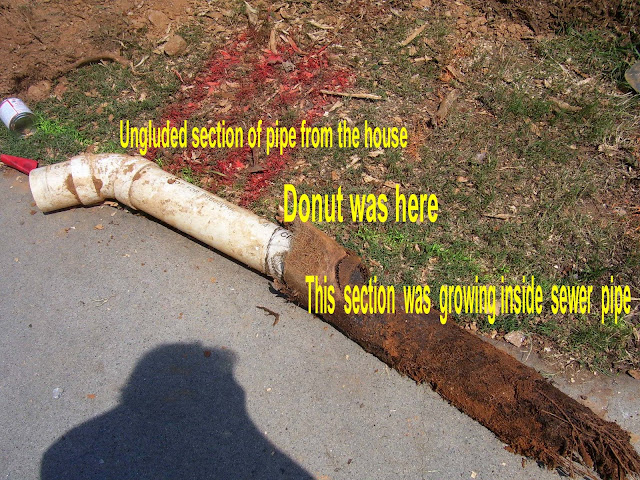 This summer we got an e-mail from my mother, who was living at our house, that stated our basement had flooded. It wasn't due to rain, but due to the roots from the maple tree in the front yard growing into the pipes. I guess the guys who laid the pipes did not glue them together properly, and the water leaked causing the roots to grow. Boy did they grow! Anyway, $5,000 later we had pipes that were fixed and one less tree. Unfortunately, they could not save the tree because even with the pipe fixed there were chances that over time it would do the same thing. Almost broke my heart. I loved that tree. A month ago, our dishwasher started making noises. I called the repairman and he could not find the cause of the noise. In fact, the noise mysteriously disappeared the minute the repair guy came. On Wednesday afternoon the middle of a load my washer machine stopped working, so once again I called the repair guy. A washer machine is one thing I can't live without. Since our dryer hadn't been drying very effectively, I asked the repair guy to take a look at that too. Well, it turned out that the motor was burnt out on the washer and the dryer wasn't venting properly due to a kinked hose and lint built up in the duct and machine itself. Ugh! Then about 2 months ago, Roman stuck something in the downstairs toilet clogging it up. We tried everything to ajar whatever was stuck, but no luck. Winston did this 4 years ago and we ended up replacing the toilet because the item was stuck in the neck of the toilet. We were not going to fix this toilet because why would we if it is just going to happen again. However, it seems the shower is on the same line and it overflows when used. That means any guest we have would have to come and use ours. No thanks! Now I have to call the plumber again. Why does it seem like everything goes wrong at the same time.
Labels: daily life

Jamie said…
Our neighbours diagonal to us had their tree grow into their sewer pipe. While they were digging, the company hit some electic wires. 6 feet down and not in the place that the marking company had marked. Luckily we were without power only an hour and a half, but the poor electric company guys were out there until who knows when on New Year's Eve (when it got really really cold).
January 31, 2009 at 3:36 PM

Jonesy Rae Photography said…
I know all about those dryer problems. We've had our repair guy out now 11 times for our dryer. I think they finally got it. Glad that one was under warrenty! And no, that's one that is really really difficult to do without.
January 31, 2009 at 9:22 PM

Company EIGHT said…
I'm so sorry Kelleyn! Hopefully the raining is over at your house, and you can move on to some sun!!
February 1, 2009 at 8:28 AM

Audra said…
Did you get a mold inspection after the flooding? If not, you should! I can refer you to someone if you are interested.

Also, I have finished the blankets! I took them to church today and forgot to give them to you. They are done though!
February 1, 2009 at 9:14 PM

Mel-o-drama said…
Aarrggghhh, I hate money out for stuff that's not even fun. We have had a washing machine repair man out 4 times for our washing machine, no one can figure out what's wrong with it, but it's so new and works frequently enough we don't want to replace it.
February 2, 2009 at 8:28 AM

thepetersonfive said…
Hang in there Kelleyn. I feel your pain. We had a few major expences this year allready. Eventually we do get a break.
February 4, 2009 at 2:16 PM