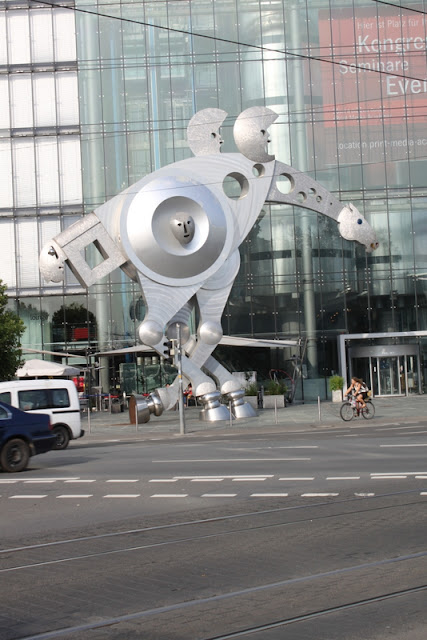 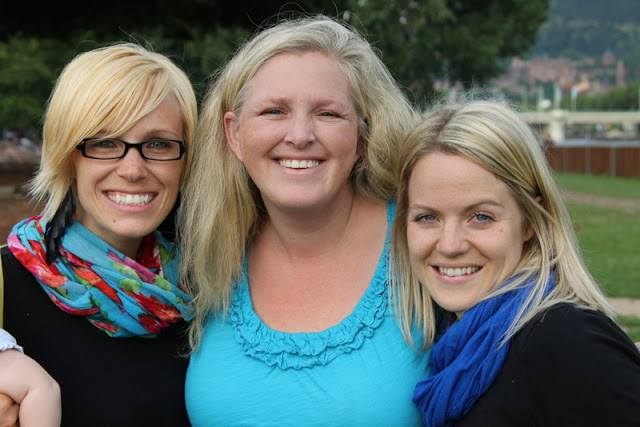 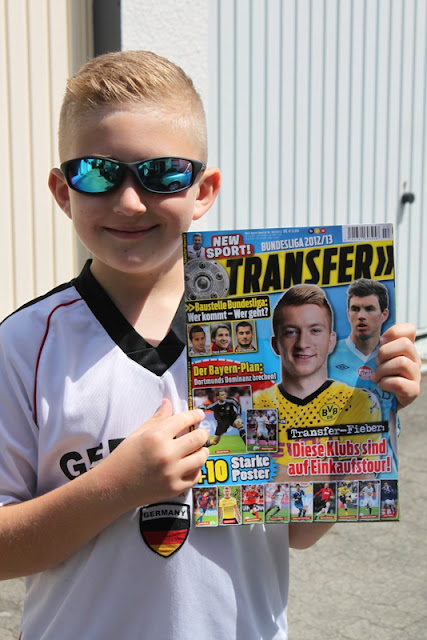 Not far from the train stain here in Heidelberg you will see this large statue of a horse.  Love it!  Can't believe we have been here for two months and we only haveonly three weeks before we are back in the states.  Tomorrow we will leave for Bern, Switzerland where I will see a good friend from my high school years and his wife.  He was a exchange student in the states.  We have kept in contact all these years.  We have visited him and his wife multiple times over the years.  One might think it would be akward for my husband, but he enjoys getting together with them as much as I do.

This week my husband and  I were treated to a very yummy picnic along the river by these two amazing woman and their families.  They are the best!  Thanks!

Sadly, Germany lost against Italy.  Boo hoo!  We had one sad ten year old on our hands.  He was really hoping they would win.  Then Italians celebrated way after midnight.  It was slightly annoying.  The loss didn't stop Winston from getting his hair cut like Marco Reus.  He went to his Oma and Opa's house today where he will spend the next three weeks.  He is on cloud 9.  When he went to the soccer field today a man told him he looked like Marco Reus.   Winston beamed from ear to ear according to the report his Oma gave us.

Tonight I witnessed the weirdest art peformance.  Actually, it has been going on all week.  A group of performers have been running around town all week.  They dress in bright colored sweat clothes and at the drop of a hat they contort themselves into weird shapes and stay in the position for a few minutes.  Tonight  4  of them were on top of the telephone booth stacked on top of each other.  However, tonight they were followed by a crowed of people who clapped and took pictures.  The other day when we were at the park we saw a group of guys seperated into two teams playing this game that looked like something in medival times.  They ran after each other and then hit each other with these sword like pieces only larger and then some of them would drop to the ground and freeze.  We also witnessed a colony of wild paraqeets in the trees by the river.  At first I didn't believe my eyes when Roman pointed them out to me because how could they be living along the river.  He thought they were parrots. There is no shortage of entertainment here in Heidelberg.  My life is going to seem pretty boring when I get back to the states after living here the last two months.
Auf Weidersehen Heidelberg!
Labels: Germany

Formerly known as Frau said…
I can't believe it's been two months already....but wow the times you've had and the places you've been. Memories to last a life time. Have a wonderful weekend!
June 30, 2012 at 8:34 AM

sistatee said…
Kelleyn, I was so glad to meet you in Heidelberg. Thanks again for the wonderful time and the delicious pasta. Tamera Taylor
July 1, 2012 at 12:17 AM

Arctic Mum said…
Enjoy the last weeks in Switzerland! Would love some updates from there as well!
July 1, 2012 at 3:44 AM

Francesca said…
We're probably going to be the only Italian family not watching the game tonight - what can I say? it hasn't even started, and I'm already so tired of it, and of all the endless discussions about super mega screens that people demand their councils instal in the central squares. I can think of a million better ways of spending public money. I know, I know, I'm no fun (not when it comes to soccer anyhow!). Happy travels!
July 1, 2012 at 9:14 AM

Emily said…
This post is absolutely crammed with life! I love hearing about your adventures!