Earlier in the summer, I had bought a season pass to the Atlanta Aquarium; however, because I forgot my camera in my excitement to go I didn't get any pictures of that trip. The Aquarium is kind of pricey, but if you buy the season pass and plan to go a couple times throughout the year then it is not so bad. Another thing I have learned is that Fridays are jammed packed as opposed to Mondays. You can see it all in one day, but it is nicer if you can just focus on one or two rooms and allow the children to play. The movie is cute and apart of the season pass, but I don't think I would pay for it additionally. Get there early because this will give you the best opportunity to view the tanks without the crowds. This Friday, we went to see the Titanic Exhibit which was not included in the pass, but was offered at a reduced cost. I think I would have loved it if I had been allowed to push Roman through in his stroller. He had no interest in seeing artifacts from a ship that sunk almost a hundred years ago. I didn't really have a chance to look at everything in great detail. He did enjoy touching the iceberg. I am glad that I went though. 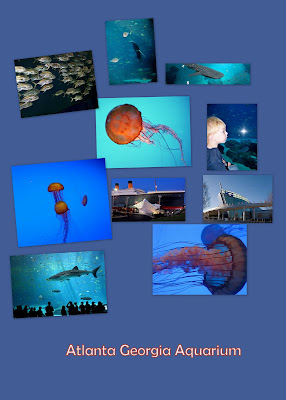 shayndel said…
Thanks for taking us through with you.
I feel like I had a chance to visit too, through your description!
I'm still staring at the gorgeous blues on the poster.
August 31, 2009 at 5:58 AM

jane said…
hey you! sounds like you had a nice time. i can only go into aquariums if i´m sure the fish are going to stay on their side of the glass. i like them in pictures though. the jelly fish are amazing! thanks for all your fun comments! i´m sending you a big hug!-jane
August 31, 2009 at 11:06 AM