It is just beginning to feel like fall here in Georgia as the temperatures are cooler today, but I suspect it will be a few more weeks before the leaves begin to change colors. I don't know about you, but as soon as September rolls around I begin craving roast, apple sauce, and pumpkin and when I mean pumpkin I mean anything made with pumpkin in it! I don't know if there is any where in the world that has such a love affair with pumpkin as we Americans have. When I first heard about these cookies, I wasn't so sold on the idea. I mean pumpkin and chocolate chips? I reluctantly reached out my hand to the plate that was offering them and gave them a try. They were delicious! I think they have to be healthier too since they don't use as much butter and sugar as a traditional chocolate chip cookie. Now I just need to convince my children to give them a try when they get home from school. 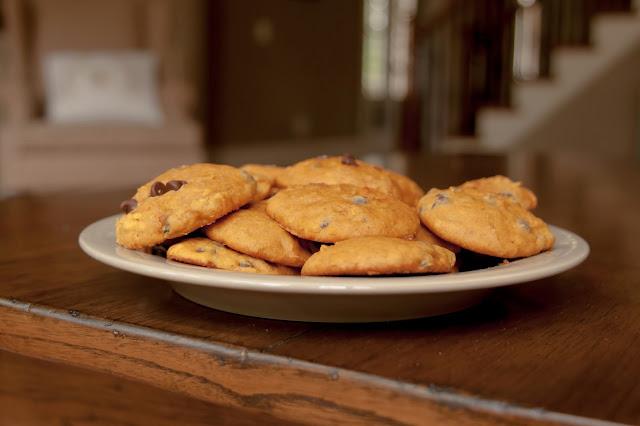 In a bowl, combine butter and sugar than add the pumpkin, egg, and vanilla.  In a separate bowl shift flour, cinnamon, cloves, nutmeg, and baking soda together than combine.  Add chocolate chips.  With a ice cream scoop out ball of dough until a cookie sheet and with the back end of the scoop slightly flatten the dough  just a little bit.  Preheat oven to 300 degrees and bake until golden brown or firm about 10 minutes.  Allow to slightly cool before removing from pan as these are really soft cookies.
Labels: recipe