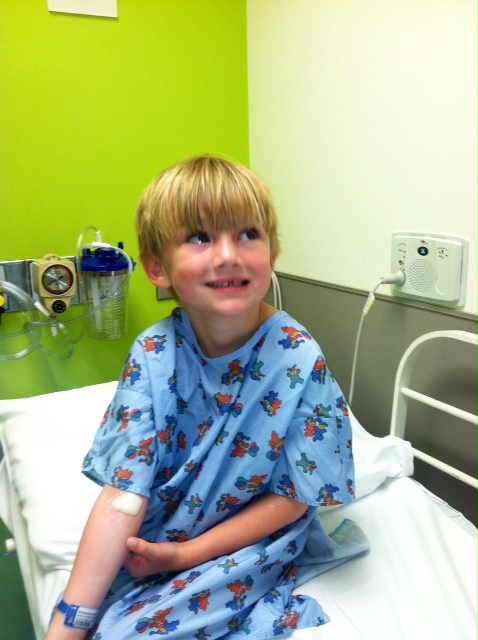 First before I have you worried, this is a picture of Roman getting ready for his MRI. He did fantastic!  I was amazed at how fast the sleep medicine worked. I am not kidding he was asleep like in two seconds. He didn't have a chance and 45 minutes later the nurses wheeled him back into the room and just about as quick as he went to sleep he woke up. They were super impressed because I guess it can take some children a while to wake up, but not Roman. He was ready to go home!  When we went to the cardiologist 6 weeks ago they noticed that Roman's right ventricle had dilated by a centimeter. Now a centimeter doesn't sound like much, but after 5 years of no change, they wanted to make sure nothing is going on.  Eventually, he will need a pulmonary valve replacement, but we are praying that will be much later down the road.  As I have explained before, but to those of you who are new around here he will need a replacement. We are hoping that he doesn't need one before he is 17-18 because then he can have an artificial valve. If he has to have one now, then they have to use a valve from a cow or a pig and they do not grow. This means he may or may not need another replacement down the road.  While these surgeries are pretty routine, the more you muck around with the heart the more likely he will have a chance to build up anti-bodies and need assistance from say a pacemaker.  We don't want this!  We do know something is going on because he has been more tired than usual though you wouldn't have known that tonight when it was all I could do to get him to go to sleep. We should know the results by the  end of next week.

Anyways, it has been a crazy week.  It seems like I am on the bus from the movie Speed.  I can't believe 3 weeks of summer vacation are over.  We arrived home last Thursday night, and on Friday I went to see the movie Now You See Me .  It was fantastic!  I love when you are hanging on to the edge of your seat till the very last minute.  Later that evening, Frank and I went to a birthday party/tenure party for a good friend of ours who got tenure as a professor.  It was the Party!  A little after midnight, Harris rolled in the door from camp.  He had a great time!  On Monday, I went to see The Great Gatsby with my friend Lucy.  The movie was total eye candy.  Stunning!  Roman had his MRI.  Harris left for a religious retreat called the Pioneer Trek.  He returns home on Friday afternoon.  Roman had two play dates this week!  Winston had two play dates this week.  Winston is going to Six Flags today.  I need to pack his suitcase!  I am also in charge of the Fourth of July pancake breakfast at our church, so I need to get busy organizing that.  Are you exhausted because I sure am!
Labels: Roman

Hope you get positive news from the MRI.

Dianne said…
Please keep us informed, wishing/praying for the best for your sweet boy! Your summer sounds like mine, where is the R & R? Fun times though!
June 14, 2013 at 12:17 PM

Anonymous said…
I´ll cross my fingers that everything is OK - take care! :-)

Formerly known as Frau said…
Hoping and praying all goes well with Roman and he can wait for a replacement. My heart goes out to you as a Mom I'm sure you are on pin and needles. Hang in there....I'm exhausted after your week! Have a great weekend and happy father's day to your hubby!
June 14, 2013 at 6:33 PM

Unknown said…
Sounds exhausting, for sure!