Invasion of Star Wars and the Ground Won 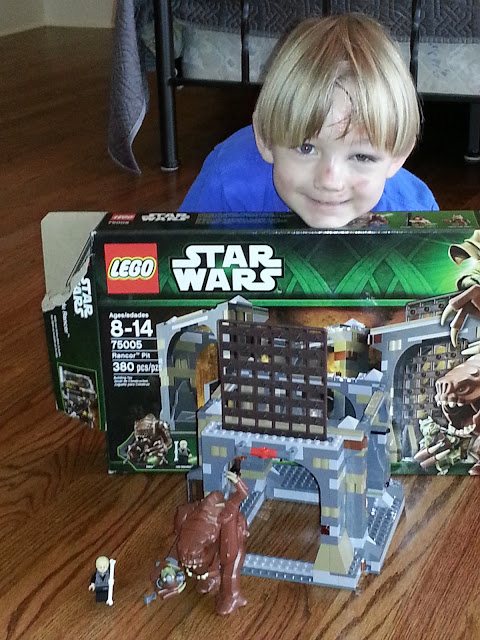 You can't tell by this photo, but Roman's eye on the right is all black and blue.
He also has a big old goose egg under those bangs.

March started off with a bang as we spent Friday night in the ER.  Roman fell at school as he was just about to get on the bus.  I guess another child stepped on the heal of Romans shoe and he fell forwards.  He was holding his backpack, so he didn't have his arms to use to break the fall. He hit his head on the ground pretty good.  He got a good goose egg, scratches on  his forhead and nose, his eye is completely black and blue and it is also swollen to the point he can almost not see out of it.  He was acting funny, so I felt we better go to the ER just to make sure it wasn't something more serious.  He has a mild concusion.  Poor kid!   His papa felt so bad for him that he bought him a large Lego Star Wars set.  Roman is totally into Star Wars these days.

We celebrated Harris birthday by ordering Chinese from a new restaurant down the street and I made him and ice cream cake.  He will go to the movies with his friends this up coming weekend.

Currently, I am reading a book called Chinese Cinderella.  At first I thought the book had some connection to adoption, but it is about a woman who is growing up in China during the 40's.  I am loving it!

Last week I went to see the movie Safe Haven, it was so good.  It was worth the wait!

Winston and I went on a one on one date this past week.  We went to see Escape From Planet Earth.  It was so cute and funny.

As if loosing my husbands passport and Roman's injury wasn't enough, I blew the front wheel tire out as I turned to hand something to Addy who was sqawking in the backseat.  Since bad things happen in threes, I am hoping that is it for a while.
Counting down the days till our paperwork heads to China.  They should be done translating our paperwork either Friday or Early next week.  Can't wait for the call to say they have a child for us!


Well, I hope your weekend was a lot quieter than ours.  Happy Sunday!

Di said…
Oh dear - it does seem that you have had your share of misfortune...hopefully it is over.

The Star Wars lego looks amazing. My family (well my brother) has the most amazing collection of Lego. If your mum gives it to you for your birthday and your Christmas every year (and you are 45) you are bound to have created a large collection!

Everything Beautiful Shay said…
Bless you all... what a tough week. Praying this one is full of blessings and happiness! XOXO
March 3, 2013 at 9:37 PM

Shauna said…
Yikes, bummer for the face. But, at least no stitches and the like. We love legos and Star Wars here too, for sure.

I need to get out from under the rock I'm living in because I've never heard of the movies you are referring to...for Pete's Sake.

Sorry about the tire. THat is the pits when stuff like that happens, you must be right about threes. So now you should be free sailin'. :) LOve to you and happy week,

dawn said…
Oh my word! Hoping Romans eye and head feel better ASAP. Sheesh, nothing like giving a mama a heart attack!
March 4, 2013 at 6:21 AM

marie said…
Yes, hopefully no more trouble around your parts :)

I am sure I will drag Glenn to see that movie as soon as it goes to the cheap theater, I've heard it's really good.

Unknown said…
I got a flat tire this week too. But no trips to the ER. Although my boys would have probably thought it would be worth it for a Lego Star Wars set. ;)
March 4, 2013 at 6:30 PM

Buckeroomama said…
Oh, I hope your boy is feeling all better now. *hugs*

I read that book, too. Couldn't believe how badly treated she was. I got to meet the author when she was here and got her to sign my copy. :)

Unknown said…
Sounds like you've had a lot of ups and downs this week! I hope Roman's feeling better. And -- fingers crossed for good news from China!
March 6, 2013 at 8:40 PM