I have learned my lesson that if you allow your children to use your computer than you will for sure get a virus that will invade all your files. I have learned that if you do not backup your files or burn your photos to disk right away that you are bound to loose photos. This past weekend one of the children opened some file that infected my computer and while I was able to get some of my photo files published to an on-line site, I lost some photos. Ugh! Let's just say I have shed a few tears this week. The only good thing that has come out of it is that I have cleaned out many of the closets and will be donating the clothes to the victims of the recent Earthquake in Chile. 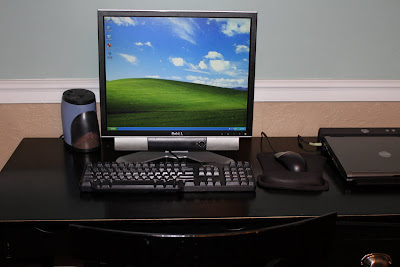 Bad news is that our water pipe outside has been broken since October and we didn't know it until we got the water bill and wondered why it was so high. The good news is that it isn't going to cost as much as we thought to repair it, and they aren't going to have to dig up much of our yard to repair it. A shout out goes to my wonderful husband who is fantastic at saving for rainy days like these or broken pipes, and for his sweetness for researching computers for me so that I will not have to share with my children.

Good news is that I have lost 17 pounds in the last 8 weeks through careful eating and exercise. Bad news after a frustrating evening with my 11 year old, I binged on the Easter Candy. I should have known better not to buy it until the day before. It did taste wonderful and I was on a sugar high for a couple of hours. I did instantly feel guilty and began calculating how many minutes I am going to need on the treadmill in order to burn it off.

This week I did not earn the mother of the year award when I lost my temper with my 11 year old over his grades. He told me I was a mean mother and that he felt like he lived in hell. Given he was a straight A student all his life -I don't get it. It is like he has senoritas ( a term given to American 12th graders who slack off the last semester of high school.) What upset me more was his excuse for getting the F's on his school work. One assignment he kept losing and he doesn't know why. The other he explained that the teacher never asked for the assignment, but at the beginning of the year he was told it was his responsibility to turn in the work on his own. The last assignment he explained he had to rush doing because he lost his work from the previous day. He explained that he put it in his desk, but it must have fallen out and the janitors threw it away. I might take up drinking if this is just the beginning of all the fun with pre-teens and teenagers. I wasn't this bad. Not perfect, but I was a rather responsible child.

I was excited on Monday when it was 70 degrees outside and the trees began blooming, but have been in a crummy mood the past two days as the rain has poured just about non-stop.

Last but not least look for my new post on past adventures. I will be giving you the 411 on places to visit and see around the world.

Nadja said…
Congratulations for losing so much weight! That's awesome. I'm also trying to lose weight again after being so undisciplined during the last few weeks.
Hope you have nice weather on the weekend. Good luck for you and Harris...
March 12, 2010 at 2:19 PM

Jamie said…
Caleb keeps getting F's for not turning in class work. How that doesn't get turned in, and the teachers who know it's a problem don't ask for it straight from him, I don't know.
March 27, 2010 at 10:05 PM