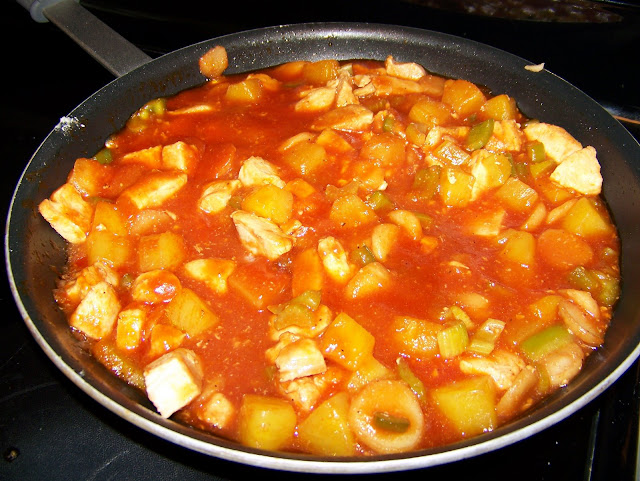 The last couple of years, I have bought Sweet and Sour Sauce out of a jar and you just dump it over your chicken. The only problem with that was that was the stuff is this neon red gelatinous goop and the children wouldn't touch it because it was too spicy. I had tried a couple of recipes but was never really too happy with them. One recipe called for a bottle of Russian dressing, but it was always too watery. Then I came across a recipe in a cookbook called The Best of the Best from Michigan. I bought the book years ago when we lived in Michigan. The recipe is actually titled Hawaiian Chicken, but it is Sweet and Sour to me.

Ingredients
1 20ounce can of chunk pineapple
1 medium onion diced
1/2 cup celery diced
1 medium green pepper diced
1/2 teaspoon salt
1/4 teaspoon pepper
2 Tablespoon cornstarch
3 Tablespoon soy sauce-I used a 1/4 cup
3 medium to large size chicken breast cubed
1 Tablespoon olive oil
1 cup Ketchup
In a saute pan cook chicken in olive oil until almost cooked through. Take chicken out of the pan and put on a plate until later. On medium high heat saute onions, pepper, celery until almost soft or until onion is translucent. Then add pineapple, salt, pepper, soy sauce, and Ketchup. Stir in cornstarch then add chicken and bring to soft boil. Serve over rice. Cook time about 20 minutes. Plates were licked clean. If you like your sweet and sour a little spicy you can add a few pepper flakes. Don't want to cook the chicken or like your breaded bake chicken nuggets in the oven and add to sauce.
Labels: recipe

Em said…
This looks like a really good recipe, I will have to try it. We did do MSC, I think they have various cruise option, even one in the Baltic Sea, now that would be fun. You would love Turkey, just stay away from the salesmen :)
July 13, 2009 at 2:05 PM

Audra said…
Thanks, I'm going to try this!

Unknown said…
Wow these look so yummy! My mouth is watering just looking at your photos.