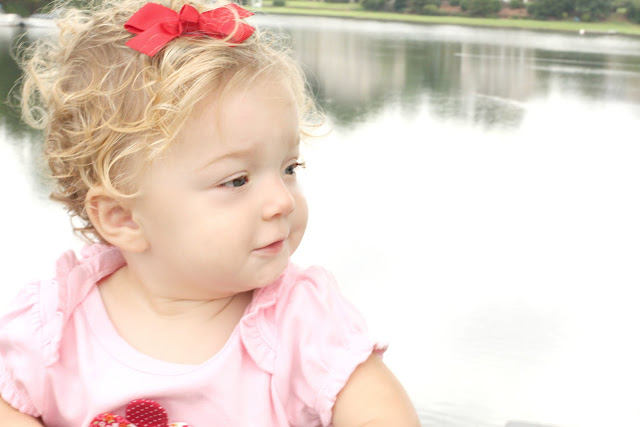 I can't believe my baby is 14 months and in a couple weeks 15 months.  Time is really going by too fast except at night when I wish she would sleep through the night and not wake her very sleep deprived mommy up two to three times a night. Doesn't she know I need sleep.  So maybe all of you (my friends) can say a prayer that she will learn to sleep.  I am so tired that I can barely think.

Addy has two new teeth.  Two on top and two on the bottom.

She took her first step the other day, but hasn't taken any since then.  I think it will be soon.  I sure am going to miss her little hands slapping the ground when she crawl or how she pivots around in a circle when she wants to turn around.  Seriously, it makes my heart just melt.

She is a total mommy's girl and often no one else can comfort her except me.  Nice and not nice; especially, when you want to go to the gym and she cries when I hand her over to the daycare provider.

Man of man is she a pistol.  She has learned to throw a tantrum.  It is too funny to watch her spread her body out on the ground and cry and then 5 seconds turn it off like nothing happened.

She knows what she wants.  The other day at the gym a baby had a pacifier and even though she herself does not use one she chased that poor baby around the room until she managed to take it away from him and stick it into her mouth, but only to chew on it for a minute.

She has added some new foods to her diet such as mac and cheese and blueberries, but she only likes the inside of the blueberry and will spit out it's shell.

She is a wizard a climbing the stairs, but hasn't figured out how to go down and so she will sit at the top and squawk until someone comes to get her.

Arctic Mum said…
So cute! She sounds excact like Anna, tantrums..and she wakes up a couple of times a night. Last night her tooth came forward so she cried all night! Since we both work we take turns on sleeping in another room (scarily comforting, trick is not to end up like that...), but her father makes her sleep far easier than me! Which should be an argument for me to sleep in the other room every night, ha-ha. Oh well, that's how it goes.
September 6, 2012 at 4:08 PM

L-Diggitty said…
She is a perfect doll! I bet she's a little beauty even when she's throwing tantrums and stealing pacifiers :) The spunky little girls have always been my favorite (maybe because I was one myself...)
September 7, 2012 at 2:48 PM

Gail Dixon said…
Your addy is precious! What a great photo. Enjoy these years because they go by so fast!
September 8, 2012 at 2:19 PM