Belfast was one of the cities I was most looking forward to seeing.  I hadn't been to Northern Ireland on my previous two trips and so I was excited to see what the city had to offer.  Unfortunately, the weather just did not cooperate; however, I really can't complain as the other 9 days in Ireland were really pretty wonderful. We drove into Belfast late on Easter Sunday and headed straight for our apartment that we rented for the evening. It started raining by the time we were unpacking the car. When we woke up the next morning it was still raining and on top of that, it was freezing. We even saw a few snowflakes. This drastically changed our plans. Had it just been my mother and I then we would have dealt with it, but you can't do that when you have a gaggle of kids in tow. We saw Belfast in a drive-by shooting kind of way.  We drove to various locations and I would hop out and take a picture or two and we move on to the next location.  We ended up taking the kids to Victoria Square Mall for lunch where we ate at Frankie and Bennies Italian Restaurant. The kids were in heaven as they love pasta.  The weather didn't get any better, so we went to see a movie with the kids.  Peter Rabbit was a really cute movie. We grabbed some food at the local supermarket and headed to our hostel for the night in hopes things would be better in the morning.  Finding our hostel proved to be rather difficult as driving in Belfast is not an easy task.  They have a lot of one-way streets and their GPS system hasn't been updated and so what should have taken us 25 minutes ended up taking us two hours.

Belfast is famous for its graffiti art dedicated to the conflict in Northern Ireland and to other wars. 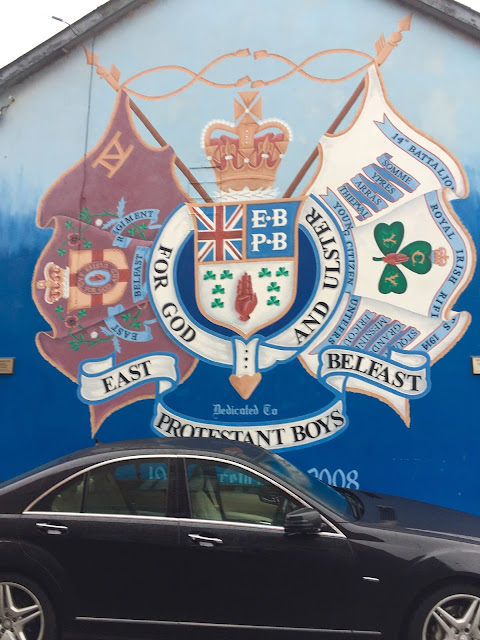 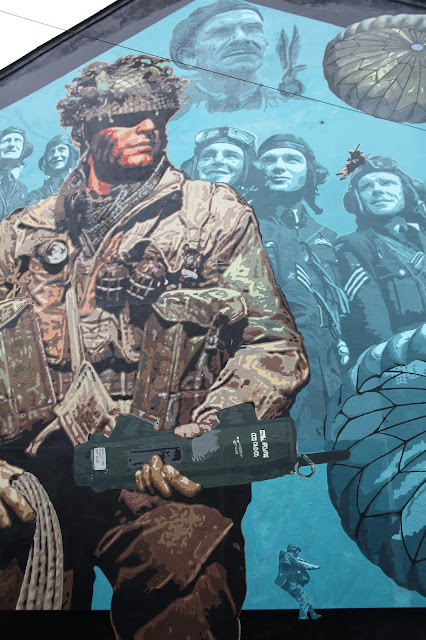 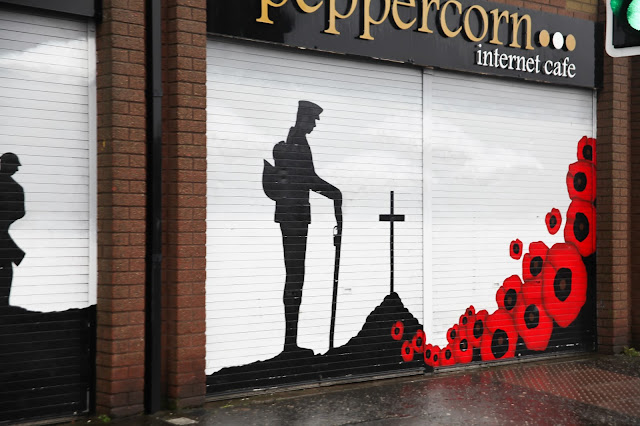 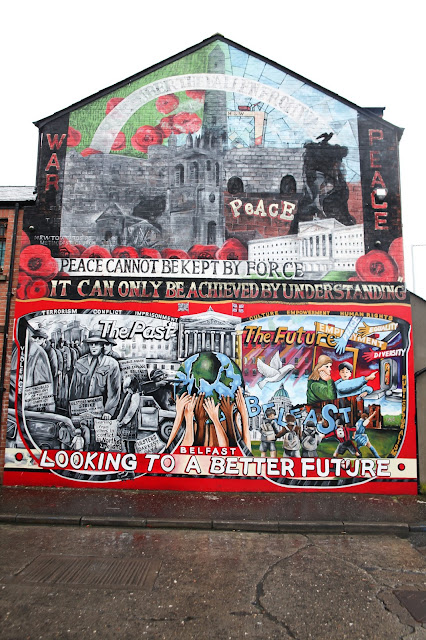 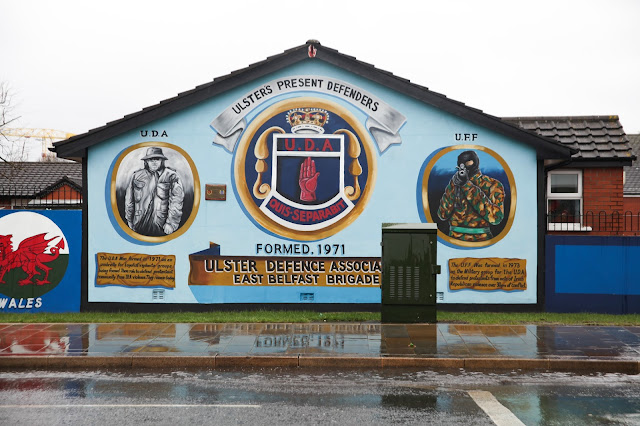 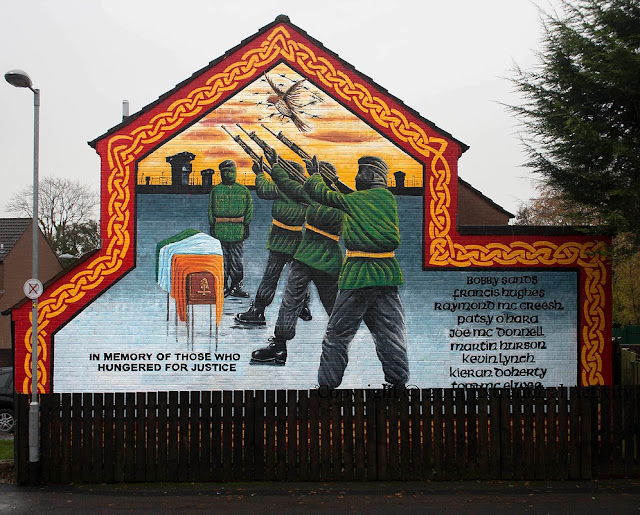 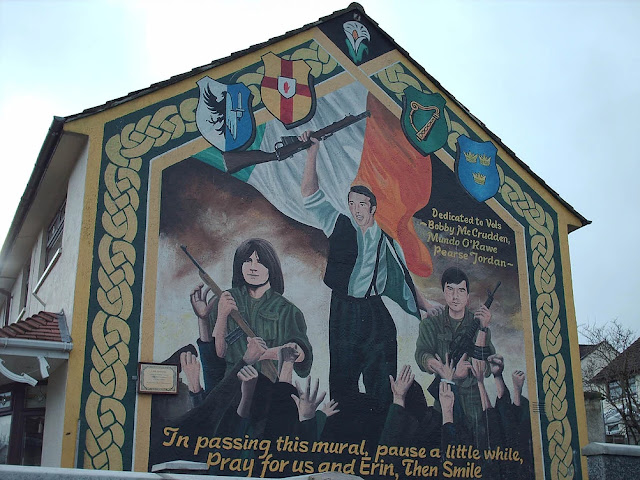 Then we drove to an area called the Cathedral Quarter known for its fun artwork. 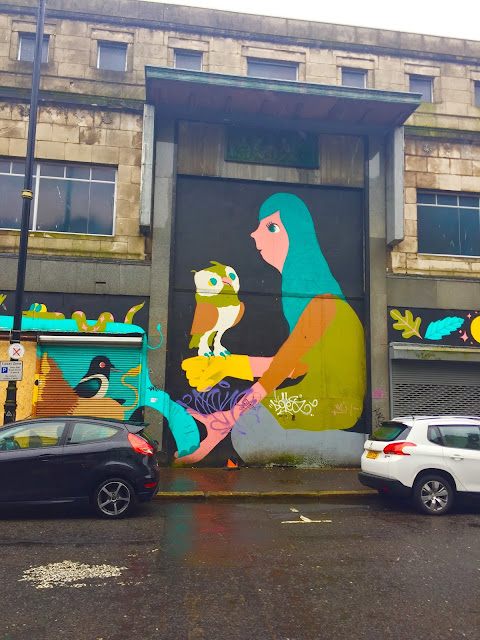 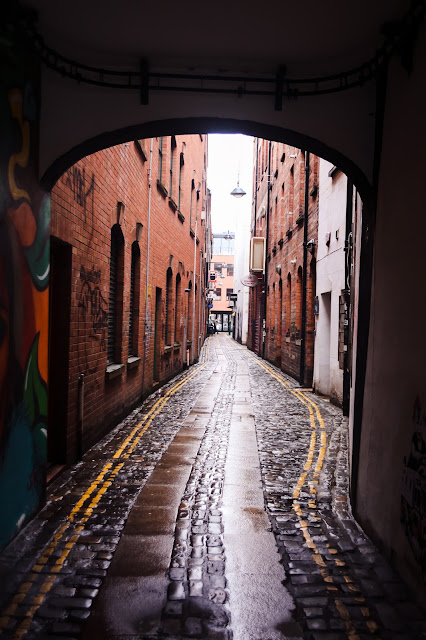 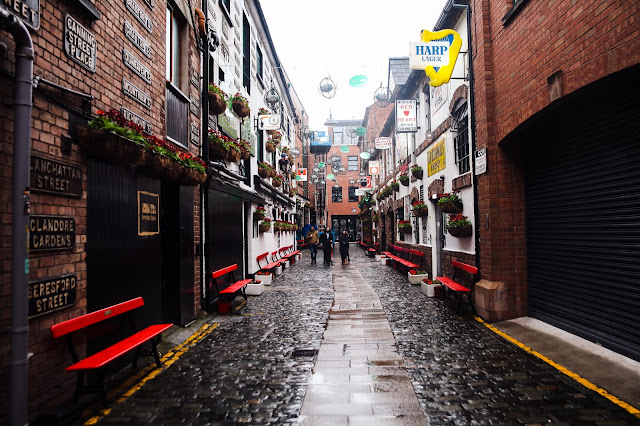 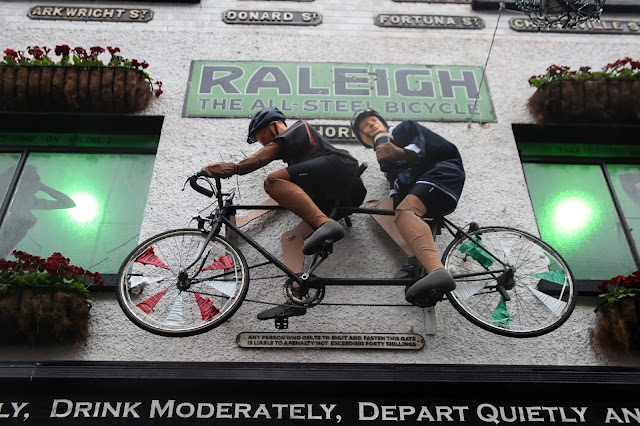 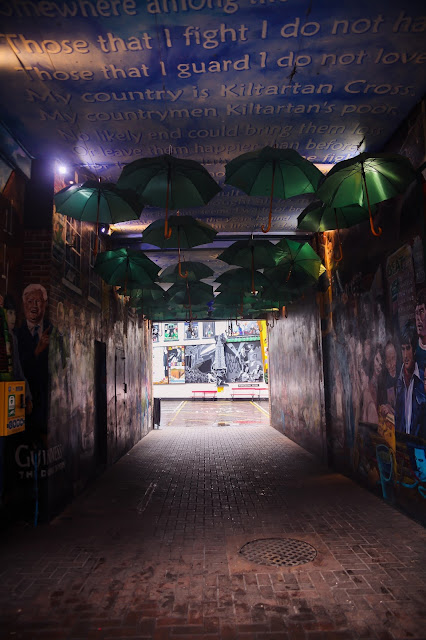 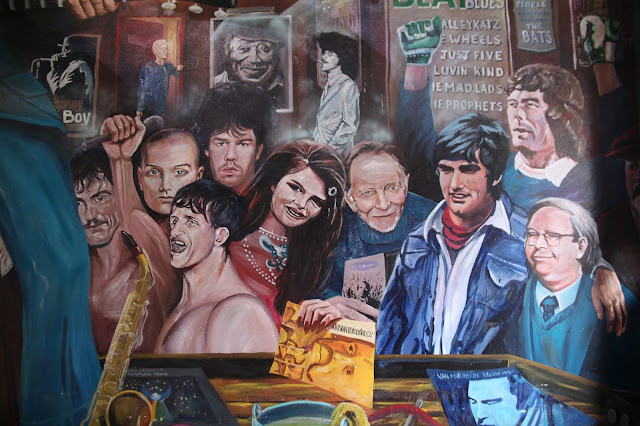 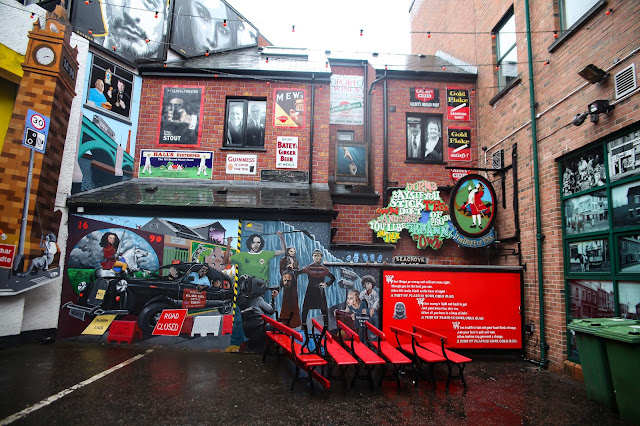 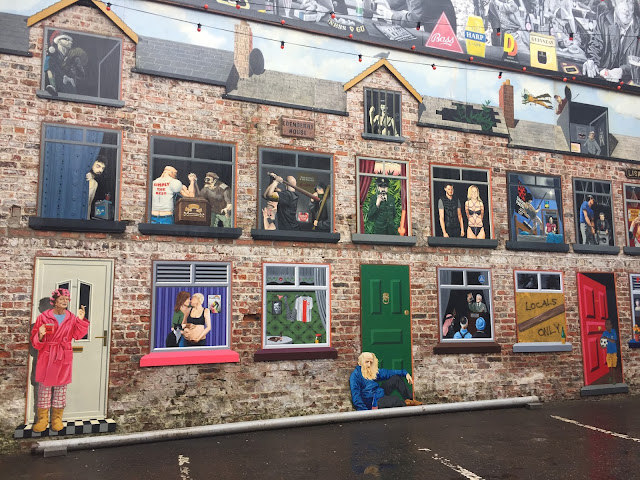 Then we drove by City Hall 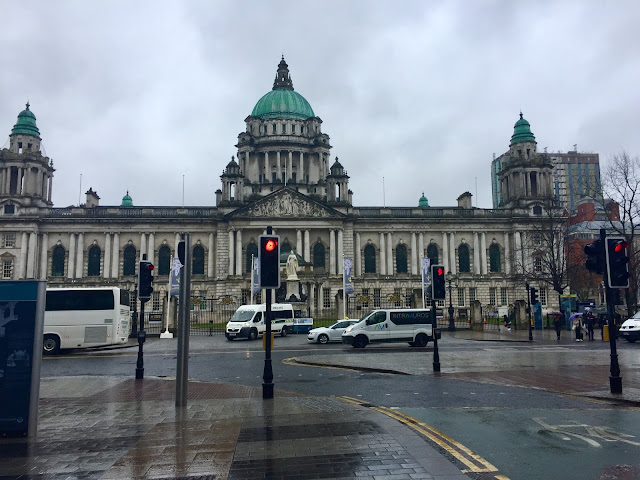 The weather did not prove to any better on our final morning in Belfast, but we did swing by the Titanic Museum.  The Titanic was built in Belfast.  If you have ever seen the traveling exhibits of the Titanic this is supposed to be 100 times even better as you will really see many of the details of the rooms and recreation of events.  Had Belfast been our first city we would have for sure gone to the museum, but at this point, the kids were done and I just didn't want to waste the money on whining kids. We left after seeing the outside of the museum and as you can see we swung by the C.S. Lewis exhibit. 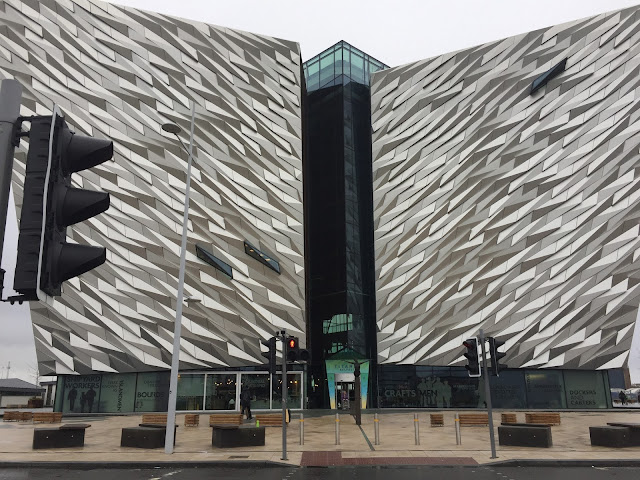 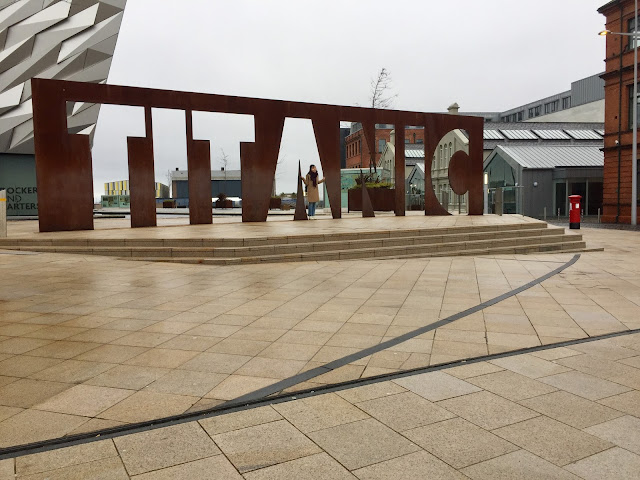 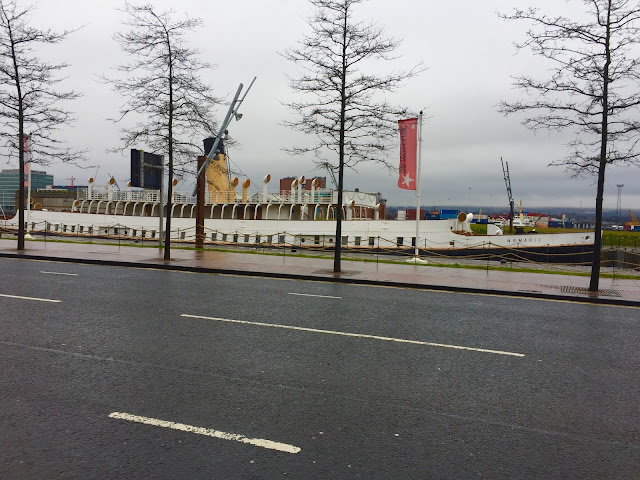 
One more thing I should add is that Belfast is not a walkable city.  Everything is rather spread out!  So you will need to rent a car, ride the bus, or hire a taxi.  I don't remember seeing any streetcars. While we didn't hire a black taxi, I have heard wonderful things about their tours, so do consider doing that.  They will give you a full tour of all the art dedicated the Irish Conflict on both sides of the story.  Also, a thing to note is that Northern Ireland is still apart of the U.K. and so you need pounds if you want to buy anything.  We were able to get away using our credit card and therefore didn't exchange any money.  Northern Ireland is also pretty expensive in comparison to Germany though only slightly more expensive to the rest of Ireland.  If you live in New York than the sticker prices will probably not shock you.  As for me, I practically had a heart attack when 4 hamburgers, two kids tray's of nuggets with fries along with one dessert, but no drinks cost me around 85 USD.
Labels: Ireland

Pat @ Mille Fiori Favoriti said…
I've been fortunate to visit Belfast, Ireland twice and really loved the city and the people! Your photos brought back wonderful memories. I also loved touring the Antrim coast and seeing it's beautiful scenery.
April 9, 2018 at 2:43 PM

NCSue said…
What an interesting place to visit!
Thanks for sharing your trip with us at https://image-in-ing.blogspot.com/2018/04/bedtime-at-biltmore.html
April 9, 2018 at 6:31 PM

Phil Slade said…
That's a lovely photographic tour Kelleyn. There is some rather sad art that depicts the Irish troubles but some very happy and vibrant art too. Today is the 20th Anniversary of the Peace Agreement. It's good that we have now moved on from that and I hope the "troubles" never return.
April 10, 2018 at 5:30 AM

Ruth said…
Well, you took a lot of nice pictures! Seems like a very interesting city. I experienced the bad weather situation this weekend. We had to jump from building to building to avoid getting wet. Luckily, things cleared up the next day.
April 11, 2018 at 12:07 AM

Life Images by Jill said…
having never been to Ireland, I enjoyed your post. Their street art is impressive.
April 11, 2018 at 9:20 AM

Mary K. said…
The city is full of so much artwork that you would never get bored. And oh to have had the chance to go inside the Titanic museum.
April 17, 2018 at 1:48 AM