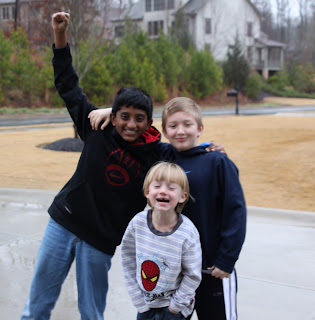 Over the holiday break we have been kind of hanging low.  Today, Winston was able to hook up with his friend Rohith who he doesn't get to see that often since they go to different schools and Rohith lives in the town where we used to live.  Anyway, today I picked up his friend and we went to lunch.  Addy, Roman, and Harris stayed home with the Babysitter Amanda.  It was nice to have lunch without miss trying to climb out of the high chair or on the table.  She doesn't seem to get that when you eat you are suppose to stay seated.  Afterwards, Winston's friend came over to our house to hang out.  They had a blast.  Minutes before his friend was suppose to go home it began snowing.  The boys ran outside and began doing a happy dance.  They were so excited.  They hoped it would stick.  Sadly no fluffy snow is lining our driveway.

Later on I was doing a happy dance as Harris decided he was going to make dinner for the family. He made Spaghetti Marinara and garlic bread.  He did an excellent job.  I guess I am going to have to put him in charge of making dinner more often.
Labels: daily life Winston

tinajo said…
You absolutely do have to - carbonara is great food!

dawn said…
I would be right out there with your boys doing the happy dance if it snowed.
Love to see happy faces on kiddies that are blissful from being with friends it just warms a mama's heart.

I laughed out loud at the comment, climbing out of the high chair and on to the table........yep, but the days go by so fast. LOL

Formerly known as Frau said…
What a fun day for him hanging out with an old friend! And dinner made by someone else wow what a treat! Happy New Year to you all!