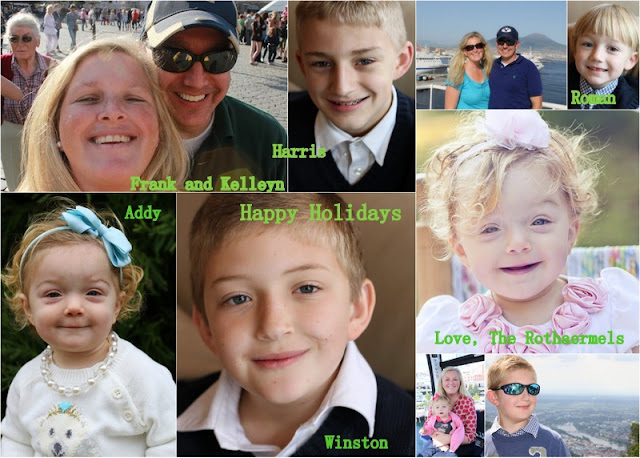 With Christmas just 10 days away, I thought I better get my act together and get my Christmas card made.  Usually, I have my cards out by the 1st of December but this year we have been way to busy.  This week I came up with an idea and purchased the children beautiful sweater vest and Addy a holiday sweater.  This morning rolled around and the weather  was just blah.  However, I have heard many photographers say that they perfer the over cast day.   I got the littles bathed and dressed and told the bigs if they weren't dressed they could forget about having Christmas.  One 13 year old insisted his hair despite sticking up looked fantastic.  We got in the car and went to the location.  I first took individual photo and then proceeded to try to take a group photo.  No one would cooperate.  Out of 60 shots in various configuations not one worked out.  Addy really didn't want anything to do with the whole process.  She would not sit on their laps and she wouldn't allow them to hold her.  We tried having her standing, but she would not look at the camera.  It just wasn't meant to be this year.   In the end this is what I came up with and it is what it is.  To tell you the truth, I knew it was going to be difficult and I would  perfer a root canal than to try an re-shoot the photos!  That being said, Merry Christmas and a Happy New Year!
Labels: Addy Christmas Harris Roman Winston

Rocks In The Wash said…
Oh, but don't you love the photos where one or two kids are not behaving and they have crazy sort of faces? I love those sort of photos, as long as you aren't paying a photographer to take the picture.

likeschocolate said…
This comment has been removed by the author.
December 15, 2012 at 8:56 PM

eplescrap said…
Oh that is so typical .... But I think you got a great Christmas card anyway :))
And now you're almost ready speech for a special occasion. Very fun to advance the events where not everything went as it should.

Wishing you and yours a very Merry Christmas and all the best for 2013 :)
Love Sønnøve

Shauna said…
I love it!! And I am right there with you on having a root canal that even thinking about doing a "re'shoot" for heaven's sake it takes so much out of us to take pictures with an number of kids!!!!

This turned out great. Merry Christmas...

Angela said…
Those are fine photos!! Nothing needs to be "perfect" all the time. The smiles, the transparent sweetness is what cames through! Merry Chrismtas!
December 22, 2012 at 10:30 PM