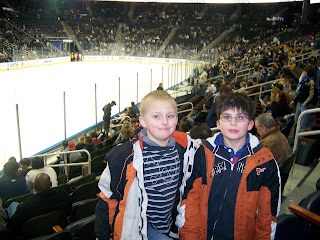 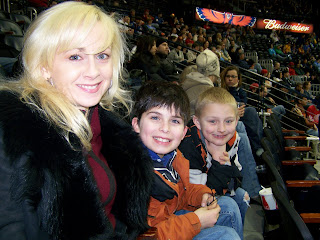 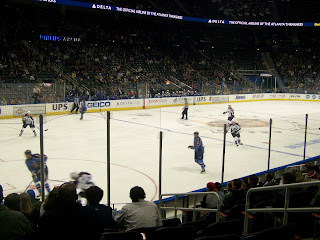 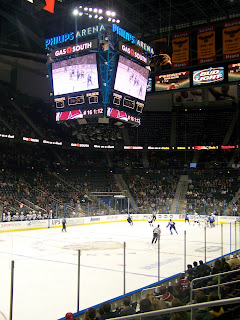 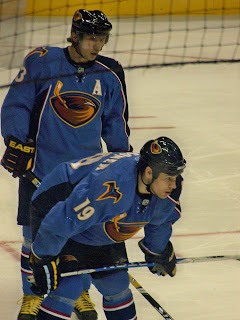 Up Close
Yesterday afternoon I got a phone call from my friend Sandra. She starts off by saying I know it is really last minuted, but I was wondering if you and Harris would like to go to the Thrashers game. I won tickets to Club seating and I have two extra tickets. I said a big giant "Yes". I would be crazy to turn the opportunity down. The tickets sell for a $130 a piece. There was no way I was ever going to get a chance to have those seats. We usually sit in the nose bleeders which is still nicer than watching it on TV, but to be so close was a treat. Yahoo! Within the first 2 minutes of the game the Thrashers had scored their first goal. Then within the first 5 minutes, the Thrashers scored their 2 goals. This was pretty amazing. Hockey is not a very high scoring game and usually, you can sit through 2/3 of the game before anyone will score. The highlights are the fights. Before the end of the 1st period, the Thrashers had scored another goal. The Colorado Avalanche scored 1 just seconds before the end of the 1st period. The second period Colorado scored another goal making it 3-2. The third period began and the Thrashers scored the 4th goal. Then just minutes before the third period ended Colorado scored another; however, they were not able to tie it up and so the Thrashers won 4-3. The boys were so happy.
Labels: Georgia

Unknown said…
Hey, we went to Starbies today for the first time since we met up with you there! It made me think of you (Jenna too). We also exchanged some books and I'm SO excited you sent Jenna the JP book! He's my favorite romance author so I'm going to vacuum my house and then dig in. Can't wait. Just wanted you to know we were thinking of you...and thank you.
February 25, 2009 at 2:46 PM

Nadja said…
sounds like a really fun day!
how short is your hair now?