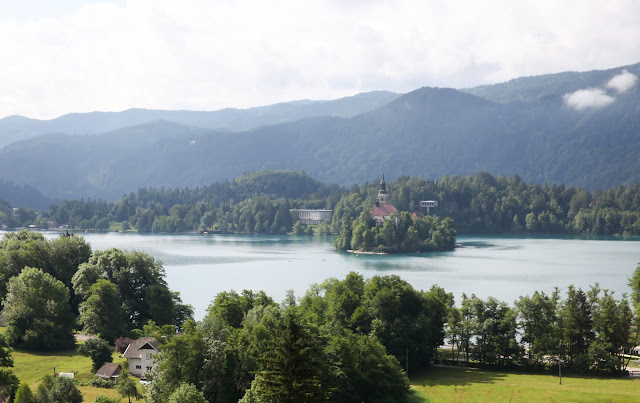 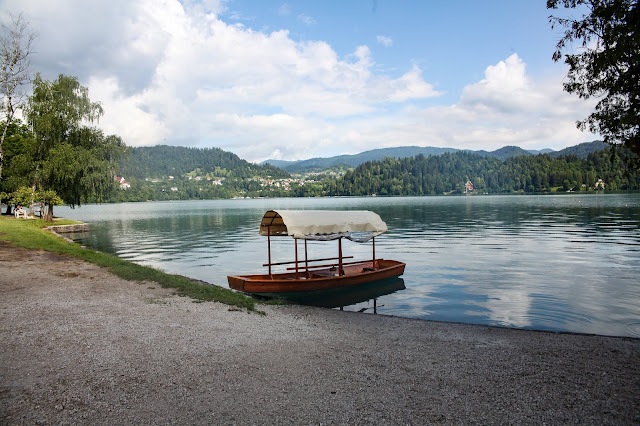 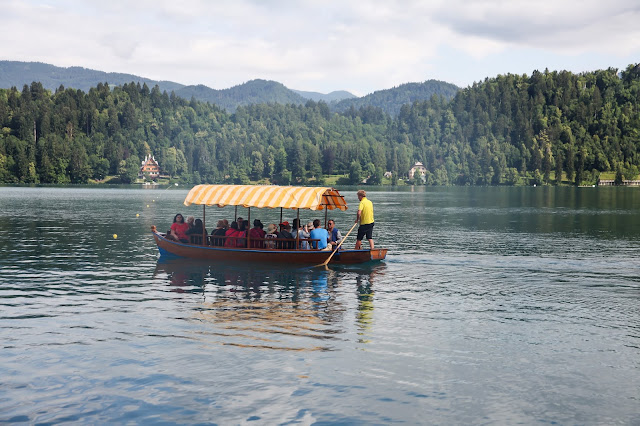 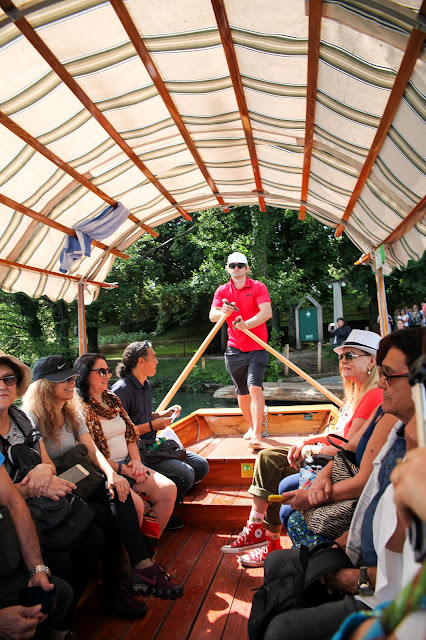 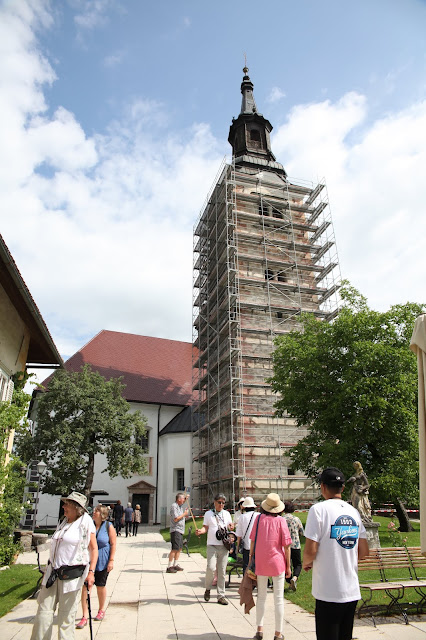 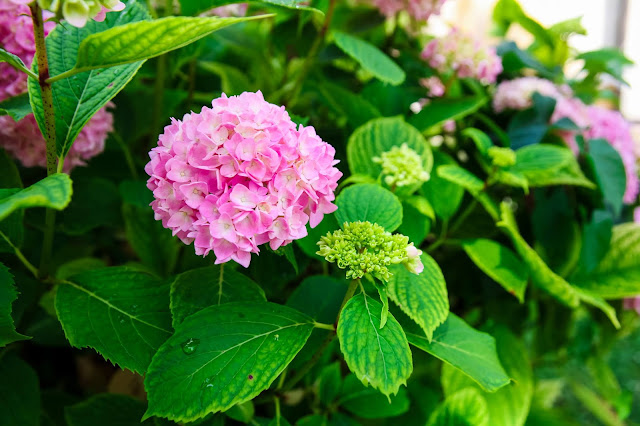 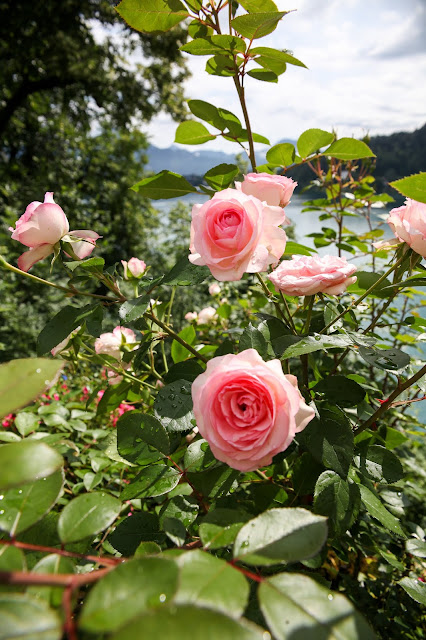 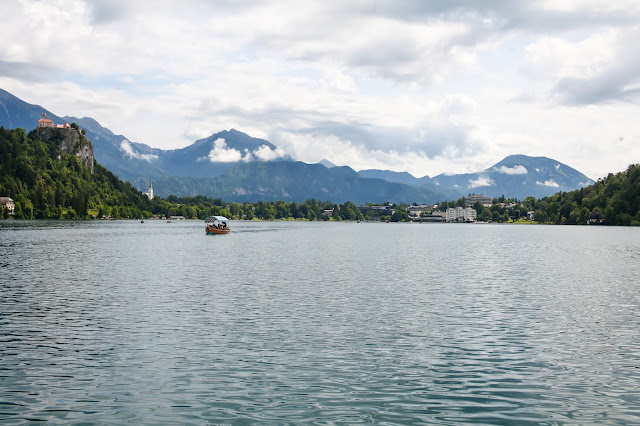 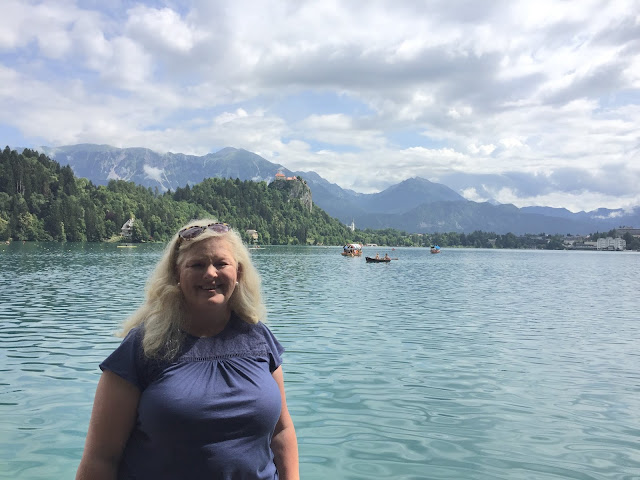 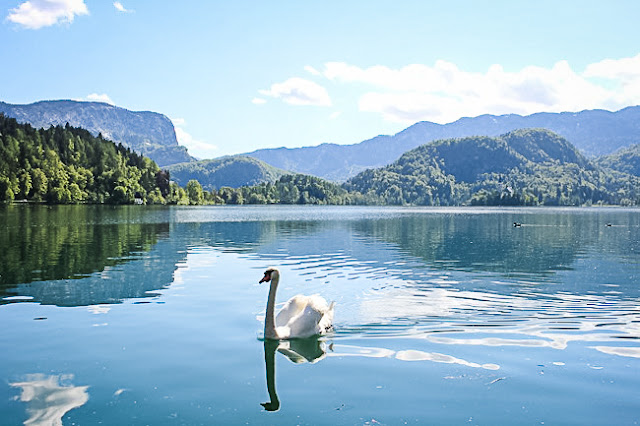 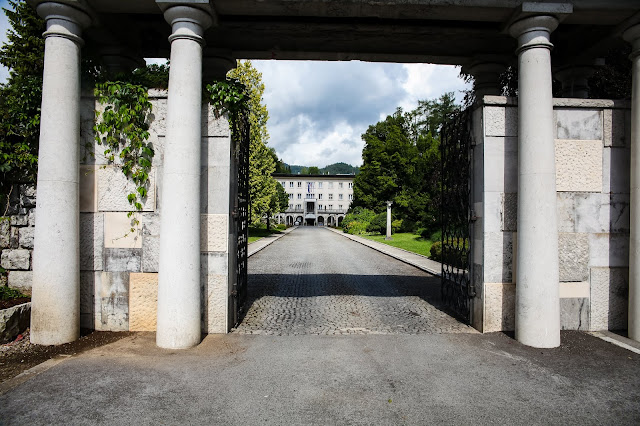 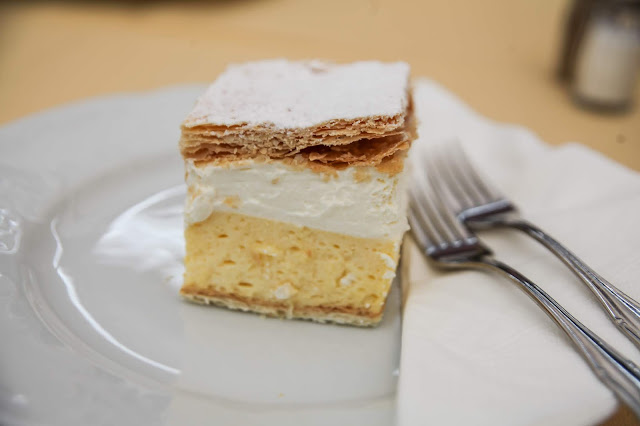 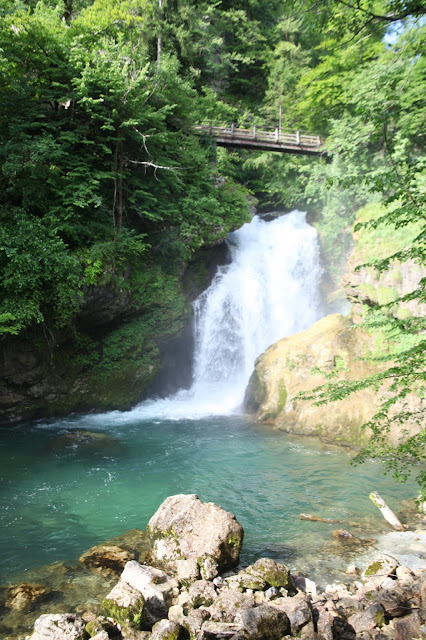 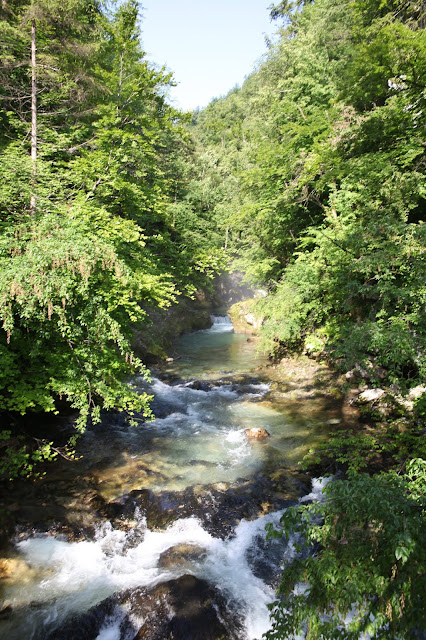 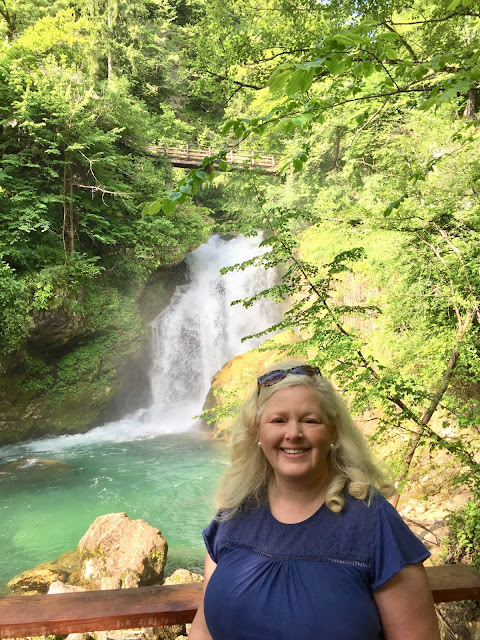 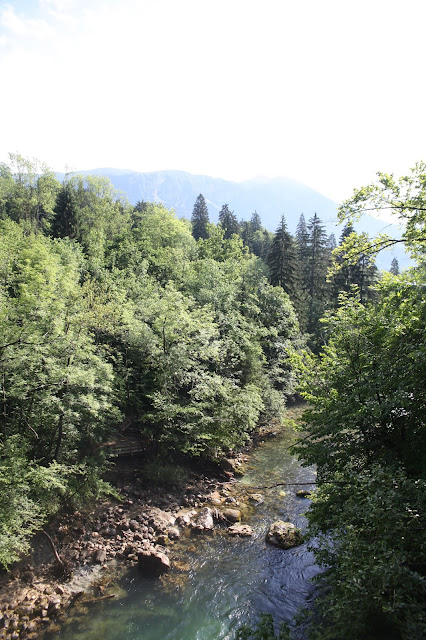 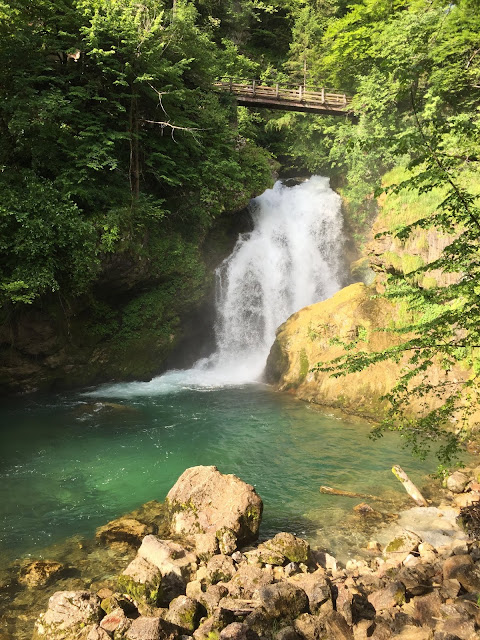 Hi!  How are you?  Are you watching the World Cup?  We are crying here at our house as Germany played so terribly  Anyway, lots going on at our house. School finishes at the end of the week and we leave on Saturday for Sardinia.  Then we have a week to turn around after our trip to pack up the house and head back to America.  A little stressful to say the least.  While I was in Slovenia, I took a tour to see Lake Bled and Vintgar Gorge.  I could have easily rented a car and traveled there myself as these two locations are only about a 45-minute drive from Lubjiana, but since I was traveling alone I thought it would be safer to go with a tour.  The only disadvantage to the tour was that I didn't have a chance to linger as long as I would have liked at each of the spots, and on the plus side I met some really nice people.

Legend has it that the area around Lake Bled had no water around it and that it was a lush valley of grass.  In the middle of the lush valley sat a large rock where the fairies resided.  At night time the rock would light up and the fairies would dance. Their Queen was Ziva. One day the fairies angered by the local farmers who allowed their sheep to graze near their rock warned the farmers to keep their sheep away.  The farmers just laughed and the fairies told the farmers again that if they did not keep their sheep away that they would build a barrier so large that no one without wings could step foot on the valley. Eventually, the sheep ate all the lush soft grass and a fairy broke her leg.  The fairies were so mad that with the help of their Queen Ziva they gathered to come up with a plan.  In the end, they conjured up so much water that they flooded the valley. Today, Lake Bled is the guardian of fairy hill.

Following our little excursion to the island, we stopped at a local cafe and tried a piece of the famous cream cake.  Of course, you can try the cream cake elsewhere, but the cream cake is pretty synonymous with Lake Bled.

Sadly, we were only able to see the Vintgar Waterfall as the gorge was closed to landslides.  I guess I will just have to go back.   Well, I need to run!  I need to clean our apartment today.  Not my favorite thing to do, but it has to be done.  Have a lovely day and come back to see the Postojna Caves.

p.s. I forgot to mention that the palace that is pictured in this group of photos used to belong to the ex-president Tito.  Today is a luxury hotel.
Labels: Slovenia

handmade by amalia said…
Lovely photos. Looks like you had a blast.
Amalia
xo

DUTA said…
Fascinating place, with a great legend behind it! Ziva, by the way, is a popular female name in my country.
The cream cake on the plate made my mouth water.
June 20, 2018 at 6:03 AM

Mandy said…
Beautiful! So jealous of your trip. I'd love to go at some point in the future!

molly said…
It looks like a very beautiful place

Little Wandering Wren said…
How fabulous, lovely pics! Are we watching the World Cup?! Of course, sending this to you from Moscow where I am living, breathing and loving the World Cup, sorry, not sorry ..... in the nicest possible way :) about Germany. Great atmosphere here great banter between the different team camps!
Wren x
June 21, 2018 at 3:05 PM

Angie said…
As soon as I saw that little boat with no people around it, I was ready to jump in for a row 'round the lake - preferable with my hubby - so romantic! Loved the shot of the swan and the view beyond - simply spectacular! Good luck with your move … I have done the international move before with kids, and there are so many moving parts you think you are going to pull out your last hair! I am sure it will go smoothly for you.
June 22, 2018 at 10:24 PM