While life has been busy, tearing the tendon above my knee has given me plenty of time to watch a few movies.  This go around there have been a few movies I have loved and a few I just could not force myself to continue watching and that is pretty unusual for me as I usually watch a movie to the end even if I don't like it. Up first is Lion.  Loved this movie.  Starring Dev Patel from Slum Dog Millionaire.  This story revolves around a little boy who is separated from his family and despite the efforts of the orphanage directors attempts to find his family they have no luck in finding them.  In the end he is adopted by an Australian family and is raised in a loving home.  Years later the boy begins to have flashbacks to his childhood and eventually pieces together the memories to located his mother.  While the storyline is heartbreaking it is also a story of love and hope. This story is based on a true story.  It has to be one of my favorite movies I have seen in a long time along with Hidden Figures which I featured in my last movie review. 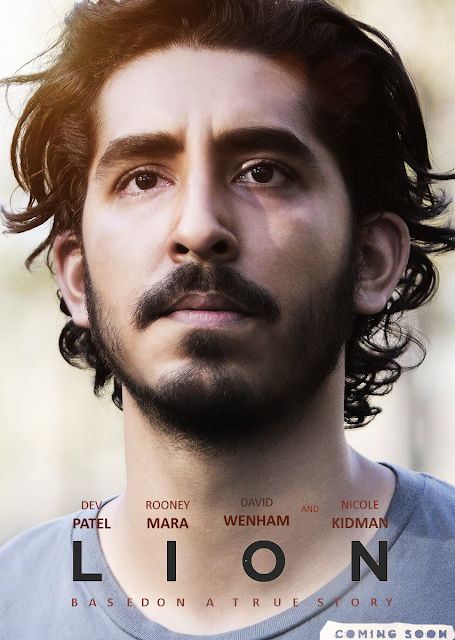 The next movie is called Fences.  Starring Denzel Washington and Viola Davis, while I can't complain about the acting I could not finish the movie. I love both of these actors! The story is about a African American man in the 1950's coming to terms with life. While I didn't really have a hard time with the angry black man storyline because to be honest black men of that era had a ton to be angry about, my biggest gripe with the movie was that I honestly had a hard time understanding what they were saying.  I only watched 30 minutes before I had to turn it off  because the mental exercise of trying to understand what they were saying was just too exhausting. Bad on my part I suppose because I know this is how Black people speak and it made the movie authentic, but it was just too much for me. 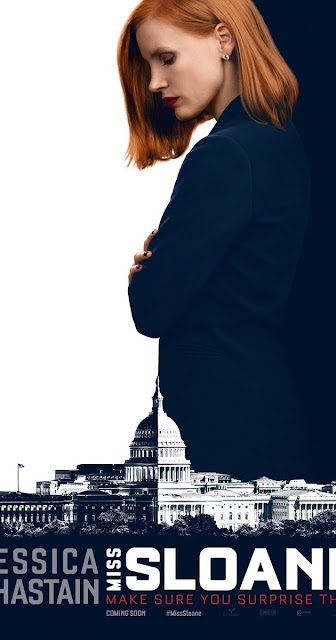 Sloan is a two thumbs up movie!  Love it! Totally Brilliant!  Jessica Chastain once again delivers a first rate movie.  The movie has all the similarities to a John Grisham movie of the 1990's.  Wish they would make more movies like those!  This movie is about a female lobbyist who decides to take on the Gun industry and work on passing anti-gun legislation.  Whether you are for or against it doesn't really matter as this movie is really about the effect of lobbyist on Washington.  The movie will have you on your edge of the seat the whole time and you will never guess the ending.

While Hollywood and critics declared this movie brilliant and a masterpiece this was also another movie I could not finish. The story line is about a teenage boy who has lost his father and his uncle who he is then left in the care of his uncle.  The uncle feels he is unworthy of the job.  Maybe the story is brilliant, but I just could not get past the f words one after another.  I ended up falling asleep. Since I rented it I tried to watch it again when I wasn't so tired, but nothing about the story or it's characters drew me into the story and so in the end I ended up turning it off and watching the next episode of This is Us! 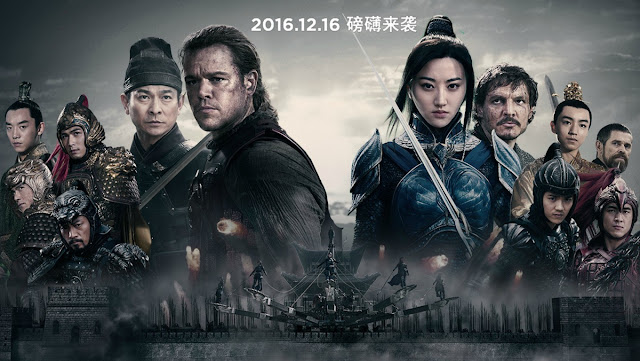 The Great Wall of China was another failure in my book.  Not my usual genre of movie I like to watch, but when my husband asked me to go to this movie I said, "I would love too," because he doesn't ask me to go to the movie that often. One of the things I was looking forward to was seeing scenery of China, but that wasn't really the case. The movie takes primarily around the wall and except for one scene in the Summer Palace that is all you get to see of China. I will give the movie credit for a couple of funny comical moments in the movie, but overall I thought the storyline offered very little depth. I came walking away knowing very little about the characters and how they got to be where they were at in the movie. While the movie could have offered a love scene between Matt Damon and the main warrior actress, the audience got nothing.  Now if you love martial arts than this movie will be a big hit!

Up next is Beauty and the Beast which debuted in the theater yesterday.  The Girls were so excited to see this movie and I was a little guarded about the movie because I had seen reviews stating that Disney was using this movie to push their gay agenda. This I did not find in the movie.  They christian critics said that Disney was using the character of Lefou who is Gastons sidekick to bring in the concept of homosexual love, and  as hard as I looked I did not find any of the claims to be true except for like two seconds at the end where all the characters are dancing and you see two men who switch partners and end up in each others arms.  I actually loved this version better than the cartoon version because of all the new songs they introduced.  I loved Emma Watson as Bell and was thrilled to see Emma Thompson as Mrs. Potts.  Keven Kline did a great job as Bell's father and the scenery and costumes were lovely.  My only complaint about this movie would have to be it that it was a little scary for the 2-6 age range.  Wish they had downplayed the wolf scene and the Beast was also a little too scary.  I had to tell my girls to close there eyes a few minutes a couple times during the movie because they were begging to go home.  Overall they loved the movie though and so it gets a thumbs up in my book.  Have you seen any good movies lately?  What are you enjoying watching on TV?

Preppy Empty Nester said…
I loved Lion, too. Manchester by the Sea was so darn depressing. Thanks for the recommendation on Miss Sloan. Sounds like one both my husband and I can agree on. Did you see Hidden Figures? One of my all-time faves.
March 18, 2017 at 4:23 PM

A Cuban In London said…
Can't wait to see Lion. I know I'm going to love it.

Loved Fences. I understand about the accent (I'm Cuban! I speak Spanish. English is my second language, which I studied at uni). What I will say is that after a while (more than 30 minutes :-D) the film begins to grow on you. The accent is rhythmical which makes it less difficult to get used to. It's almost like a pattern or a routine you learn. The script was tight, the performances (including supporting ones) were out of this world and, if you have done theathre as I have done, you notice the little plot devices here and there to make the action more enticing.

DeniseinVA said…
I enjoyed your movie reviews. I haven't seen any of them and though I have seen a couple advertised, don't really know much about them. One movie I rented a couple of weeks ago-I was a bit late on this one-was Bridge of Spies. I thought it was an excellent movie. I saw it three times, not something I usually do but a friend came the following week and I asked her if she would like to see it. When we got together the week after that with another friend, she asked if we could show our friend. By that time I had bought the movie. Unlike most movies where I get very bored seeing repeats, I found myself picking up things I had missed in the first two showings. Another movie I enjoyed was the animated Moana, such a cute movie, so colorful and visual. I actually watched that twice.
March 19, 2017 at 12:35 AM

La Table De Nana said…
I was surprised Manchester By The Sea..gained accaliam as I have friends who went and did not enjoy it either..Lion on the other hand..was loved.Dev Patel is a great actor..I love Jessica Chastain too so I would like that..Noah brought the Beast back from Orlando♥
March 19, 2017 at 8:44 AM

DaisyParker said…
Thank you for sharing such a good posts with us.
cheap luton airport parking

Alicia said…
I hardly ever go see movies and watch very little TV, but I'm glad to have read this post so I know which ones I would like to see. Hope you heal quickly!
March 20, 2017 at 3:21 PM

SabrinaGreen said…
Thanks for sharing such an amazing post. Heathrow parking
March 23, 2017 at 12:35 AM

handmade by amalia said…
I loved both Lion and Miss Sloane. And I'm SO looking forward to Beauty and Beast. I enjoyed your review.
Amalia
xo