I am not a big fan of the snow or the cold that is why we moved from Michigan to Georgia almost 14 years ago. It is kind of funny though because I grew up in Anchorage, Alaska and before that Lake Tahoe. Anyway, our state has issued a state of emergency effective noon today as they are expecting about 6 inches of snow to come down upon us around 4 p.m.  Kind of bummed as we were supposed to head to Chattanooga this morning to hang out with a few of the families from our travel group from when we adopted Ivy.  We rescheduled though and will hang out the beginning of March. Schools are letting out early today in order to avoid anyone getting stuck in the snow like they did a couple years ago. The city pretty much shuts down at any amount of snow as we just aren't equipped to handle it. No worries though as my refrigerator is stocked and I will finish up watching Mad Men. I am on the final season which I am kind of glad because it is so good that I am staying up way to late at night to watch.  Isn't this snowman darling?  Roman made it a couple of weeks ago!  It is super easy to make. 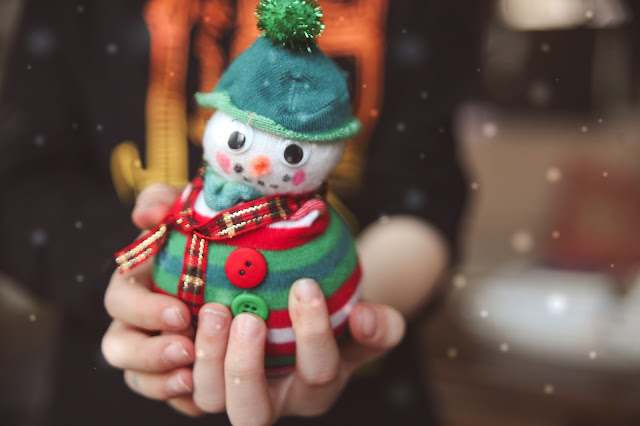 To make him you will need: 1 white sock, 1 colored sock, ribbon or scrap fabric, buttons. wiggly eyes, black sharpie, a pink sharpie, decorative pom poms, rice, and orange pipe clean along with scissors, a rubber band or thread, and a hot glue gun.

Begin  by filling the sock with rice.  You will need 2-3 cups.  Once the sock starts to look full. Rubber band the top or with thread close off the top.  Then with a second rubber band or thread create a head by dividing out the sock into two pieces.  Cut the second colored sock at the foot leaving out the heal and roll up to create a hat.  Roman didn't follow instructions and used the heal which worked out OK too.  Hot glue the pom pom on top.  Roman also didn't want his snow man to be solid white so he slipped the leg portion of the sock over the body; otherwise the snowman would be white.  Hot glue on the buttons and the eyes and with the sharpie make a smile and cheeks.  Snip off a portion of the pipe cleaner and insert it where the nose would go.  Tie the ribbon around the neck and if you want it to be extra secure you can hot glue it also into place. He had a blast making this adorable little guy.  I couldn't bare to put him away with the other Christmas decorations.  Well, I better go pick up the girls from school before the snow hits. Stay warm!
Labels: craft Roman

baili said…
hi friend ,my body gave shake to read that you belonged to Alaska .
glad that you moved where you felt better to survive i love snowy areas just as a visitor for while otherwise my body cannot take much cold and my joints freeze .
this is truly a cute little snowman and thank you for sharing how to make this as decor .
wishing you and family a safe ,healthy and happy new year .
January 7, 2017 at 2:28 AM

The Reader's Tales said…
The snowman is really a darling.
How nice, you come from Alaska. I always thought your country had a fairy-like landscapes. I love snow and the mountain so much. That suits me well because I live in Switzerland. I captured landscapes in the mountains in summer and winter and called them "Heidi country" this is my refuge. Happy New Year.
January 8, 2017 at 1:59 AM

DEZMOND said…
'tis cold here in central Europe too! We're ten below zero, it's frrrrreeeeezing! Thanks for visiting the spy, you're welcome to drop by again!
January 8, 2017 at 7:47 AM

Sussi said…
I live in Finland and I do not like the snow or the cold, D!

Sue McPeak said…
What a cute snowman, and warm inviting blog post. Thanks for stopping by CollectInTexas Gal and leaving your comment about my Rag Rug post so I could visit your with this reply...Rag Rugs were dubbed so back in the days when they were made from old clothes and remnants...braided was the most popular. I bet you have seen them before, and I imagine your mother knows about them, as well. It's something anyone can learn to do...no special talent required...just desire. Learn it with your daughter...I bet your Mom would love teaching you both. Thanks for stopping by...Happy New Year!
Sue at CollectInTexas Gal
January 8, 2017 at 8:49 AM

AntiquityTravelers said…
Stay warm! I remember 'snow-mageddon' what a mess that was! Very cute little snowman
January 8, 2017 at 9:12 AM