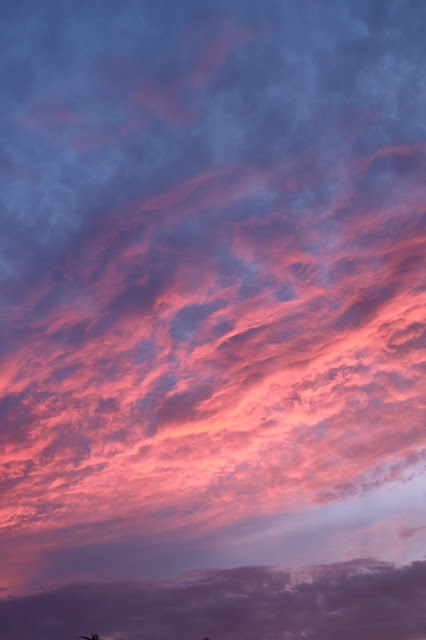 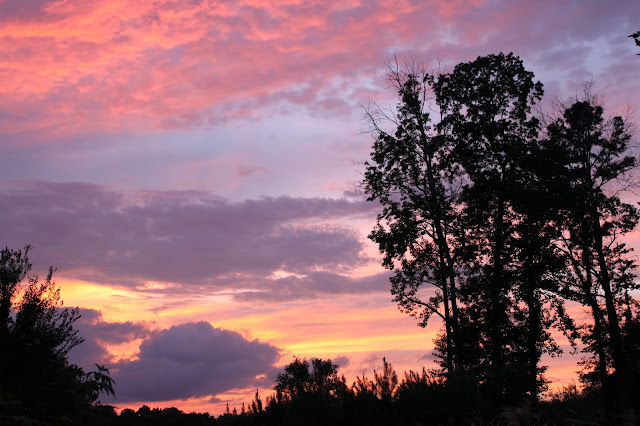 Isn't this sunset beautiful!  As I was closing up the house for the evening, I spotted this sunset out the window.  My breath was taken away.  I couldn't help to give it my full attention.  I ran to go grab my camera and sadly the photos don't nearly do it justice. I watched it until the sky became darker and darker and the sun dropped out of sight.  Speaking of taking my breath away, yesterday  I saw the face of our little girl form China for the first time.  Shortly after 4 p.m. the phone rang.  Normally, I don't answer the phone because it tends to be a telemarketer; however, I was in the playroom and the TV was on and the TV has a feature that announces who is calling.  I saw the name of our adoption agency.  Boy did I fly to the kitchen.  I picked up the phone and it was Sarah who asked me if it was a good time to talk.  I found this a little funny because what family who is adopting is going to say no when they are waiting to be matched with their child.  She then preceded to ask me if my husband and I would be willing to look at a file of a little girl who will be 2 next month.  This makes her three months younger than Addy.  She was born premature.  My heart was racing!  I was so excited as we have been waiting for this moment since march when our documents were sent to China. It didn't take me long to say, "Yes!"  Sarah forwarded her file and her photo!  She is beautiful!  She is so tiny!  She is only 15 pounds.  That is about 5 pounds less than Addy.  Frank wasn't home.  He was at the gym.  I tried calling him, so that I could forward the information to him; however, he didn't answer his phone.  I am not very patient, so Addy and I got in my car and went the the gym.  When I got there Frank was surprised.  I told him we had our baby.  He had a puzzled look on his face and I preceded to tell him that the agency had called and had a file of a little girl for us to look at!  He then told me that he had a feeling the previous night that we would be getting a call really soon about a baby.  I handed him my phone and he looked at her picture.  He said, "she is so cute."  We just sat there for a moment kind of stunned.   Sadly, I can't show you pictures of our sweet little girl yet.  Today we sent a letter out that will be translated by our agency stating our desire to adopt this little girl.  This letter is called Letter of Intent.  The next step will be a letter from China stating their acceptance of our desire to adopt and this is called Letter of Acceptance.  Once I get this letter than I can show her face here on the blog.  Just before Addy and I got back in the car to head home Frank said, "I just want to go over right now and bring her home!"  It will be anywhere from 4 to 6 months before we can go over and get her.  As of yesterday though, we are one step closer to bringing our little girl home.
Labels: Adoption Avery

dawn said…
congratulations to you and your family. How fantastic. Oh how I hated the wait for the LOI becasue I wanted to share the photos with everyone one LOL (i emailed them privately)
August 21, 2013 at 6:52 AM

Kristi said…
Wonderful news! I so remember "the call" each of the times our processes went that way. Praying for your tiny little one as she waits for her family to come and praying for you guys to keep your sanity as you wait for all the approvals to be able to go bring her HOME!
August 21, 2013 at 7:31 AM

Ally @ Even Miracles said…
That is very exciting news!! Congrats. I hope it is a very short wait and your little girl is in your arms sooner rather than later. In the mean time, the getting ready part is so much fun!!! Chat wait to see her and follow your journey to China and back.
Ally
August 21, 2013 at 8:44 AM

Ayak said…
Such wonderful news Kelleyn. Hope it all goes through without any hitch and you will soon have your new little girl with you xx
August 22, 2013 at 12:25 AM