It seems like Roman has been counting down the days until he turned five for months. Finally this week he turned five and I could say, "Yes, today you are five-Happy Birthday. There was no way we were getting out of having a big birthday party that was for sure. Including himself but not his sibling there was a total of 9 children at his party. Can I tell you it was one loud birthday and was very happy when the parents came to pick up their children. We started the party off with transforming each child into a Pirate by giving them a bandanna and penciling on a mustache. Then the children were asked to sit on the poop deck (the carpet) and I read the story How I became a Pirate. Afterward, the children were given foam swords. I should have given the swords out as the very last thing because for about ten minutes things got crazy. We lured them over to the table for some lunch of chicken nuggets, grapes, chocolate covered pretzel swords, and pirate juice (punch). Then it was time for cupcakes. Roman couldn't have been happier. The children painted their own treasure chest and played pin the treasure chest on the X. Time to open presents. While it was a crazy two hours, I think everyone had a blast!!!  When Frank put Roman to bed tonight he told his papa he didn't want to go to bed because he didn't want his birthday to end.  It was the best day of his life. 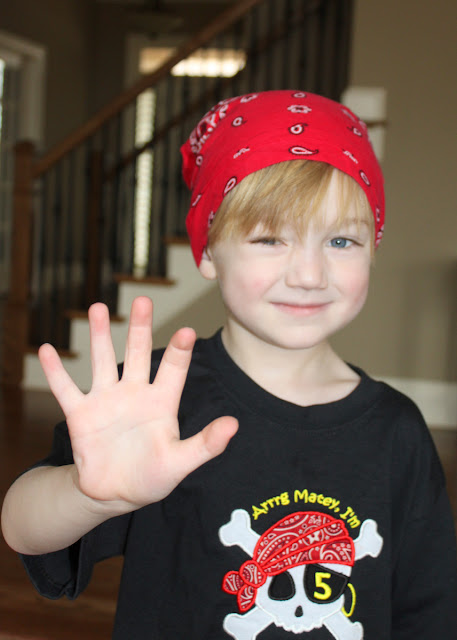 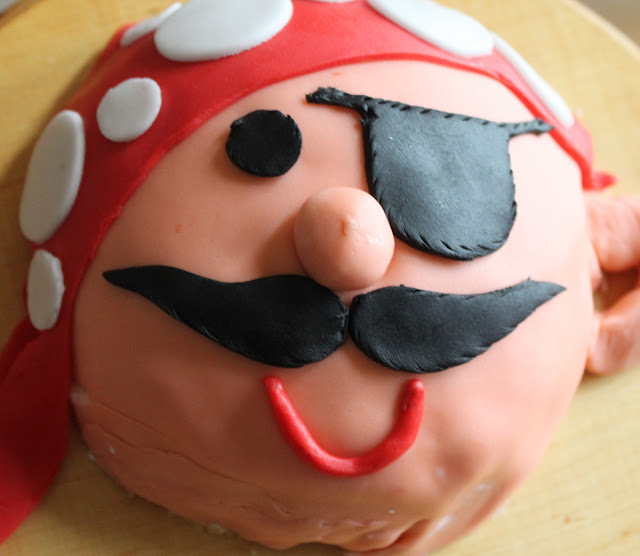 My first time working with fondant! 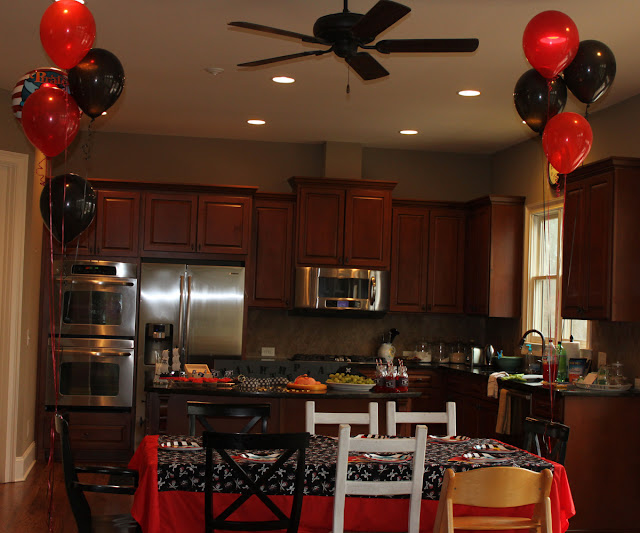 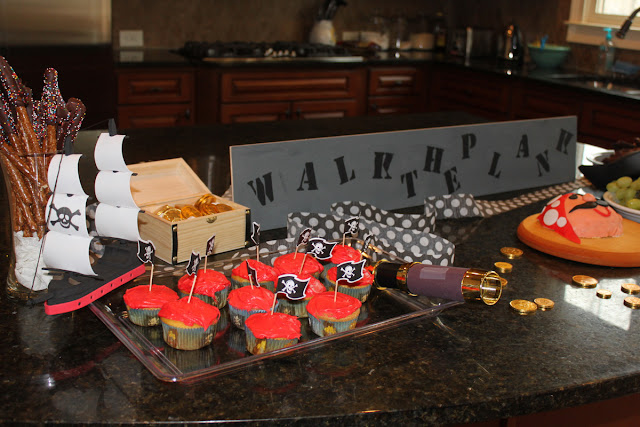 Shiver me Timbers !  Walk the Plank! 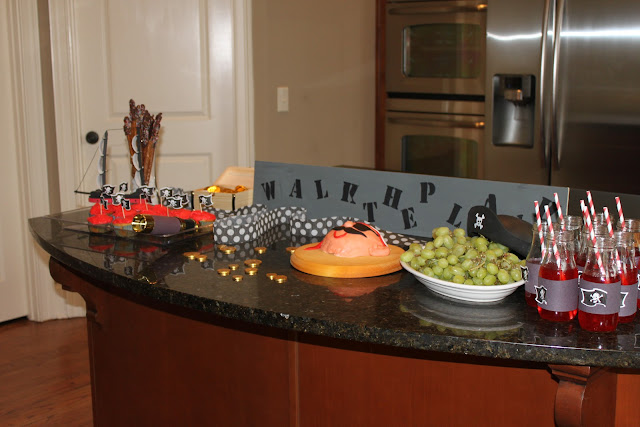 I made my own milk bottles by soaking 12 Starbucks Frapacinno bottles in boiling water.  The labels and sell date came right off the back.  The cost $13.99 in comparison to what it would have cost me to purchase these on-line I saved more than half the price!  Can't beat that!
\ 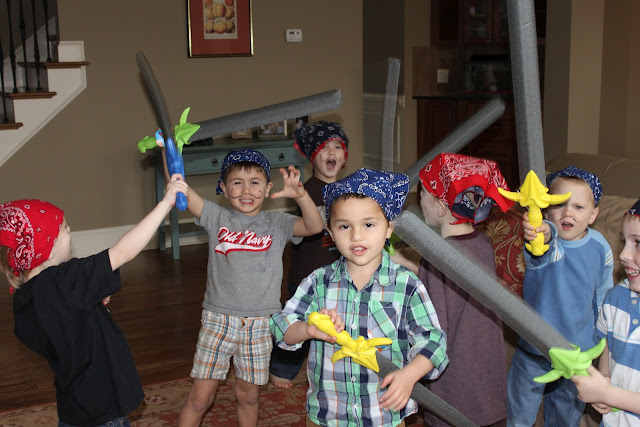 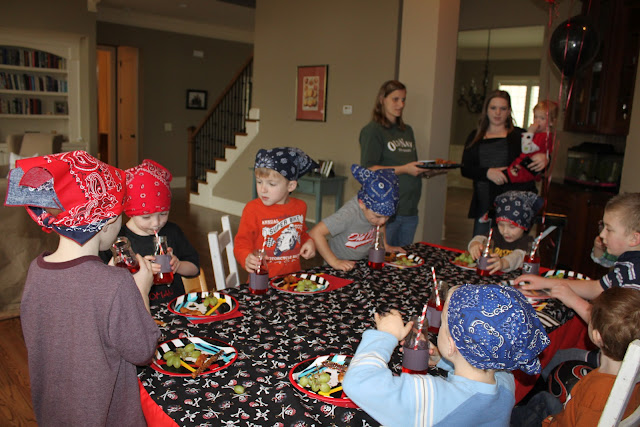 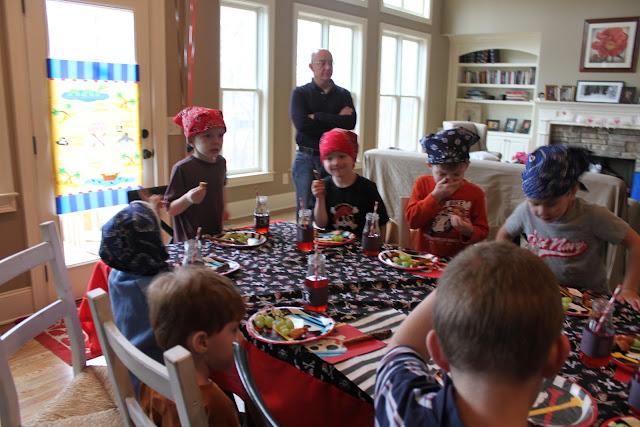 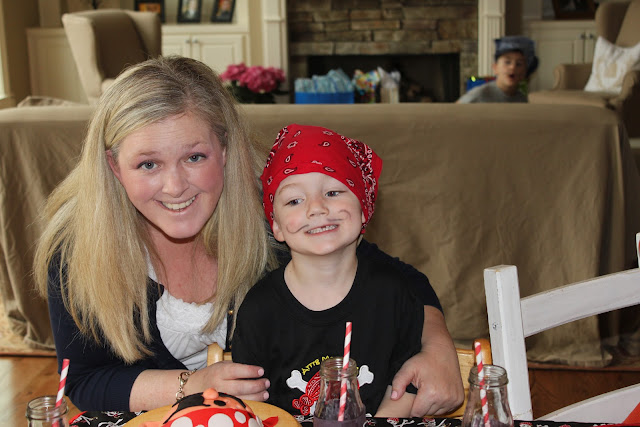 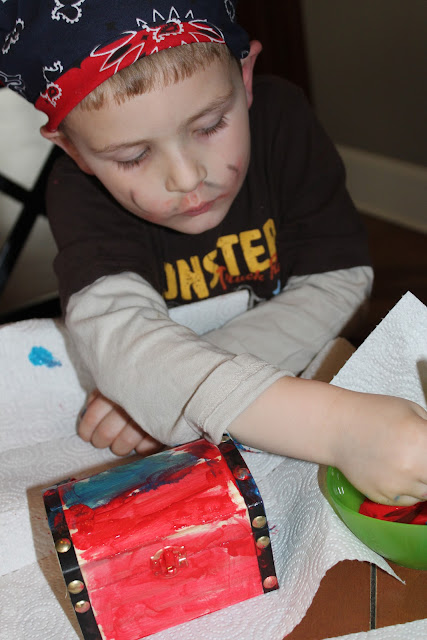 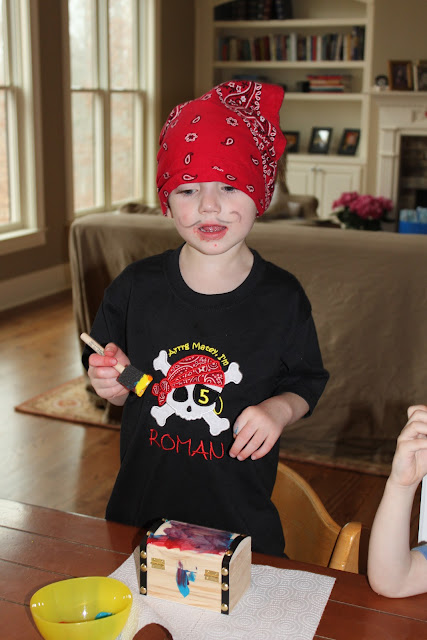 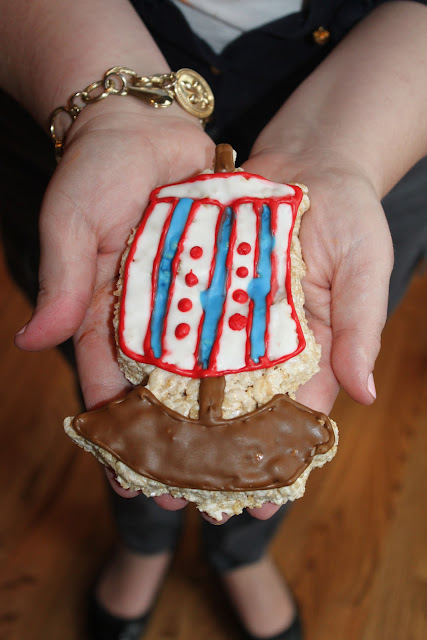 Arctic Mum said…
Happy birthday to him! My daughter is five in April, and we'll have a party at home. She talks about it every day..Last year when my oldest was six, I lost a bit control and the kids started running around outside. Puh, glad birthdays only last two hours...Am impressed of all you made for his birthday!
February 19, 2012 at 3:23 AM

Karyn Taylor-Moore said…
What a fabulous birthday party you gave your little boy! Happy birthday to him!

Formerly known as Frau said…
Happy Birthday Roman! What a super party....love everything you did perfect ! They look so cute in their banadanas and tash!
February 19, 2012 at 7:25 AM

Mandy said…
hey kelleyn, thanks for visitng my blog:) did you find me through ashley? i noticed you have a CHD baby, and i'm assuming you found me through her? i'll send up a special prayer for little Adelaide {which, by the way, LOVE her name} tonight.
February 19, 2012 at 11:59 PM

Shauna said…
Happy Birthday to your son. What a cute party with so many great things. Great job on the fondant. I don't know which is my favorite the sign, the bottles, the crispy ships....it's all so great.

You are too cute as well, I love that picture of you. Your children look like you. Precious.

Emily said…
Everything looks great and I LOVE the cake! What sweet pirates!

My daughter had a pirate party for her 6th birthday, but it was a pirate princess tea party. (Fancy!) :) We had plenty of sword fights though...I wish she and Roman could have been swashbuckling together!