Skip to main content
Labels
Posted by likeschocolate May 31, 2011 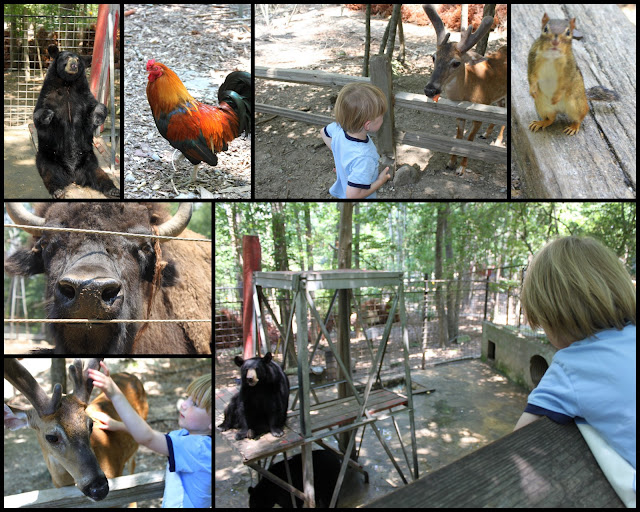 It is crazy to think that it is just a matter of weeks before the baby arrives.  I know that once she comes that it is going to be a little difficult to do the things we usually do for at least for a little while. I don't want the boys to feel like they just spent the summer stuck in the house.  It is also my goal to try and find time to spend with each boy individually.  Today I took Roman to the Yellow River Game Reserve.  I am so glad we went despite the heat which has been in the 90's for the last couple of weeks.  I think I must be complaining too much because I heard Roman say, "oh my back is killing me, and my feet."  My feet don't look like feet anymore, but look like they belong to an elephant. Roman had a great time.  He wanted to feed all the animals.  As we entered we had purchased a bag of carrots, it didn't last long. Even though I had seen Buffalo from the road as we have traveled across the states, I was surprised at how large they are.  They are massive.  Roman enjoyed stroking the velvet on the horn of the deer.  They are such gentle animals.
Labels: Around Town

Formerly known as Frau said…
Great shots looks like a fun place to visit! I hope your last weeks go smoothly!
June 1, 2011 at 7:44 AM

Arctic Mum said…
Same situation here: the children will be staying home from the 1st of July when kindergarten is closed, and they start up again the 1st of August. No holiday going away for us, just hanging around the house while we wait for the baby to arrive in mid-july (hopefully). So my plan is to get all sorts of things to put in the garden for entertainment: a play tent, a little house to play in, am even tempted for the trampoline road...
June 3, 2011 at 2:52 AM

Buckeroomama said…
That looks like a place my kids would enjoy.

I love one-on-one time with my kids.