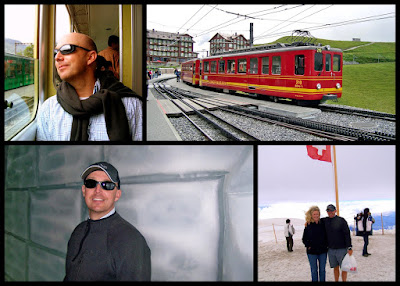 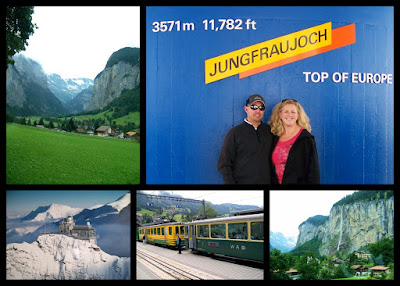 About a year and a half ago, I was watching the travel channel and saw Samantha Brown's show on Interlaken and the Jung Frau. I made a note of it, and before leaving I went to her website to print out the information. It was everything the show depicted and more. The views were stunning despite the cloudy weather. Frank was more disappointed than me, but what can you do. We picked August thinking it would be the best weather. The only thing I was disappointed in was Interlaken. I thought it was a not very authentic. The other little villages that surround the area are all very adorable and worth visiting. To get to the top you have to take a series of three trains that take approx 2 1/2 hours. The last train you go through 4 1/2 miles of tunnels, but they do stop once to give you a view of the glacier. The advertisements say it is the top of Europe, but that is not really correct since it is not the tallest mountain in Europe. The tallest being in Russia at 18,000 feet. Jung Frau is a little more than 11,000 feet. However, it is the highest rail station and post office in Europe. It is though between Heaven and Earth which is another one of their slogans. We brought a picnic lunch with us and ate dinner in the village of Grindelwald on the way down. Frank had a traditional Roesti (hash browns) pan with veal and mushroom gravy and I had the curry chicken plate with rice. I know not very traditional, but after being here for 4 months I was ready for something not so traditional. Swiss curry is very mild which I like almost better than your traditional Indian restaurant curry. All of the buildings in Grindelwald were dressed with flowers. Oh, the alpine meadows were blanketed in flowers at this time of year. Thanks to the grandparents we were able to enjoy the views without the children. It was the first time we have been alone in over two years.
Labels: Switzerland travel

sandals said…
Not sure if you can do this or not since your on a vacation with your hubby, but if you can I would like you to follow the Tagged directions on my blog. I didn't tag you, but I'd still like to hear what you have to say if you are able to!
August 7, 2008 at 11:38 AM