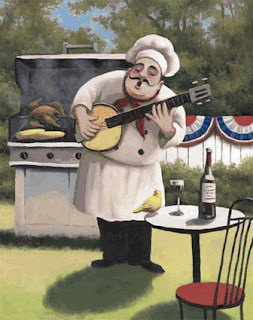 Have you ever watch the movie French Kiss or the movie A Year in Provence and watched the scenes where they are eating outside with their families? Well, last night I had the opportunity to go to dinner at my husbands' co-workers house. We were invited along with about 12 others from his work. Anyway, it was a dream right out of the movies. The scene was perfect. An apricot colored stucco house with inlaid tiles from Portugal and a red shingled roof. The house had a million dollar few overlooking adjacent farms, but also the Bodensee. The garden was dressed in Ivy, Pink Hydrangeas, Roses, and various other flowers. The air smelled of earth and wet grass. The attendants were dressed casual, but yet still had an air of sophistication as the men had sweaters draped over their shoulders. One might have thought we were in the Hampton's or a photo shoot for a Ralph Lauren advertisement. The conversation was lovely and it was nice to enjoy an evening without the children. The tables were covered in golden yellow tables clothes with ivy running down the length of them. The food was delicious as we were served a variety of grilled meats on Kabobs, tomatoes dressed with olive oil and balsamic vinegar, potato salad, cantaloupe with blueberries, and a basket of yummy bread. Dessert followed which was chocolate and vanilla bean mousse with raspberries and blueberries. One could not have asked for a more perfect evening.
Labels: Switzerland