Hello!  Hope you are having a great week.  The children went back to school and I have to say while I am totally excited to have them out of the house it doesn't come without just a tad bit of fear that they may pick up the virus at school.  We are praying for the best.  On the other hand, keeping them home doesn't seem to be a really good option either since they aren't really getting a fantastic education from what is being offered by the school district.  We kept our third son home due to his heart condition and I can't say I am too impressed with the workload he has been given.  When I called the school they didn't make any apologies and said it was the best they could do at the moment. My biggest shock is the lack of teacher involvement. I thought there would be a lot more teacher involvement!  Nope not the case, basically they are sent the days work each day and given some instructions on how to complete the work, but it won't be involving any daily zoom interaction or tutorials via YouTube.  Basically, they are on their own and I was told if they had questions they could email the teacher who would get back to them at some point throughout the day.  I feel like he is getting thrown under a bus! Ugh!  No winning here!  I had a slight panic attack by this and was told he couldn't switch back till after Christmas.  I guess I just have to let it go at this point and if he doesn't do well he can always repeat the school year.  Switching topics as this is just making me depressed.  I don't know about where you live, but it has been so freaking hot here!  I made this lovely Italian rice salad for dinner one night.  Kids stuck up their nose at it, but who cares. I love it!  So light and refreshing.

Cook 1 1/2 cups of rice according to directions on the package. I used long-grain rice.  Then let cool.  In the meantime.  Dice up one orange bell pepper, 1/2 cup of green olives, 2 tablespoons of capers, 2 scallions, chop two boiled eggs, open and drain 2 cans of premium tuna, a cup and 1/2 of tomatoes I used the grape tomatoes. Also, add 1/2 cup of cooked frozen peas  Then combine all the ingredients together in a bowl,  In a separate bowl whisk 1/2 cup of olive oil with the juice of one lemon and salt and pepper to taste. Then pour-over rice.  You can also add a core and seeded cucumber and oregano if you so desire.  Some recipes call for diced ham, but I am perfectly happy with my version. Enjoy! 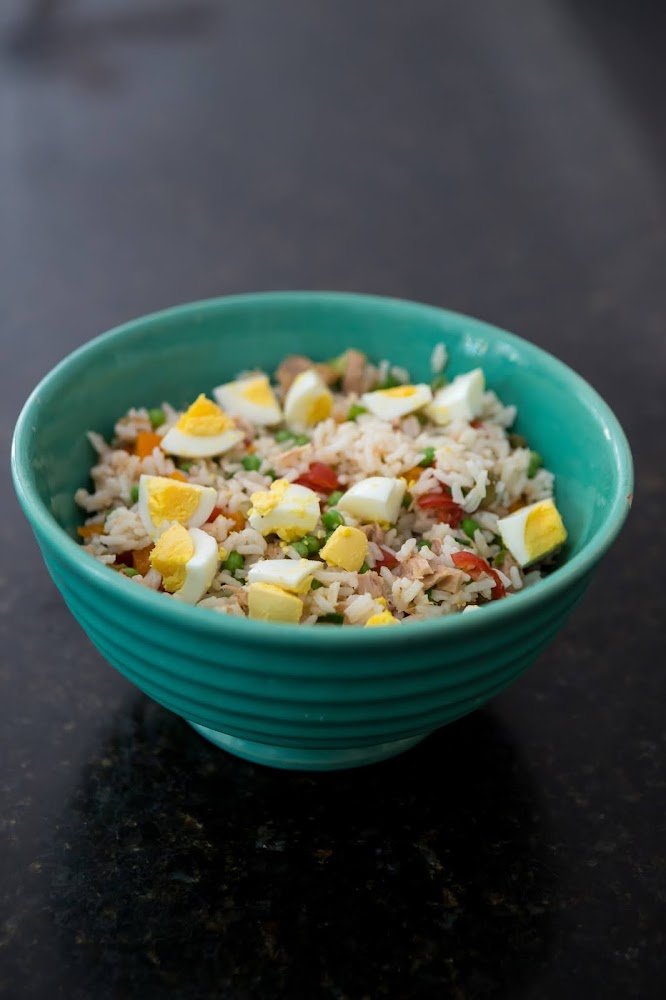 Mariette VandenMunckhof-Vedder said…
Dearest Kelleyn,
Well, I would freak out as well with so little involvement by a teacher. Looks like they abandon the kids and don't really seem to care.
My Pieter as a life long teacher went always out of his way for his students. To the point that after immigrating to the USA, he frequently got phone calls around 2:00 AM with problem questions. He always kindly answered and helped them sort out things. Then came the remark: 'Hope I didn't wake you up...?'' Pieter gently said, yes you did, but that's okay.
It would be a shame if your son, on top of his health issues, would have to do a school year over again due to the lack of guidance and support of a so-called educator!
Your salad is exactly what is on the many for us tonight. Guess I use the new type of Ramen that I found at Costco. Adding some veggies and salmon and we eat. It has been hot and will be for some weeks to come. We're not biking, too hot for Pieter's weak heart!
Heard from our graphic designer, she's back from vacation in Germany. She will have our eBook file ready by the end of this week. Oh, she has been postponing so many times and what can we do? I was done with the typing 3rd week of June. Now it's almost September! But at times we must put our brain on zero I guess. The other two versions, paperback and hardcover got released for sales yesterday. They were on pre-order since I uploaded them on July 26. Had really hoped the eBook would be ready for making it a threesome... Nope.
Good luck with the remainder of summer!
Hugs,
Mariette
August 17, 2020 at 4:12 PM

Su-sieee! Mac said…
I'm sorry to hear your school district hasn't given much thought to long distance teaching. I think it's a valuable learning and teaching tool that can help all kinds of learners. Best wishes to you and your family.
August 17, 2020 at 6:14 PM

Juniper/Jesh said…
any mother would have a panic attack with such blatant lack of teacher's involvement. I don't understand, what is up with the teachers. They behave like they are victims! I have a high school teacher in my family and there is no reason to act like this! sorry Kelleyn I feel for you, as well as for your son.
always hear about this salad but never tried it. it has to do with my Asian upbringing - it's foreign to have rive in a salad. Maybe I should try it :). thank you for your interesting post! HOpe you find some solutions for your kids' school - Jesh
August 18, 2020 at 2:05 AM