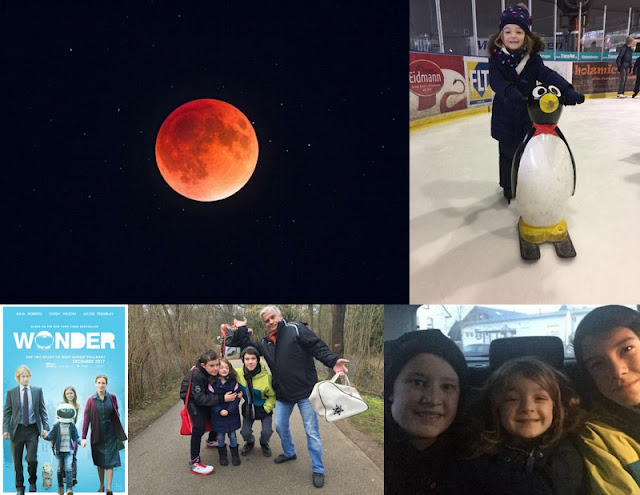 This week has been uneventful. The week started off with saying goodbye to my friends and just as they left two of my 4 children came down with the flu followed by a third a couple of days later. Thankfully, I believe we got a pretty mild version in comparison to what is going around in the states.  Everyone is doing well now and we are praying this mama won't get sick. I don't have time for that nonsense. Lots of snuggling took place this week along with catching up on reading and completing school work which will make sure the children stay on track to slip back into their school life in the United States. I think I mentioned this before, but the kid's school work seems to be about a year behind what they are doing back home and no one wants to be held back, so we are completing all the school work they would have in the states. Well, let me correct that statement. They are doing the two most important subjects which are math and English. We watched Wonder this week as a family. Such a great movie! It stars Julia Roberts and Owen Wilson who play parents to a boy named Auggie or August Pullman.  August was born with Treatcher's Collins Syndrome that causes facial deformity. The children with this disease born without facial bones and effects ears, nose, and throat resulting in multiple surgeries to help the child survive. After homeschooling Auggie for many years his parents decide it is time to send him to public school.  In the beginning, the transition is difficult for all, but in the end, everyone learns that as a society we benefit from people like Auggie in our world.  One awesome quote in the film is, "if choosing to be right and be kind, choose kind. "Opa celebrated his 81st birthday on Saturday.  The girls and I made him a pineapple carrot cake.  The recipe was labeled To Die For Pineapple Carrot cake and while the recipe was good, I wouldn't say it was to die for!  Unlike most carrot cake this cake was dense and slightly chewy.  I think one of the biggest factors in this is that there is no oil or butter and uses applesauce in its place. Oh well, you win some and you lose some.  Some of our relatives came to celebrate with Opa. We hadn't seen them in many years. They live in what used to be East Germany about 2 1/2 hours east of  Butzbach and so we don't see them as much as we should. After the party, Addy went with two of her cousins' ice skating. She had a blast! When she came home she was beaming from ear to ear!  Well, I  want to go finish a book that I am reading so I will leave you with a few pictures from the week.  Hope your week or weekend went well.  Sending out a Go Pats from Germany. My dad is so thrilled.  He is a big Patriots fan!  See you back here soon.
Labels: daily life

Sallie (FullTime-Life) said…
Even the flu doesn't slow your family down too much -- you obviously enjoy every moment! Stay well!
February 4, 2018 at 7:36 PM

Anonymous said…
Hm, I guess not. so here it is again. You have approached a very need subject, especially for parents. The reaction of the parents to a person outside the mainstream/normal realm is very important in how their children will view it later. Compassion is learned, rather than inherited. You are doing a great job in this aspect, Kelleyn! Thank you so much for including this for All Seasons - more parents need to read this!
Have a lovely week, Blog Friend!
February 4, 2018 at 11:14 PM

italiafinlandia said…
What an amazing beautiful red moon!
My compliments!
February 5, 2018 at 8:48 AM

Su-sieee! Mac said…
Your week sounded quite eventful to me. :-) And that photo of the red moon, cool! This flu season is something else. I've just knocked on wood that it skips over us.
February 5, 2018 at 12:21 PM

Angie said…
Wonder is on my must-see list - glad to hear from you that it is good. I usually like anything that features Julia Roberts. As for the flu/getting sick, I always found that as long as I kept myself busy, the bug couldn't catch me!
February 6, 2018 at 7:33 PM

Seraphinas Phantasie said…
Hi Kelleyn,
wonderful photos of your friends and family. I read the book "Wonder" and I was very touched from.
Have a great weekend.
Best, Synnöve
February 9, 2018 at 3:40 AM