There is so much more to see in Nuremberg beside the Christmas Market.  Sadly this city has a pretty shady history most recently known for it's role in WWII.  Nuremberg was seen as the quientessential German city and therefore played a huge role in much of the Nazi propaganda; especially, the films.  It goes beyond that though in that Nuremberg was a predominately Nazi stronghold. When we were planning our trip I suggested that we visit the Nazi Documentation Center and Congress Hall.  My husband was not so thrilled about the idea as he didn't feel like it fit with the Christmas theme of the day.  He also feels a great deal of shame for what his forefathers did during the war. Yes, going to the Christmas market and going to the this museum don't really go together, but not knowing when we will have a chance to go back to Nuremberg I knew we needed to go if for anything else but to acknowledge that the war really did take place. The documentation center focuses on how Hitler rose to power, and while it touches on the concentration camps it does not focus on them.  What you walk away from after visiting this museum is that the war just didn't come to be over night.  It was a gradual process that if we are not too careful we could find ourselves to be in the same predicament again, and we shouldn't be too arrogant that something like this could never take place.  While you can take pictures inside the museum, you are not allowed to use them for social media purposes.  Towards the end of the museum presentation they take your through what appears to be a narrowed corridor though it is a total optical illusion I think it was meant to represent how desperate and bleak things got at the end and rightly so as we all know that Hitler and his thugs were total swindlers who robbed everyone of their humanity.  He left nothing but destruction in his wake.  Following the museum we hit the market.  Given how late it was already in the day we didn't really have much time to see anything else except for St. Sebaldus church located just a couple hundred feet off the market.  Also located right there next to the market is Church of Our Lady or otherwise known as Frauenkirche.  Nuremberg is definitely on my list of cities I need to go back and visit. I really needed more than an afternoon there to explore. I would like to go on the underground tunnels tour, see Albrecht Durer's house, the Way of Human Rights, they have a fantastic children's museum called the Museum of Koffer, and I know the children would love to go to the Playmobile amusement park. 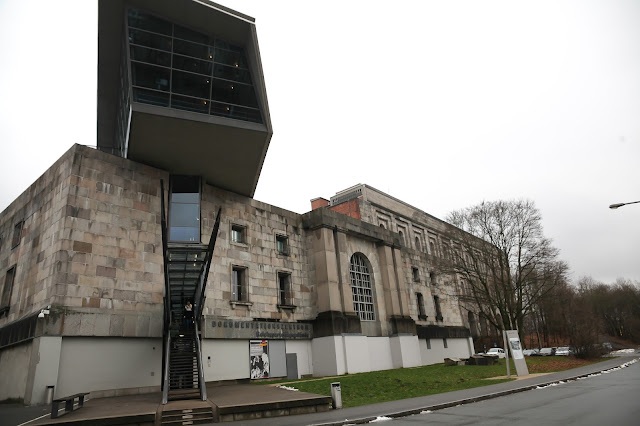 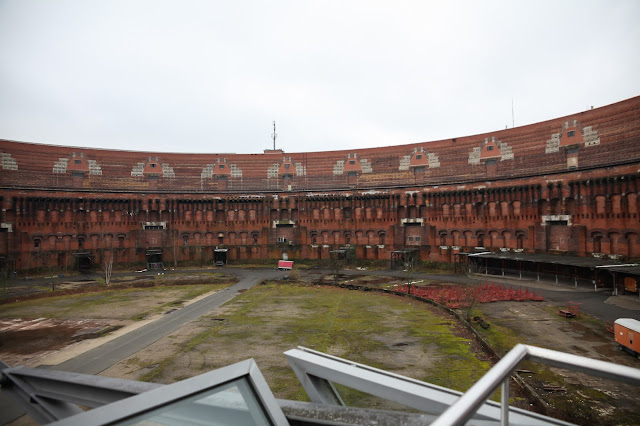 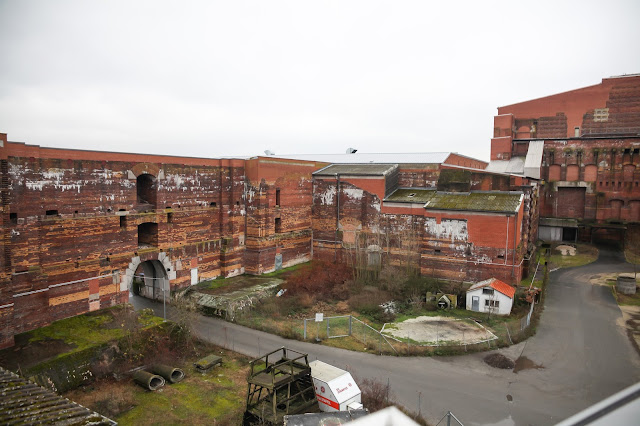 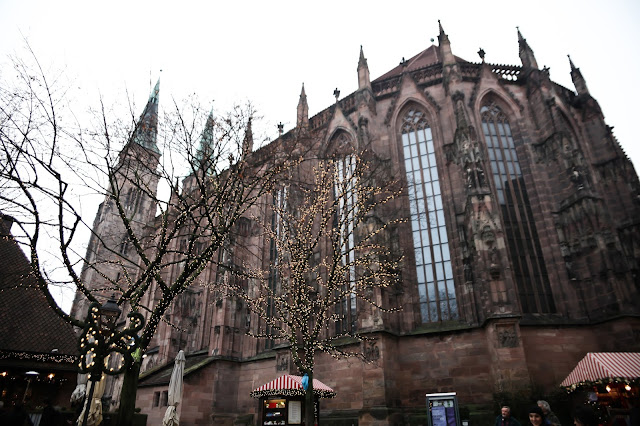 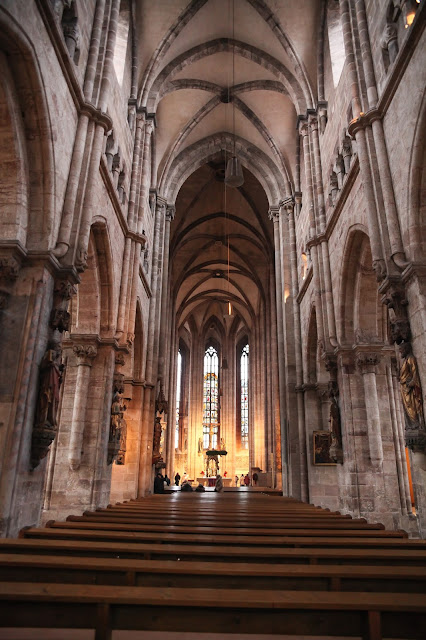 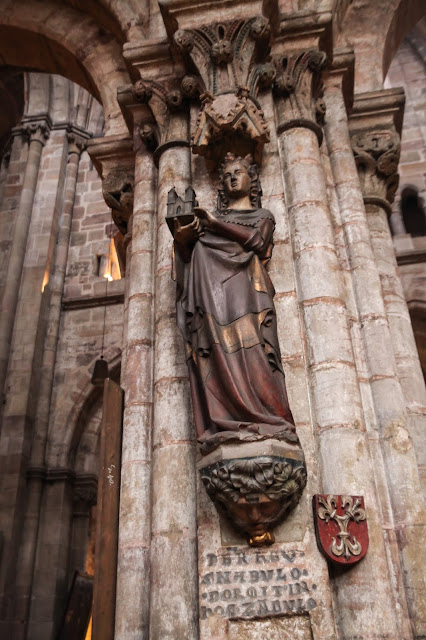 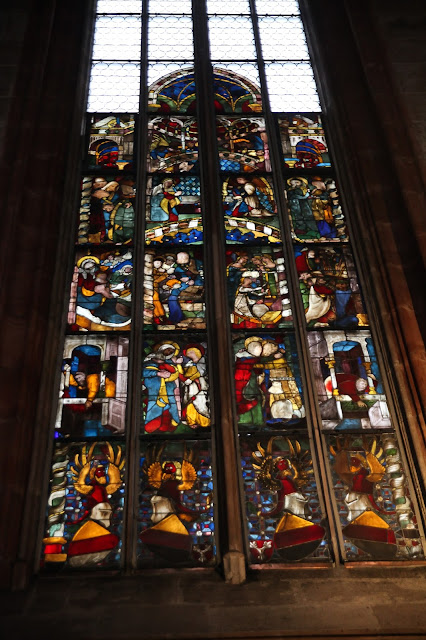 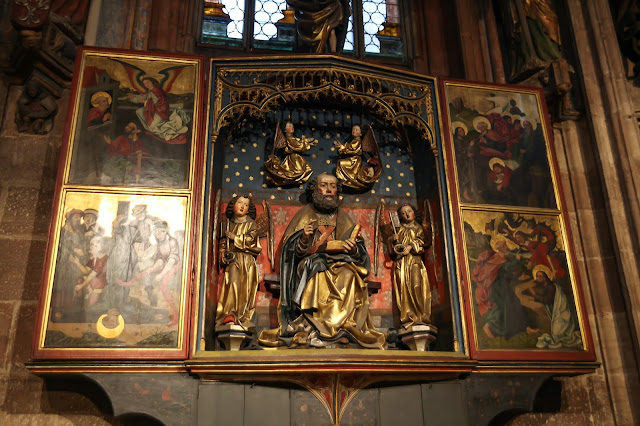 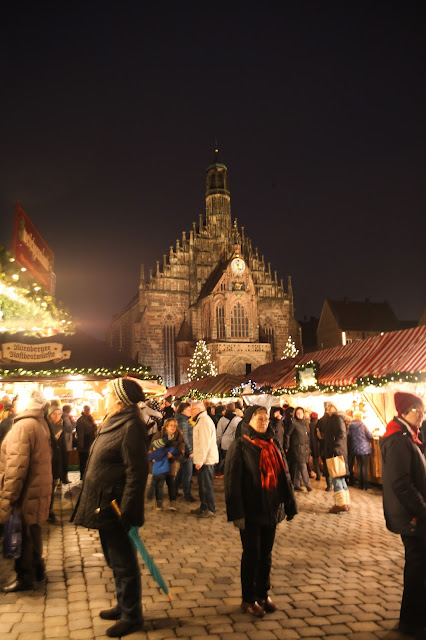 betty-NZ said…
I can imagine the excitement in the air with those lovely scenes! What a gorgeous place.
December 10, 2017 at 5:50 PM

Anonymous said…
There are so many sides and retrospects of the World War II story., and still uncovering stuff. I remember that the high school teacher (German language class)told us that he was so surprized that he had talked to Germans who had no idea about the concentration camps in the war, and were appalled.
Such beautiful art work in this church with the stained glass! One time you'll have to go specifically for the Christmas market:):)
Many thanks for sharing with All Seasons your experiences in Nurnberg!

Have a great week, Kelleyn, and thank you for your comment about the thatched roofs in Holland.
(In earlier times the East part of Holland had similar people and culture in common with the West-Germans)
December 10, 2017 at 10:31 PM

Jeanie said…
Thank you for posting about this. Nuremburg is one of the cities I've always wanted to visit in Germany for the two reasons you have explored in these posts -- the markets and the WWII history. That period fascinates me, not least because we appear to be going through something similar in our own country with the focus on xenophobic rhetoric and with a leader (?) who seems to use many of Hitler's techniques in his speech and rule of the country. I feel for those who are of the next generation or two who must still, like your husband, have that story as part of their nation's heritage. But they aren't alone; we certainly have our own.

Sharon said…
We fell in love with Nuremberg and plan to go back next year! The Documentation Center is sobering but so fascinating. I would recommend everyone should go to get a picture of that dark time. The rally grounds in ruins attest to the fall of that horrible regime. The underground tour of the tunnels is definitely worth doing. Amazing! Your kids would also love the excellent train museum. Have a wonderful holiday season!
December 15, 2017 at 2:01 PM