Skip to main content
Labels
Posted by likeschocolate May 23, 2016

The weekend was crazy busy beginning with the girls getting their photos taken in their tap and ballet costumes for their upcoming recital.  As predicted the rain began and I had to cancel a photo shoot which we rescheduled for a different date.  Saturday morning the rain continued which left us wondering if we would be able to eat outside for lunch with our friends and while the sun came out at the last minute and we served lunch inside a few rounds of ping pong where played or kind of played as the little kids wanted in the action.  BTW, lunch came out pronominal. We started off with a red pepper hummus with veggies and pita bread tray. Then I served a roasted garlic and rosemary lamb shoulder served along with a tomato and cucumber salad along with roasted potatoes.  I made a homemade banana creme pie.  Never made one before.  The pie requires vanilla pudding and I made mine from scratch.  Oh my is all I can say!  I am never going to make a box of vanilla pudding again because homemade is so fantastic and super easy to make.  Addy and Roman had a special date with their nana and went to see the Angry Bird Movie followed by a visit to Chuck E Cheese.  They were thrilled.  Normally, I wouldn't do photo shoots on Sunday, but it was the only day that two families could meet with me on.  The first family was celebrating their sons first birthday and wanted to commemorate the event with photos.  The second was later in the day for a family that I know through the adoption community.  Their daughter comes from the same orphanage as Ivy.  Ivy actually kind of looks like their daughter.  Now it is late at night and I am exhausted.  I am so excited that there are only 4 days left of school and that we will be heading to the beach next weekend.  No more waking up at 6:20 a.m. for at least 9 weeks.  I am definitely doing a happy dance!! What did you do this weekend? 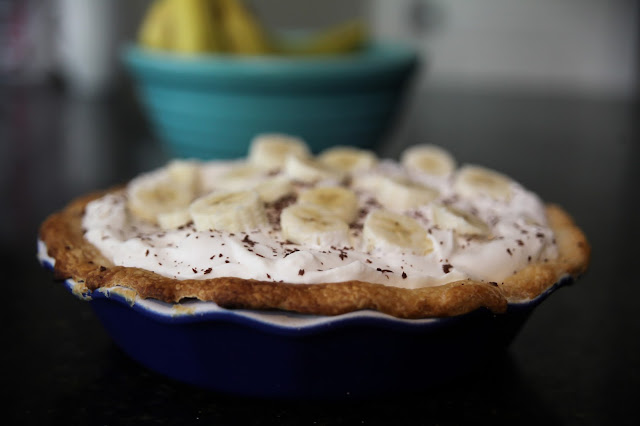 Ohmydearests said…
beautiful, nostalgic image! yay for holidays! we are going into winter now and with that our whole family was sick this weekend! have a beautiful week!
May 23, 2016 at 3:40 AM

eileeninmd said…
Hello, your pie looks delicious! The weather has been awful lately. Way too much rain! The kiddies outing sounds like a fun time. Happy Monday, enjoy your new week!
May 23, 2016 at 12:45 PM

Anonymous said…
Oh that pie looks so good! It's the favorite pie of my oldest daughter, and the family story is that on her birthday- in my hurry- the banana cream pie fell on the floor! Happy you could meet those two families - I can imagine they're significant relationships!
With little kids the beach is a perfect place, then they can play, play, play! Wise choice Kelleyn:) Many thanks for featuring the banana pie for SEASONS, and have a great time at the beach! Take lots of photos to show us afterward:)
May 23, 2016 at 2:16 PM

DeniseinVA said…
Great photos! Your header photo is gorgeous too. Sounds like you have a real busy life. I'm really interested in that pie of yours with the made-from-scratch vanilla pudding. The meal sounded delicious too.
May 23, 2016 at 4:45 PM

Pat @ Mille Fiori Favoriti said…
Your banana creme pie looks amazing! I will check out the recipe link. Did your children enjoy the Angry Birds movie? The coming attractions were so funny!
May 24, 2016 at 12:47 AM

CountryMouse said…
Mmm that pie looks delicious. I am going to a lunch tomorrow and have to take some food. I am still thinking on what to make. It sounds like you've been keeping busy.
May 25, 2016 at 7:17 AM

Ida said…
Sounds like you weekend was as busy as mine was. Hubby celebrated a birthday on Friday and Saturday I took my granddaughter to the Ducky Derby & Salmon festival. Also made shortcake. - Your pie looks delicious. I agree "homemade" is always better.
May 25, 2016 at 1:41 PM