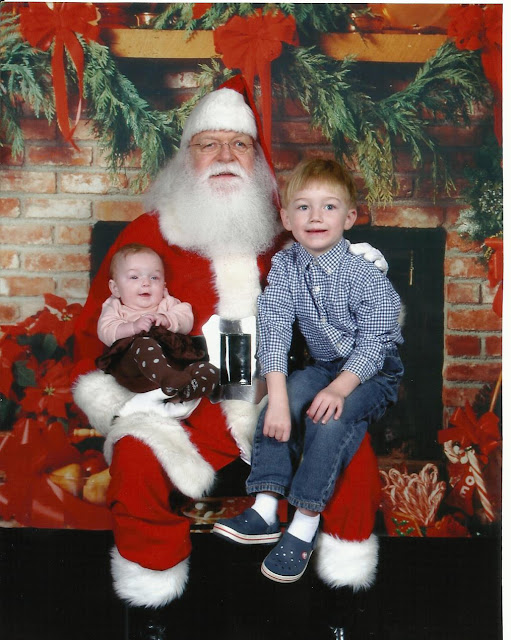 Here is the photo with Santa I spoke about the other day.  I guess I worried for nothing because you can't even tell that Addy threw up all over her shirt.  Though I think Roman looks kind of funny.  I kind of wished I had spoken up more with the photographer and had Roman stand next to Santa.  Roman came home from school on Tuesday and decided that we are Jewish.  He told me that we needed to buy a Menorah.  He sang the song dreidel dreidel dreidel we made it out of clay all day long.  This made Winston very mad.  He thought Heavenly Father would be mad at us because we believe in Jesus and Jewish people do not.  I explained to him that it was OK to learn and celebrate other religions and cultures without having to give up our own.  That this would make God happy.
Labels: Christmas

Emily said…
You modeled a really good attitude here! It's important, of course, to embrace your own religion and traditions, but it's also important to be open and respectful to the rest of the world. I'm sure your explanation was beautiful -- and I'm so glad you kept a good perspective!

Unknown said…
My great great grandfather was Jewish Rabbi, and when was a kid I always used to wish we were Jewish too.
December 8, 2011 at 11:28 PM

Dim Sum, Bagels, and Crawfish said…
I love that story and how you handled it, too. Happy Holidays to you and your sweet family!
December 9, 2011 at 2:28 PM