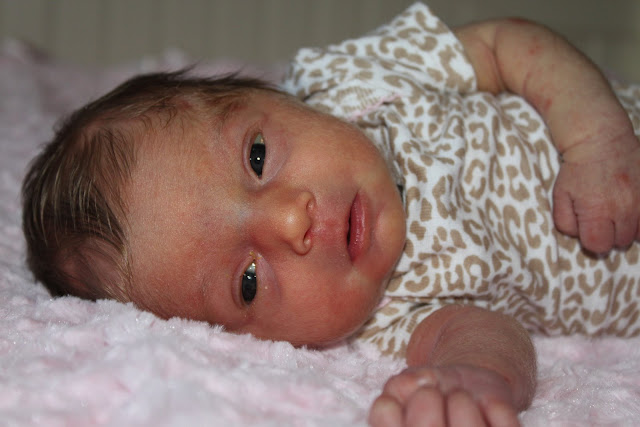 Oh my! Where has the week gone? It has been a haze of feeding, diapers, and sleeping. This recovery has taken a little longer than the last time because I had an allergic reaction to the epidural. Also because of the way she was laying in my belly which left me a little more bruised up from them turning her prior to the c-section. I guess if they didn't turn her she would have been traumatized in some way or another.  I can't really remember the doctors' explanation of why he had to turn her.  Maybe something to do with her lungs? I have to say though this little girl is such a joy. Seriously sweet that it makes my heart melt with each day.  Now I can understand why some people have mega families like the Duggars.  It can be addicting.  I can't imagine our family without Addy.  She truly is a miracle!  It is still a little strange having her here already.  She wasn't supposed to come until the 19th of July which was the day I was scheduled for a c-section.  If it wasn't for the pain to get out of bed or a cough, I think I would forget that she is not in there kicking anymore.  Yet, she is here and what a miracle it is.  Last Monday, started off like any other day.  I took my son Roman to school and came home to rest before going to the Perinatologist.  At 1:00p I got in my car and headed to his office totally oblivious to what was going to occur later that day.  I was feeling fine.  I was hot because it has been in the 90's since the beginning of May, but I was fine.  I checked in and was brought back to the ultrasound room where like every previous visit I hopped on the table and was asked how I was doing.  I told the technician I was doing fine despite being really swollen, but that was nothing new.  They asked me if the baby was kicking and I told them yes though maybe not as much as a couple of weeks ago which is not too abnormal in this stage of pregnancy.  However, in comparison to my other pregnancies she was pretty quiet and would often have me freaked out by how quiet she was, but just when I would be about to pick up the phone to talk to the doctor she would prove she was still in there.  Now looking back on the visit I think the technician did not let on that things were not right because when the perinatologist came in he said I would like to remeasure your fluids and the babies weight as opposed to saying everything looks within normal limits like previous visits.  He remeasured and said to me that he just didn't feel comfortable leaving her in my tummy and that if he did he felt she might not make it.  My amniotic fluid was very low and she had not gained any weight in the past two weeks.  Despite the placenta looking normal and there is a great blood flow in the umbilical cord something had to be wrong because she just wasn't growing.  As he left the room, he asked me to sit in the waiting room while he talked to my OB.  Within a few minutes, his assistant came out and told me to drive myself to the hospital.  I asked if I could go home first, and she told me no that I was to go straight to the hospital and to make sure I didn't eat or drink.  I called my husband and told him to meet me at the hospital and then called my mother to have her come and watch the children.  I was in such shock that after going out to my car I had to go back into the office to ask which hospital because I had planned on delivering at the hospital closest to my house; however,  as I thought they had said they wanted me to go the hospital in the city because it has a better NICU. 35 minutes later I arrived at the labor and delivery where they checked me into my room.  Thankfully, the nurse allowed me to take a shower before changing into a hospital gown.  Then my husband arrived where we waited together until the took me back to the OR.  My c-section was scheduled for 9:00 pm since they were waiting for my stomach to empty out a little.  I had just eaten lunch before going to the doctor.  I think both of us held our breath until the nurses announced that Adelaide was doing great and was breathing on her own.  They told us that she would have to go to the NICU due to her size: but if she continued to breathe on her own, could maintain her body temperature, and eat then she would soon be able to come to our room.  We expected her to be there a week given her gestational age; however, 3 hours later she was released into my arms.  It was the longest 3 hours of my life.  I had been to the NICU before with Roman and it was something I didn't want to have to experience again.  Now looking back at the pregnancy, it is strange to be so grateful that because of Roman's heart condition I was considered a high-risk pregnancy and because of this I received extra medical attention where they were able to see that she had stopped growing and that I had no amniotic fluid.  Without the ultrasounds, she appeared to be normal and not in distress and thus she could have possibly died in utero.  We just got back from the pediatrician and Addy is now weighing 4 pounds 9 ounces. She is doing really well given that babies usually lose weight not gain weight in the first weeks.
Labels: Addy

4 Kings and a Queen said…
She is most definitely someone very special. She is so beautiful and an amazing part of your amazing family. Can't wait until we are back and I can steal some more cuddles!!
June 27, 2011 at 9:25 PM

jane said…
Congratulations! She is beautiful. What an emotional roller coaster. Wishing you a fast recovery. Sending you lots of hugs!
June 28, 2011 at 4:37 AM

Arctic Mum said…
Oh, quite a dramatic story, so good you managed to keep calm all the way. And it's fantastic that there are doctors and hospitals who take care of us. I'm so happy for you!! I bought some newborn clothes today, in the smallest size. Guess it's a sign that things are getting close when the urge for doing that comes along.
June 28, 2011 at 5:49 AM

Company EIGHT said…
Oh Kelleyn, she is beautiful!!! What an experience--I'm so glad you had such great doctors that were on top of it, and that she is here safe and sound.
June 28, 2011 at 9:44 AM

Francesca said…
So glad everything turned out ok, and that the perinatologist acted quickly. I had no allergic reaction to the epidural, and still it took me about two months to recover from my emergency c-section. Hope you recover fast, and have help around the house at the moment. Hugs.
June 28, 2011 at 10:00 AM

Emily said…
Oh Kelleyn, what a story. I'm so glad the doctors were playing close attention, and I'm so glad she's okay and home and with you.

Oh honey, how are *you* doing? Take it easy with yourself, okay?

Karen @ Pieces of Contentment said…
Wow, that's quite some story. You have your beautiful little bundle to hold and love already. Thankfully all seems well.
Our twins were just over 5 pounds each. I felt like I was playing dolls with them, they seemed so small compared to my other babies.
June 28, 2011 at 11:54 PM

Bonnie said…
Wow what a miracle!! I am so grateful that everyone was doing their jobs and listened to their gut!! Its so amazing she was able to be released and come home, she is a wonderful gift to your family!!
June 29, 2011 at 2:06 PM

tanïa said…
Congrats to you and your family, Kelleyn, and welcome on earth, little Adelaide Louisa! She is cute as a button! So glad the doctors and you did your best and she is well home now! What a lucky girl! She must have very proud big brothers! :o)
June 29, 2011 at 3:28 PM

;) said…
Félicitations! An angel is born.

Everything Beautiful Shay said…
What an amazing story!!! One to tell for a long time~ a miracle. I was once sent to the hospital early and it didn't turn out happy. I am SOSOSO thankful Addie is safe and doing well. She is a precious doll!!! Bless you all!!!
Sharon
June 30, 2011 at 8:54 AM

Unknown said…
So glad everything went well and you had that extra medical attention. I love her leopard print onesie!
June 30, 2011 at 11:42 AM

Cate said…
Miracle Girl! She is beautiful and clearly strong despite being pint-sized. Congratulations, Kellyn, to you and your family. You all must be so happy to have her here.
July 1, 2011 at 11:02 AM