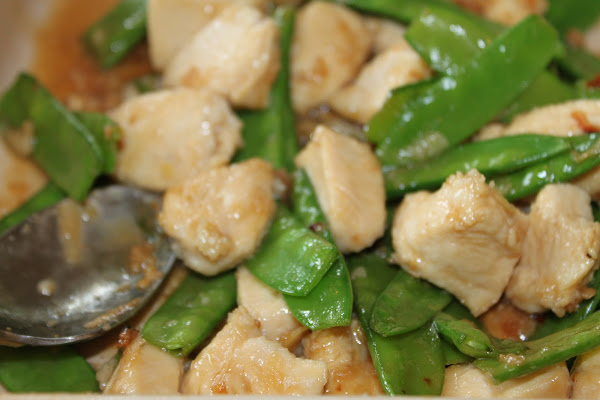 Do you ever get in a cooking rut? I feel like I have been in one for a long time. Sticking to recipes I know my kids will like, and making the same things over and over. The only problem is that I like variety and cooking the same thing is kind of boring. Leaving me often dissatisfied when walking away from the dinner table despite the food being good. Anyway, I am on a mission to try at least one new recipe a week even if my children don't like it. Tough Luck! This week I made General Tso's Chicken. I found a lighter version of it in Martha Stewart's magazine. So yummy, but not a hit with my children because they don't like snow peas. The recipe is pretty simple too.
General Tso's Chicken: 1 1/4 cups of brown rice or white rice whatever you like best. 1 tablespoon of cornstarch. 1 pound of snow peas trimmed. 4 garlic cloves, sliced. 2 teaspoons grated peeled fresh ginger. 3 Tablespoons of light brown sugar and 2 tablespoons of soy sauce. 1/2 teaspoon of red pepper flakes and 2 large egg whites. Salt and pepper. 1 pound of boneless chicken cut into 1 inch pieces. 2 tablespoons of vegetable oil. Cook rice according to the directions. Then in a large bowl mix cornstarch and 1/2 cup water stir until smooth. Add garlic, snow peas, ginger, and soy along with red pepper flakes. Set to the side. In another bowl, whisk together egg whites with the remaining 3 Tablespoons of cornstarch and add chicken. Heat a large nonstick skillet with 1 tablespoon of oil. Add 1/2 the chicken and cook for about 6-8 minutes. Then remove and add the remaining chicken and do the same. To the pan add snow pea mixture and cook for about 3-5 minutes until snow peas are tender. Return chicken to pan and stir coating chicken in the juices. What I think is really key to this recipe is that you cut the pieces small and only cook for the allotted time. The chicken was super soft, not dry. I hope you enjoy this recipe.
Labels: recipe

Francesca said…
Don't start me on the boredom of cooking family meals on a daily basis. Variety is the only way out of it! Hope your family liked your Chinese chicken dish.
March 16, 2011 at 4:37 PM