This and That Fall Edition 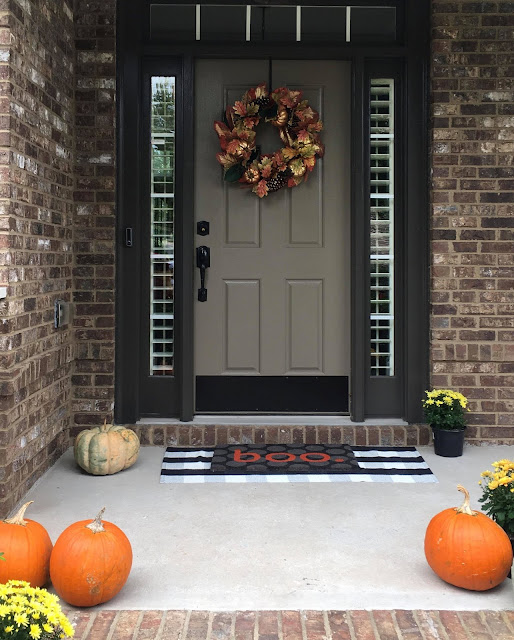 Hi!  Hope you are all doing well.  It has been a couple of weeks since I have last written.  In all honestly, I have just been busy, but mostly with just mundane things like dentist appointments, doctor appointments, and then just the normal daily things like Karate for the girls, piano, and German school which I am teaching the children myself.  I just couldn't bear to pay 3k for on-line schooling.  I am actually really enjoying teaching the children myself though I don't know if I will continue it once everything goes back to normal.  The little girls down the street have joined us for our German school lessons and are having fun learning too.  I am just not sure how I am going to teach them the grammar when I don't exactly understand it myself, but I will figure that out when it comes time to do that.  My husband came home on the 4th after being in Europe for two months and it is so nice having him home.  My best friend also came for a late birthday celebration.  She came for the weekend and brought her daughter who is the same age as my 9-year-old girls.  They had a blast.  As a treat, we went to the nail salon and got ourselves pedicures.  Then my mom watched the girls, so I could go out to dinner with my friend.  It was a perfect weekend.  Sadly, I didn't take any pictures.  Well, the real reason I came on here today was to share a few things with you.  I have been reading a book series by Richard Paul Evan who is one of my favorite writers. You might be familiar with his books if you ever read the Christmas Box.  The series I am reading is called the Broken Road which are three books that cover the life of author and sales pitchman Charles James.  James is supposed to be dead as he was listed on the flight manifest of a plane that crashes.  James who is going through a spiritual crisis decides to use the situation to his benefit and check out from life to figure things out, and the way he decides to do this is by walking the iconic route 66.  His story is about a man who accesses the choices in his life, his happiness, and leads in forgiveness and redemption.  This series is so good.  What I love about his books is that if my children were interested in reading them I wouldn't be embarrassed by the language or sexual acts; however, these books are very much for grown-ups which are becoming harder and harder to find.  Next, I wanted to share with you a few things I have watched either through TV or movies that are well worth the time.  The first is a documentary called My Teacher the Octopus which is a fascinating story of a man who has become disenchanted with life and takes to the ocean to only come away learning so much about himself and about the planet we live on.  I would have never guessed how highly intelligent Octopuses are and found the documentary extremely fascinating.  The next is a movie called Dare to Dream which is a romance movie starring Katie Holmes and Josh Lucas set in New Orleans.  I won't say much cause I don't want to ruin the story, but it is good.  Following this movie, another good movie to watch is a movie titled Called to Spy which is set in England during WWII and is about their recruiting of female spies.  The last TV show is called Enola which is a Netflix show though I believe you can watch it elsewhere if you want.  The story is about Sherlock Holmes younger sister though who knows if Sherlock ever had a younger sister.  Anyways, the story is good fun and very witty and is something you could watch with the whole family though I am not sure my boys would be as equally interested in watching.  Well, I got to run.  I have a bunch of things I need to do today.  Have a great weekend.
Labels: daily life

DUTA said…
Are you proficient in the German language? Good for you and for the kids! Any additional language is an asset.
Not to worry about "once things get back to normal", as it will probably be a new kind of normal.
October 16, 2020 at 3:07 PM

Mariette VandenMunckhof-Vedder said…
Dearest Kelleyn,
So happy for you to have your husband back home again.
Most people cannot relate to this but I certainly can!
In 1987 was our worst year I guess, Pieter had gone to Japan, China, Hong Kong and Taiwan to visit and lecture at universities as a Citizen Ambassador. I flew to Europe and Pieter arrived from Taiwan there. He took his Campbell colleagues who'd flown in, to the UK, to The Netherlands and to Switzerland.
We took my Mom & Dad in tow, back to the USA and I mainly toured them in the Carolinas and such while Pieter had to work. Then I flew bak with Mom & Dad and did my 2 weeks of consulting in Germany near Bremen. Meanwhile, Pieter went for Campbell Soup to Australia and New Zealand... I flew back home with a Dutch businessman and after he'd got dropped off at the Atlanta (he was our house guest for a couple of days) we finally were 'under us' again...
Wish you lived closer to us as I certainly would love to help out with the German, we both managed that as well as our mother tongue. But you got a great 'native' backup!
We stayed at the Hyatt Regency Suites in Marietta and from there I drove the 129 km (yes, we remain metric!) to Blue Ridge Scenic Railroad for the 2-hour ride to Copperhill, TN. The weather was okay, not sunny but dry. Only some drizzle on the way over and back. Did finally pass the exit to Cummings... so I learned about our huge state.
Compared to Bryson City, NC where we rode the Great Smoky Mountains Railroad in first class, this was mediocre. Loud and very noisy with lots of kids aboard... no classes, all mixed! For about half the price for the 2 hours compared to some 4 hours with lots of courtesy and service. We both were shocked to view some extreme poverty when departing from Copperehill, TN... they talked about vegetable gardens by volunteers for growing veggies for their needy.
Enjoy the season and stay busy and well!
Hugs,
Mariette
October 16, 2020 at 6:33 PM

junieper/Jesh said…
You are so brave to teach German! I would understand the grammar, but to explain it in English would be another matter!
I am surpised about your husband - I thought there was a travelban on Europe, or is it over? Or, can he travel because he has dual citizenship? Am asking because we haven't seen our son for two years, and really want to visit him, Maybe during the holidays? So, let me know, please. Thank you! Thanks for taking the time to give all Seasons ad update on your latest explorations:):) Have a beautiful week, Jesh
October 18, 2020 at 9:21 PM

Anonymous said…
This comment has been removed by a blog administrator.
October 20, 2020 at 2:11 PM

NCSue said…
Nicely decorated. I'm not a fan of Halloween - it seems the emphasis is now on the creepy, and it's nowhere near as innocent as it was when we were coming up. But I love autumn and the fall decorations here are lovely.
Thanks for sharing at https://image-in-ing.blogspot.com/2020/10/at-aquarium.html
October 21, 2020 at 1:47 PM