Hi!  How are you?  I hope you had a good week.  Mine was absolutely nuts!!!!  On Monday, I celebrated my 47th birthday.  My mom took me to lunch and in the evening I celebrated with the children with a cake from Baskin Robins.  The cake was more for them than for me. Then Tuesday, shortly after breakfast I get a call from my best friend who says she is on her way home from her sisters and she wants to come and take me out to a belated birthday dinner.  My best friend lives in Colorado, but she works for the airlines and so she can just about catch a flight anytime she wants.  I was thrilled, but that meant I needed to juggle a few things around. We enjoyed a lovely evening out at a local restaurant enjoying each others company and then grabbed an ice cream at Jeni's before heading home.  I took her to the train station at 5:00 a.m. so that she could fly home in time to pick her daughter up from school.  Around 1 a.m. Roman, woke up with a stomach bug and spent the day throwing up and my mom followed suit not too long after.  I am crossing my fingers that no one else gets sick. I honestly don't have time for anyone else to be sick right now. On Wednesday, we celebrated Avery's birthday followed by piano lessons. Thursday and today I have spent packing because we are heading to Orlando, Florida for the week. It is fall break here in Georgia.  Praying for good weather. The forecast does not look to promising.  On another note, Roman got two parts in the school play.  He will be in the play James and the Giant Peach.  He is so excited! OK!  Are your ready for a movie review?  Let's go! 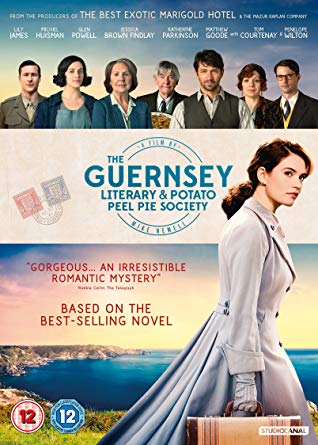 The Guernsey Literary & Potato Peel Society has to be one of my favorite movies of the past couple of years.  So well produced and if you loved Downton Abbey than you will for sure love this movie because you will recognize a couple of the actors in this movie from that show.  The story takes place in post-War War II on the island of Guernsey.  If I am being honest, I really had no idea where this island was!  I thought it was just off the coast of Great Britain, but if you look at the map it is actually much closer to France.  The island was occupied by the Nazi's.  After the war, Juliet a London author receives a letter from a member of the Guernsey Book Club and Literary Society intriguing interest to visit the island. Juliet finds more than just a story of bravery.  This movie is a must watch! 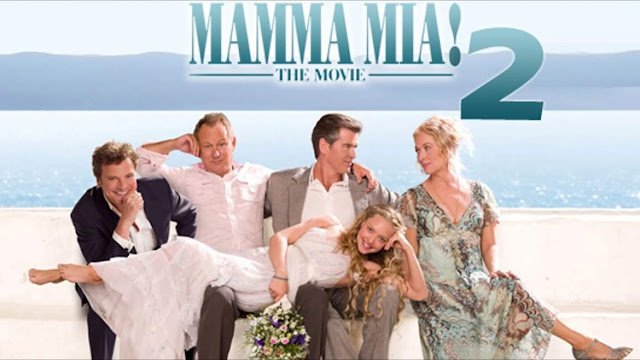 Mamma Mia 2 was in the theaters this summer and may still be in the theaters where you live, but I have to say this movie was a complete fail for me.  Despite having an amazing cast of actors the plot of the movie was week and the newly written songs to further the story did not do justice to the original Alba score of music.  If you must see this wait till it reaches your local Red Box or until you can stream it for 99cents.

I  love Stanley Tucci and I love Emma Thompson, but The Children's Act failed to deliver a good storyline or maybe I just missed the point?  If you have seen this movie let me know what you think.  The story revolves around a young boy who belongs to a religious faith that prohibits blood transfusions.  The court must decide what further action will be taken in regards to his medical health.  Does a 17-year-old and his parents have the right to refuse medical treatment?  At the same time, Emma who plays the judge in this movie who has given her life to her career marriage is falling apart.  While the movie suggests that she and her husband begin the path to making things better, the storyline is week. I left watching the movie with the feeling of the story being unresolved.  The movie does have you question the idea of What role and right does the government have in making medical decisions? 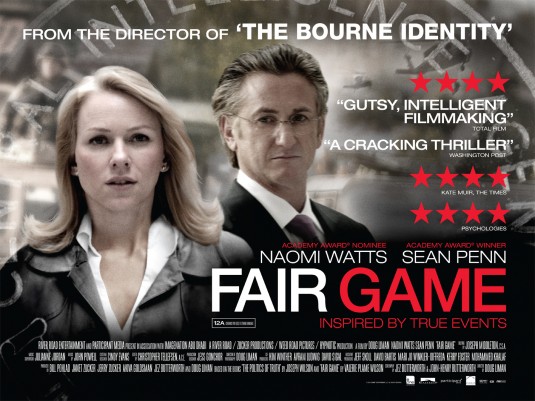 Fair Game is for those of you who love political dramas.  The movie came out in 2010 and is now on DVD or can be found on Netflix.  I sadly don't watch the news and I am often to busy to read the newspaper, so I was not familiar with the storyline though many of the elements were very familiar to me.  The Story is about Joe Wilson and his wife who played a role in political history in regards to the United States entering the war post-9-11.  A very well storyline and very informative.  Not a documentary, but based on true-life events.  I give this movie a definitive thumbs up!

Last but not least a new series titled Jack Ryan on Amazon for those who have an Amazon Prime account. The story-line is reminiscent of John Grisham or Robin Cook books or if you loved movies like the Pelican Brief and The Client.  Then you will love this series.  Jack an ex-military officer, who is currently working for the CIA, as an intelligence analyst is thrust into the field as his opinion gains attention from the agency director.  The series is well done and will have you on the seat of your pants.

Well, I am off!  I have the carpet cleaners here and I have to run to the store to grab a few items for our trip.  I will see you when we get back.  Have a great weekend!
Labels: movie review

William Kendall said…
I haven't heard at all of that first one. As for Mamma Mia 2... well, not a fan of musicals, and definitely not a fan of ABBA, so obviously I'm skipping that one.
September 21, 2018 at 3:42 PM

Holly said…
I hope everybody recovers from the stomach bug soon. thanks for the movie reviews I'll wait till Mamma Mia 2 comes out on Redbox and I think I have the Guernsey potato Society on Netflix. Have a great trip.
September 21, 2018 at 6:48 PM

Beatrice P. Boyd said…
Belated Happy birthday🎂. Hope that your family members are feeling better, Kelleyn. Thanks for all the reviews and I plan to watch Mama Mia 2 when it gets to Netflix as the original did. I read the Guernsey Literary and Potato Peel...book and so the Netfkix movie was a must-see for me and my husband watched and enjoyed it too. And, like you, I also looked up Guernsey. Hope you and your family enjoy the FL trip.
September 22, 2018 at 7:46 AM

Sallie (FullTime-Life) said…
happy Belated Birthday -- sounds like you had a lovely extended celebration! Hope everybody is feeling better by now. I read and enjoyed the "Guernsey ..." book and have been looking forward tgo the movie.
September 24, 2018 at 3:51 PM

Angie said…
Amazing you even had time to post! Good on ya! Hope you enjoy your trip to Orlando and that everyone is healthy for it! Belated Happy Birthday! My in-laws and our son recently traveled to Guernsey, so I am very excited to see this movie … thanks for the reviews!
September 25, 2018 at 1:23 AM

handmade by amalia said…
I think I would have liked The Guernsey Literary & Potato Peel Society if I hadn't read the book. The book was amazing and the film, while quite good, did not live up to it. I agree the Mama Mia is horrible and Jack Ryan was totally addictive. So, all in all, we are in total agreement :-) Happy Birthday!
Amalia
xo

Heather{Our Life In a Click} said…
I have to get back to Jack Ryan, we've only seen the first episode. I've been wanting to see the Guernsey movie, it's on my Netflix list. I read the book a long time ago but I don't remember much about it. I was underwhelmed by Mama Mia 2 as well but I liked seeing the cast back together!
October 4, 2018 at 4:56 PM