To The Emergency Room

This week we had a little scare, the girls had finished their dinner and I was cleaning up.  I had asked the girls to go to their room to get their jammies on as they had been cranky. I thought an early bed time was just what they needed. The girls quickly got in their jammies, but still full of energy found  that jumping on the bed was way to much fun until well it wasn't. Ivy fell forward and her face hit the edge of the bed which caused her tooth to pierce the inside skin just below her lip.  She screamed out and I came running. There was blood every where, but that didn't scare me too much as mouth wounds, nose bleeds, and so on are often pretty bloody.  I looked in her mouth and new it was pretty serious.  Where to take her was the question?  We have only been to the doctor once since we have been here and it was only to get some paperwork signed for Ivy to attend preschool. I called my friend Marylou and asked her if she could come and give me her opinion.  Maybe I was just over reacting and maybe not stitches were in order. My friend came right away and she wasn't sure herself and so she called the ambulant to see what they would recommend. There isn't a hospital in our town and the nearest is about 25 minutes away.  She described what she had seen to the service and they said we should take her to the hospital. Thankfully, my friend could stay and off I went. My husband was out of town.  Ivy fell asleep in the car and when we got there was pretty calm. It was pretty busy that night; especially, with toddlers who seemed to have fallen too. I blame it on the full moon.  Anyways, 90 minutes later we were called back into the room and the doctor took a look at the cut and immediately said she would need stitches. Ugh! Not what I wanted to hear, but I kind of knew that when we went there.  He numbed her up which was not fun as she screamed bloody murder and me and another doctor held her down so they could put the stitches in. Poor thing!  I seriously think there has to be a better way.  My body still aches four days later!  I feel like I wrangled a bull in the rodeo.  She is fine now and at the end of the week we have to go back to get the stitches removed.  Not looking forward to that either. Well, I guess we can check that one off on our list. Visited a foreign hospital where I didn't exactly understand everything the doctor said.  We survived! 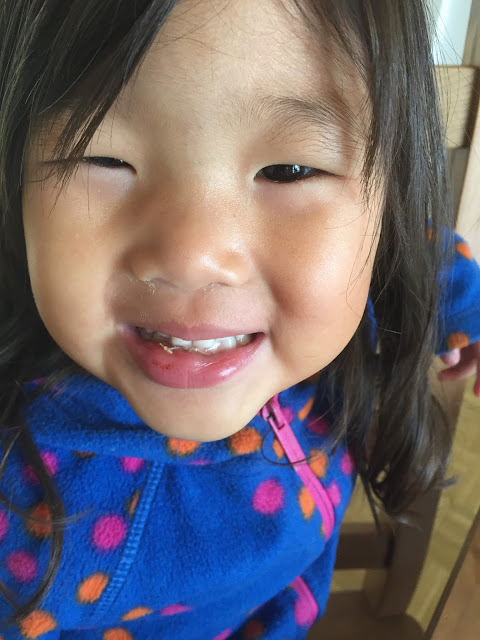 Anonymous said…
Poor Ivy! Sounds like numbing the area was painful. In the US they use a numbing topical liquid first then insert the needle to further numb the area for stitching. I would ask for this when you go for the stitch removal. Today, nothing should be painful, in my opinion. We had an ER visit to stitch the forehead after falling down three stairs and bumping in to a table. Oh well...Accidents happen. Never a dull moment. Susan
November 5, 2017 at 7:16 PM

Anonymous said…
Sorry you had to go through this - one of the panic events to happen when you are new in a country -not knowing all the customs and procedures:( Hopefully taking out the stitches won't hurt as much. I remember from Holland that insurance may not pay in such cases for the numbing (at the dentist, for example), you could get the numbing, if you would pay for it yourself. Don't know if this is the same in Germany at present time... Take care! One of these things you hopefully won't have often in a season.
November 6, 2017 at 3:18 AM

shayndel said…
Take care best wishes to you both. So glad to hear that she is doing well and to see a beautiful smile!
November 6, 2017 at 7:55 AM

Buckeroomama said…
Aww, poor thing. I hope the removing of the stitches go more smoothly.
November 7, 2017 at 12:02 AM