I feel like I am on a fast speed train.  I want to get off except I know the destination is pretty awesome.  I mean who wouldn't want to add an adorable little girl from China to their family.  Well, I know some people wouldn't and this will and by will I mean be the very last addition to our family. The car seats in my van will be absolutely full and I have no intentions of driving an airport transporter.  I digress though.  Things are moving forward in our process to adopt Ivy.  Yesterday, we got notification called the 1-800 from the USCIS  has been approved and they have now sent our application on to the National Visa Center.  This step should take a few days.  We are now about 5 weeks from departure for China.  Our passports have been sent off to the Chinese Consulate in Chicago and we should have those back by next Friday.  Fundraising is going OK not fantastic, but I am grateful for every little dollar we receive.  I am also in the process of trying to sell of a few things that we don't use any more.  Thankfully, my husband won an award this past week at his work and this came with a case prize (not large), but as I said every little dollar helps.  He also had some clients who finally paid up on some outstanding bills. Yahoo! In other news as in two weeks ago, Roman participated in the 2016 Pinewood Derby with big help from his brother Harris who helped him cut out his car, sand it, and paint it.  He won the first rounds but ended up loosing in the end.  The great thing about Roman was he was just happy enough to participate.  I love this about him! 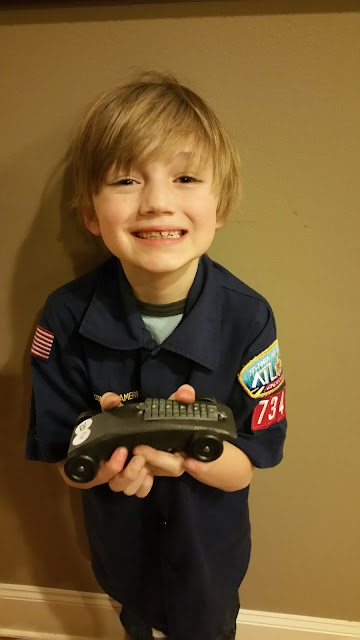 Theresa said…
Wow, another child! What a blessing :)