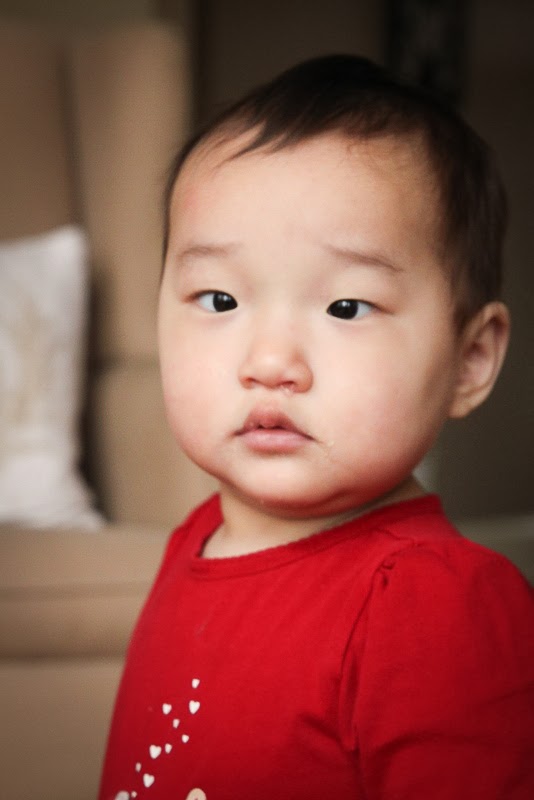 Tomorrow will mark the one month date that this beautiful little girl was placed in our arms, it seems like yesterday, but at the same time I can hardly remember life without her.  She is a vision.  Her name in Chinese means Beautiful View and I agree with that! She is a gift from God and I am so grateful that I get to be apart of her life.  One month ago, we left our hotel room at 9:30 a.m. all nervous with butterflies in our stomach like it was Christmas morning and at the same time scared that she might not like us or have a very difficult time adjusting to her new life outside the orphanage.  We boarded a transporter van with 4 other families and their extended relatives and headed over to the civil affairs office. The building was concrete and large.  The sky was grey and cold.  We entered the building to the side all wondering if our children were there and not really sure how it was going to work in terms of getting our children.  Abby was there and we all cried for Stephanie as she was handed her daughter.  The camera's began snapping then we gave them their space.  Rita our guide took documents from us that were needed to be given to the officials.  Their were other families from other agencies of which some I knew of through Facebook.  I introduced myself to one mother and made small talk with Erin and Stacy as we waited for our children to arrive. The room was freezing and uncomfortable.  The couple of sofas in the room were covered with others bags, and  I really wanted to take off my coat, but as I said it was too cold.  Then I heard  Frank's voice saying, "Avery is here!  She is here."  How did she get into the room without me seeing her come in?  I raced over to his side and before me stood this beautiful little girl all bundled up and scared to death.  She was with two people from her orphanage. The smiling man pushed her towards my arms.  She screamed.  She was terrified.  I tried to calm her down, but she was arching her back.  I then placed her into Frank's arms and within minutes she calmed down.  Still scared, but she wasn't crying.  To be honest the rest of the  morning is kind of a blur.  I know we signed some documents and  we cried tears of joy as other families were united with their children.  Photos were taken for official documents and a ton of photos were taken in general for families scrapbooks.  Eventually, it was time to leave, and she was ours!

A month later and she smiles constantly.  Eats just about everything you put in front of her!  She loves me and will cling tightly to me around strangers.  She says about 12 American words and has forgotten all her Chinese which wasn't very much much.  She loves to be ticked by her papa and will stick up for herself when her sister Addy isn't being fair.  She is such a fast learner!  We call her the copycat because she is always mimicking those around her such as last night she was mimicking her brother Roman who was making armpit farts.  Classic!  It was too funny to watch.  She loves music!  Anytime music comes on her body begins to sway from side to side.  We love her so much!  We look forward to watching her bloom.
Labels: Avery

Dana said…
My heart is so happy for you and your family. This is just an amazing part of living on this planet, loving and caring for others, simply amazing.
d
February 7, 2014 at 4:16 AM

Everything Beautiful Shay said…
A beautiful gift from God!!! Answer to our prayers. Still remember our very first convo way back about adoption. Isn't it a beautiful thing??? Xoxoxo
February 7, 2014 at 7:01 AM

Everything Beautiful Shay said…
This comment has been removed by the author.
February 7, 2014 at 7:01 AM

Anonymous said…
What a heart-warming story. Thank for sharing with us. A great vision.

Metropolitan Mum said…
Awww... your posts always make me cry recently. I am so happy for you and Avery. I am not surprised that she blossoms in your care, in your family, with your love. You are doing such a great thing here, it's painful to even begin thinking what would have happened to her hadn't you found your way to each other.
Tons of love,
Deborah xx
February 7, 2014 at 3:40 PM

Formerly known as Frau said…
Wow a month and it didn't take her long to love her new Momma! I love hearing her progress and personality coming out. Such a gift!
February 8, 2014 at 10:05 AM

nadine paduart said…
now. if this adventure didn't start with vision, all these months, perhaps even years ago! and so now, avery's been with you a month already! time flies, and vision thrives.
well done, all of you!
n♥
February 9, 2014 at 12:27 AM