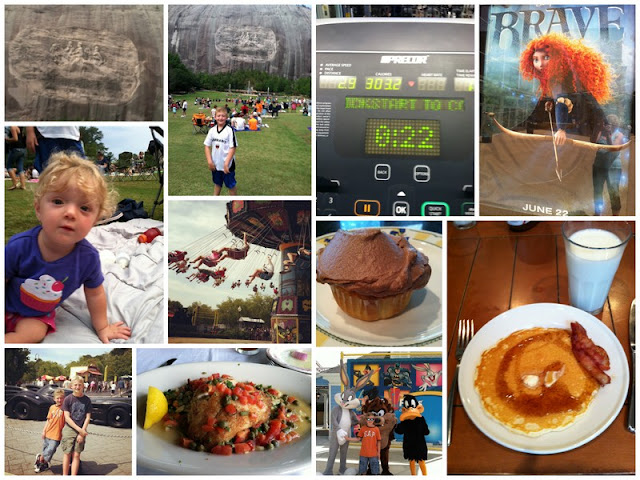 This past week has been totally crazy!  Since coming home we have been constantly on the go which totally explains the lack of  blog post.  We had an amazing time in Europe, but summer wouldn't be summer without our favorite Georgia summer time traditions such as Stone Mountain, Six Flags, and going to the movies.  This past week: I took two different children to the doctors for yearly check-ups, registered two children for soccer, went to see Brave and Avengers, went to Stone Mountain and then to Six Flags, made cupcakes, spent a few afternoons by the pool, went to dinner with my husband for our anniversary (I had the pan crusted tilapia), reunited with pancakes-yum!, then made it back to the gym, and spent a couple of hours at Target buying school supplies for the three oldest children.  That last one should be classified an Olympic event.  I totally had a headache by the end and was shocked by the $180 bill.  Thankfully, we are reusing last years backpacks.

Oh, Nana came and spent the night this week.  She also took Winston and Roman to see Diary of a Whimpy Kid, and Harris to see Batman.  I know what you are thinking a ton of movies.  Well, it is hot here in Georgia.  The temps have been in the high 90's just about every day  with humidity is is more like a 105 degrees.  Going to the movies is a great way to escape the heat.  Also, going to the movies is pretty expensive in Europe, so except for Winston who went to the movies with his friends when he was at his Oma's they didn't get to see any movies.
This week is looking to be equally busy as we have another doctor appointment on the calender, attended a birthday party today, I am watching a friends children so she can move, we have two open houses to attend, and a back to school dinner at Red Robins.  Then school starts on Thursday.  I am not looking forward to waking up at 6:00 a.m. to get Winston and Roman on the bus by 6:40 a.m. Roman is going to have a hard time getting up as he is my child who likes to sleep in.  I just think it is nuts, but there is nothing I can do about it because driving them to school wouldn't allow them to sleep in any later.  Well, I hope you are having a great weeks and are enjoying summer.  What is on your calender this week?
Labels: daily life

Formerly known as Frau said…
Hard to believe they start school so early in the year and day. I hope the school has A/C ! Starting the early mornings is the hardest part of school starting at least for those first couple weeks. Sounds like you had a great summer.
August 7, 2012 at 8:51 AM

Angela said…
It is that time of the year that the kids go back to school. Glad your Summer was fun. Finally we are getting cooler weather here. The drought was severe in this area of the country. Have a great weekend!!
Thank you for your visit and comment!
August 12, 2012 at 10:17 AM