Skip to main content
Labels
Posted by likeschocolate May 31, 2010 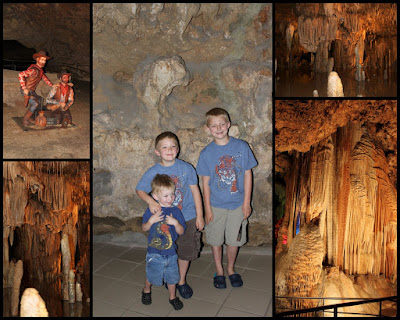 Just three miles off of exit #230 on Rt. 66/hwy 44 south out of St. Louis in the town of Stanton you will find one of the coolest caves I have ever been to called the Meramec. Seriously these are cool. The prices are not cheap with adults costing $19.50 and children $9.50; however, Roman was free. The tour last over 80 minutes and the trails inside are easy to walk along with few stairs to climb. If you have ever seen the old 1960's film of Lassie or the late 1970's film of Tom Sawyer then you have seen clips of this cave. Once used during the civil war for ammunition making and later a hang out for the famous bandit Jesse James you will not be bored. Next stop Branson, Missouri. See you there!
Labels: Missouri

Dim Sum, Bagels, and Crawfish said…
Wow! That does look like an amazing pit stop...my kids have never really been inside a cave like this before. Hope we can make it there one day. Thanks for sharing it.
June 2, 2010 at 1:47 AM