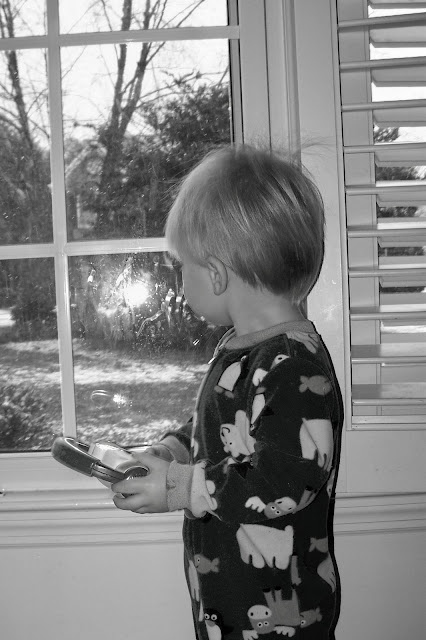 Roman watching the snowfall Yesterday it snowed here in Atlanta. We couldn't believe it because just this past week the weather was warmer and the trees were blooming. I guess that is what I get for bragging to my friends in colder northern climates. The snow was so pretty as it came down in giant flakes. Unfortunately, there was not enough of it and it was too wet for the boys to go out and make a snowman. They were so disappointed. Snow is not unusual here in Atlanta, but in the last 6 years, I think it has only snowed 4 times. Other titles for this post were "What the " and "Let it snow Let it, Snow." Even though the roads were clear where we lived, they closed schools down for the day. I guess there was more snow in other areas and they did not want anyone to get hurt; especially, from the black ice.
Labels: daily life

Company EIGHT said…
How fun!! I love that they closed the schools. It was like that where I grew up though--rarely snowed, but when it did it was so exciting!
March 2, 2009 at 12:44 PM

Unknown said…
That's so funny that they closed down schools! When you only get snow 4x in 6 years, snow is exciting. I'm more than over it, thank you. :) I bet the boys thought it was the coolest thing ever!
March 2, 2009 at 4:39 PM

Sunshine Marketing said…
Hey girl! I cannot find your e mail anywhere! Thatcher also has his sedated echo on March 11th. NOT excited about it at all. I will keep you posted! Send me your e mail so I can check in on you from time to time! Good luck with Romans appointment next week!
Much Love,
Tami
Thatchers mom TOF
March 5, 2009 at 7:16 PM

Jamie said…
I'm mad because the snow killed my tulip magnolia blooms that were just starting to open, but those huge flakes were so beautiful.
March 7, 2009 at 4:50 PM