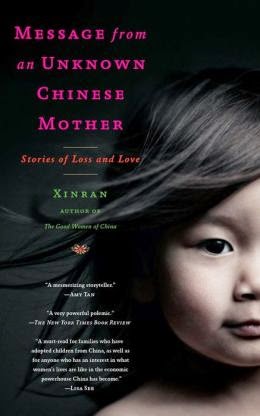 This weekend I had the opportunity to attend a conference for mothers who have adopted children (more on that later), and while speaking to another mother she asked me if I had read a book titled Messages from an Unknown Chinese Mother.  I had not read it!  The reason why she asked me if I had read the book was I told her I didn't think about Avery's birth mother that much.  If I am being honest, I don't think of her that often.  Not because I am afraid that by thinking about her or talking about her Avery will somehow love me less, but because I can not put a picture to her face.  I do not know if she is old or young. Was Avery her first child or was Avery a second child?  Were her parents married or was she conceived out of a one night stand or to a prostitute? Is she short or tall? Does Avery look like her or her father?  The list of unknowns goes on!   I do not have an answer to any of these questions and it is likely Avery never will either as it is extremely hard for adoptees from China to find their birth parents.  I text ed my husband and asked him to purchase the book via Amazon for me and the book arrived on Monday.  It is a difficult book to read.  So heart wrenching at the same time I am grateful to have had the opportunity to have read it.  It has given me a broader education as to why mothers are abandoning their children all over China.  Today over 120,000 children from China are living in over 27 countries.  That is a lot of children.  They are the lucky ones as so many more were killed.  Before going to China I had heard stories that some children were drowned in rivers like kittens.  In my narrow understanding, I thought many of these children who are mostly girls were simply killed because they were girls.  It is more complex than that!  It is even more complex than China's One-Child Policy rule.  The issue goes even deeper of beliefs that having a girl first will bring ill will on one's household and laws that do not even count woman therefore when farmers go to acquire the land they are not allowed to get land unless they have a boy child thus causing a family to suffer from lack of food.  In the book, the author accounts for one story of a man she had met who had abandoned his daughter.  When she questioned him on why he told her his story of being on the run.  He and his wife left their village so that no one would know that they had a daughter.  His parents had begged them to leave.  In the time they were on the run he had abandoned 4 children with his wife being pregnant with the 5th.  If the 5th was a boy, he and his wife could go home to their family and if it was a girl she would meet the same fate as until he had a boy he could not return home.  He would lose all his family's property if they did not have a boy.  Obviously, all girls are not abandoned and you can even adopt boys from China.  Some children are abandoned because of their medical issues simply because they were born into a medical system that will not treat you unless you have the money upfront.  After addressing the why, the book goes on to tell the grief of these mothers.  Did you know that has the largest suicide rate of is woman?  The book tells the story of a woman who was forced to do away with two of her daughters.  Her husband leaves her and her in-laws treat her badly.  The woman tries to move on with her life, but one day, while she is working at her new job in a restaurant the grief of her losing her daughter, is too much to bare when she sees a family celebrating a little girl's birthday. The woman tries to kill herself.  When questioned why she tried to kill herself the woman stated, "Why couldn't my daughters have lived? Why did I have to kill my daughter? I wish my daughter could have a mouthful of delicious birthday cake, just one mouthful! If only they could have put on those pretty clothes, just for one day!"  My heart aches for this mother and all those mothers all over china who have either watched their children be murdered or who have had to give them away.  I will hold my daughter a little tighter each and every day for the sacrifice and heartache her mother has made.  If you have gotten this far, I appreciate you taking the time to read these words as I know they are not easy to read.

Everything Beautiful Shay said…
Whew! Heart breaking yet enlightening. I need to read as well. Blessings and love sweet friend!!!
March 11, 2015 at 8:55 AM

Menthe Blanche said…
It's always very hard (or impossible) to find out what exactly happened when adopting a child. Indeed, this book should be interesting. It brings you answers but more questions maybe ...
March 11, 2015 at 10:06 AM

Unknown said…
A close friend adopted two brothers from Etiophia...their grandparents live so...sometimes she asks herself if there will be a time, to "bring" them back to their family and origin.
Too many questions and too many different situations...imposible to generalize.
Just time will go giving the answers.
The most important thing is Avery, and she will help to make the path.

Buckeroomama said…
I wonder if these families who abandon their daughters are mostly from the rural parts of China. I would like to think that the ones who have had proper education and/or have been raised in more cosmopolitan areas do not have this kind of "backward" thinking.
March 11, 2015 at 10:28 AM

Theresa said…
That's really incredible. The population problem is such a strange strain on the world, on our resources, on our societies, and the human response to solve it (in China) has so many repercussions. How much suffering we must go through as humans. It makes us want to embrace the joy and happiness we can find in life all the more.
March 11, 2015 at 2:08 PM

nadine paduart said…
it is heart stopping, such truth. how cruel are traditions, and how hard can life be? i can imagine you being relieved you can do this to help, and yet, you may never get to the bottom of your own adoption circumstance, for the benefit of avery... i think it is good to be realistic on the subject, but that's all you can do. you are realistic parents, and avery got lucky too... x n♥
March 11, 2015 at 11:34 PM

Tera said…
I have been thinking of adoption a lot these days. Before I had my daughter it is what I wanted to do but always felt overwhelmed and lost once researching it. I still would love to adopt. I still research and become overwhelmed. I am reading about only children and China is mentioned over and over. I was not aware of how deep the sadness was regarding women and babies and China's situation. So very sad.
March 12, 2015 at 2:06 AM

Shauna said…
My dad had a serious girlfriend from China, not that long ago. She would talk about seeing babies floating down certain rivers. It's unimaginable in a place like this where we live. But, there are atrocities going on all over. These things are so hard to hear and read. Thanks for sharing. My heart goes out to anyone who is put in a position like that of those in this book. Love,

Always wear your tiara said…
That book is one of the hardest I have ever read but one I feel every adopted paerent should read, It is so informative.. I cannot imagine being forced into that decision.
March 12, 2015 at 6:18 AM

Francesca said…
life can be valued so little by society - but to those who give life, to a mother, each child is precious, even when forced to give them away.
March 12, 2015 at 10:29 AM

Anonymous said…
this was a difficult read ... and giving a child up for adoption must be the most difficult decision to make ever.
March 12, 2015 at 6:29 PM